Home News Metro Paying for Abuse
SHARE
Facebook
Twitter
On Oct. 25, 2005, Patsy Keifer, a homemaker from Cleburne, was picked up on suspicion of driving while under the influence and brought to the Johnson County jail. 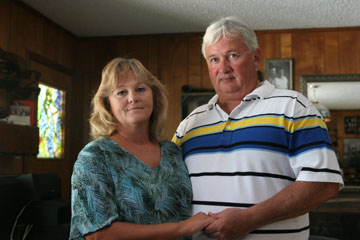 Within a few hours, the night turned to nightmare as she was strapped naked into a restraining chair while jail guards wandered by (“Bullies With Badges,” Sept. 12, 2007). More than two years later, Keifer finally has closure and Sheriff Bob Alford, who runs the jail, says recent policy changes will prevent what happened to Keifer from ever happening again. Keifer sued Johnson County over her mistreatment, and in late February, Johnson County officials agreed to settle the suit before it went to trial. She won an undisclosed amount of money, plus an official apology.

The terms of the settlement included Keifer’s agreement not to reveal the details. “I’m glad to have this behind me,” she said, “and to know that changes have been made to ensure that no one else will have to go through what I went through.”

The chair that Keifer was strapped into throughout her 10-hour ordeal – during which no one at the jail came to check on her, despite several guards having looked at and commented on her through the small door opening – was described by her attorney, Mark Haney, as draconian. “It looked like something made in metal shop in the 1960s,” Haney said. “It had a big, wide seat and a straight, high back. It was made of a metal tubular frame covered in plywood that was covered in pleather – maybe Naugahyde. It faced the door and was tilted back just enough so that any body fluids would collect under the prisoner’s legs.”

Haney already knew from his client that she had been strapped in with her legs spread apart. But when he looked at the chair, he also found that “unbelievably, there was a Nazi swastika and the words ‘white supremacy’ or something like that scratched into the back.” Sheriff Alford, who fired the guard responsible when he learned of the incident, told Fort Worth Weekly that the chair is now gone. “We have a more modern, prescribed chair [at the jail] now, and there’s a requirement that prisoners will have gowns on at all times.” And, he said, prisoners no longer are seated facing the door, jailers are required to check on restrained prisoners every five to 15 minutes, and medical personnel must check on them every hour.

Keifer’s suit charged Johnson County with violating her civil rights. “The way it works in civil rights cases is that you’ve got to prove there was an actual policy in place that was created or maintained that goes against the Constitution,” Haney said. “And in this case, the state had no right to punish Keifer before she was found guilty of anything. And yet, because of the policy in place at the Johnson County jail, she wound up being put into that restraint chair for an extended period of time. And Sheriff Alford admitted that was the policy.” Alford’s admission came in a phone call he made to Keifer after she filed suit. He taped it himself. During the call, in which he also admits that he was told not to contact Keifer, he said changes have been made in the policy regarding use of the chair.

It was that admission, Haney said, that pushed the lawyers representing Johnson County to settle rather than go to trial. “That recording was the catalyst in getting this resolved.” The agreement cost the county money and an apology and forced changes at the jail, but it also kept county officials from having to admit guilt. “I think the facts in this case were so horrific that nobody wanted to make a record of it in court,” Haney said. “And then too, [damages for] Civil Rights Act violations are not capped financially, so the county did the intelligent thing in settling.” It’s not the first time that Haney has gone up against Johnson County. A couple of years ago he won a settlement for the family of a man who hanged himself in that same jail, and he currently is handling a case involving another Johnson County jail hanging.

“In that case the prisoner was arrested in Cleburne and brought to the Johnson County jail. It was known that he’d tried to commit suicide a week earlier, and the admitting officer wrote on the admission form that the man had suicidal tendencies,” Haney said. “Nonetheless, and unbelievably, he was provided with bedding materials and put in a ‘psych cell’ just off the main admitting area. But he was not monitored, and when a jail trustee came by with a food tray about 30 minutes later, he was already dead. He’d actually been dead 15 minutes by that time.” In that case, a state appellate court recently ruled against Haney’s client, but he is appealing that decision further, to the Texas Supreme Court.

The Johnson County jail has figured in several Fort Worth Weekly stories over the past two years. Problems described by former inmates and jail personnel include inadequate health services, mentally ill patients being housed alongside other prisoners, and a number of guards who’d had sex with prisoners. In one case a prisoner who was ill was not brought to a hospital for more than three weeks and died shortly afterward. In another case a man died after eating several pounds of paint chips over the course of several days. Bullying by some of the guards is routine, and paperwork related to prisoner complaints frequently gets lost.

Haney said there’s no question that Johnson County has more problems in its jail than surrounding counties. “In my opinion, I think the Johnson County jail needs some serious scrutiny. I think how they operate needs to be evaluated. You’re got to remember that for every time someone like Patsy Keifer is willing to stand up and make a public outcry, there might be 100 others who have been treated just as badly there but haven’t her courage.” The attorney said he gets as many calls from people alleging civil rights violations in tiny Johnson County as he does from Dallas County. “And Dallas has nearly 10 times the number of jail inmates as Johnson. So yes, something needs to be done about how they operate that jail and how they operate their whole criminal justice system. And unfortunately, they don’t seem committed to doing that, so cases like Keifer’s and jail hangings are likely to continue.”

No Johnson County officials other than Alford responded to calls for comment on the Keifer settlement.
“It’s been a long road,” Keifer said, “and I’m glad I’ve finally come to the end of it.”