Two things have changed about the little Italian eatery in Richland Hills formerly known as Café di Roma: the name and the floor. 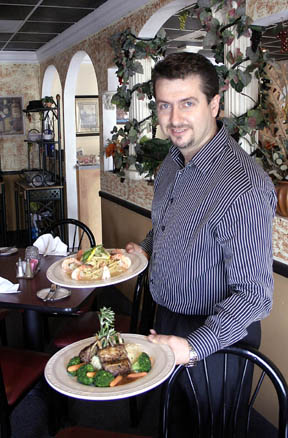 The establishment became Jerry’s Italian Bistro after it was brought to their attention that there was another place called Café di Roma, in Dallas. (When asked if the other Café had threatened legal action, the server just smiled discreetly and said, “Not really, but we had to change it.”) Owner Jerry Tairi had been up until the wee morning hours supervising installation of a gorgeous new tile floor in the restaurant entrance, sort of a lustrous, tan-colored, Greco-Roman temple mosaic design to match the columns coiled with fake grapevines and the paintings and photos of Italian landmarks that abound.

For the most part, though, the menu has stayed the same, a top-notch mix of pasta, chicken, seafood, veal, and pizza, all with homemade sauces. During a recent visit, there wasn’t a disappointing bite. The meal began with an intriguing soup called staciatela alaromana, perhaps better known to non-Italian speakers as “spinach egg-drop soup”: a golden yolk plunked into boiling chicken broth with shreds of fresh spinach. It was delicious, but be warned: Don’t linger over the bowl. Once the soup starts to cool, the crumbly egg pieces, green leaves, and broth begin to separate, and the flavor diminishes. The chicken rossini was two thinly sliced, baked chicken breasts topped with a thick tomato slice and a gooey roof of nutty mozzarella, all on a bed of steaming spaghetti. All of that labor cutting up the chicken and mixing it with the pasta was well worth it.

Two dishes came with that mouth-watering North Italian concoction known as “pink sauce”: a thick mixture of red marina and white Alfredo. Rigatoni alla vodka added a splash of Russian spirits that was admittedly hard to detect as anything more than a tiny extra zing in the dressing. It was the sautéed onions that made the real difference with the tubular pasta.
The other pink dish was even better. In tortellini Michelangelo, the little cheese-stuffed pasta cushions were sautéed with slippery shards of mushroom, tomato chunks, and sizable pieces of artichoke hearts. The mushrooms and artichoke melded wonderfully with the pink sauce. The title “Jerry’s Italian Bistro” may be new, but judging by the surprisingly large crowd – mostly families and senior couples – on a recent weekday mid-afternoon visit, longtime Richland Hills patrons won’t let a little thing like a sign change keep them away.