I wrote the headline on this story because I’m helpless in the face of an easy pun, but seriously, Simon Pegg isn’t fat. 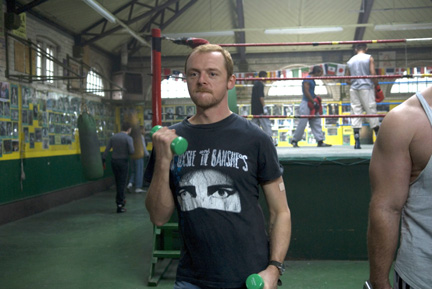 If you’ve seen him starring in some of the funniest British movies of the new century, you know that his physique is, at worst, slightly out of shape. Yet he’s portraying the “fat boy” referred to in the title of the new comedy Run, Fat Boy, Run. That’s odd, especially when you consider that Pegg’s frequent on-screen sidekick is Nick Frost, an actor with a much better claim to fatness. Then again, if that’s the biggest distraction from the story, then the movie must not be too bad. That proves to be the case for this pleasant, mild British comedy.

Pegg plays Dennis Doyle, whom we first see running away from his wedding in a blind panic, leaving his pregnant fiancée Libby (Thandie Newton) in tears at the altar. Five years later, his transition to loserdom looks complete. He has eternal trouble paying the rent on his basement apartment and works as a security guard at a London clothes shop, where he can’t chase down a drag queen in heels who shoplifts from the place.

He needs a kick in the ass and gets one when he finds out that Libby is seeing a handsome, rich, smugly responsible new boyfriend named Whit (Hank Azaria), who buys expensive presents for Dennis and Libby’s son, Jake (Matthew Fenton), and runs marathons for charity. Determined to win back Libby’s love, or at least her respect, Dennis resolves to enter and finish a marathon alongside Whit in three weeks. His decision is met with disbelief and laughter from everyone who knows him as a hard-drinking chain-smoker who never finishes anything he starts.

This was supposed to be an American movie, but the filmmakers could find financing only in Britain, and they had to turn most of the characters British to satisfy their backers. The movie is directed by former Friends star David Schwimmer, from an original DELETE by Michael Ian Black, a member of the comedy troupe known variously as Stella or The State. Pegg receives credit as co-writer – presumably he did the job of transplanting the story from America to Britain.
These American collaborators give the movie a much different tone from Shaun of the Dead and Hot Fuzz, Pegg’s uproarious films with Edgar Wright. Run, Fat Boy, Run is much softer, more romantic, and more conventional – the flashback montage of Dennis and Libby first falling in love is something that Wright would have mercilessly parodied. Yet it’s carried off lightly and with some skill by Schwimmer, directing his first feature. He makes one serious misstep late in the film with an overly literal hallucination about a runner “hitting the wall.” Other than that, he does a fair job of moving the story along at a leisurely clip without steering it into any dead spots.

That’s an accomplishment, given that the material isn’t that distinctive, by and large. The training montages, showing Dennis trying to skip rope and lift five-pound weights and drink raw eggs Rocky Balboa-style, only raise a few chuckles, because they aren’t far enough from the clichés that they’re referencing. Some unlikely coaches emerge to help Dennis with his regimen: his portly landlord (Harish Patel) and his best mate Gordon (Dylan Moran), who has wagered a ton of money with his unseemly poker buddies that Dennis will finish the race. Well played as they are, these characters don’t add much, though Gordon fires off a nice line to Libby about Whit. “It’s like you ordered him out of a catalog. … I once ordered some shoes out of a catalog. Italian leather. I took them out of the box, and they looked gorgeous. Then I put them on, and they hurt like hell.”

The film has enough lines like that – and a few other funny moments – to keep it from being forgettable. Pegg gives a terrific reading of Dennis’ speech to Libby, revealing the feelings of inadequacy that drove him to run from their wedding. (“I thought that spoiling your day would be better than ruining your life.”) Like quite a few funny men before him, Pegg proves himself to be a fine dramatic actor in this scene. Even better is a hysterical, extended slapfight between Dennis and Gordon that makes creative use of pianos, trashcans, and other props to hand. Schwimmer has always been a deft slapstick comedian in front of the camera, and he shows the same light touch behind it.

That scene is the only instance of this movie approaching the laughs kicked up by Shaun of the Dead, which exploited Pegg’s slacker persona to greater effect. For people like me who’ve been following his career, Run, Fat Boy, Run might seem watered down. On the other hand, newcomers to this actor might find it to be just their cup of tea. Soon you’ll be seeing Pegg in much higher-profile Hollywood projects, and this agreeable film will let you say you knew him when he was a fat boy.