Home News Metro Inner Universe
SHARE
Facebook
Twitter
God particles and dark matter may sound more like topics for theological debate than terms of science, but they’re both part of a global collaboration in physics research in which the University of Texas at Arlington is playing a key role. 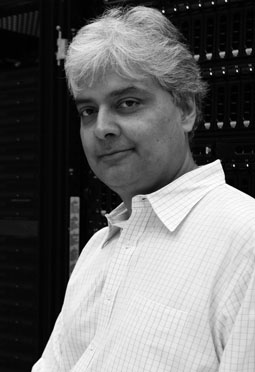 The 15-year effort will culminate over the next few months in France and Switzerland, when the world’s largest particle collider goes into operation. Like the superconducting supercollider planned – and then abandoned for lack of federal funding – near Waxahachie 15 years ago, the project in Europe is a huge circular tunnel, more than five miles in diameter. When it’s turned on, probably in late summer, atomic particles will be sent racing through the underground chamber at nearly the speed of light, so that scientists can study what happens when the particles collide. Thousands of scientists from 37 countries are involved in the project, including a United States team with members from universities and labs across the country.

Four devices called particle detectors, placed along the tunnel, will act like giant cameras, gathering data about the collisions. The largest of the four, known as the ATLAS detector, was built mostly by a group at UTA. After years of intense involvement in the device’s planning and construction, professors from the Arlington campus are heading up computer operations for the U.S. team and helping design the computer network and software that will allow scientists around the world to share the enormous amounts of data.

UTA physics professor Kaushik De has been working on ATLAS for its duration. “It’s hard to explain to someone when you work on a project for 14 years – [the emotion] is building up and building up,” he said. “So it’s really getting quite hectic and exciting.” He originally moved to Texas from Michigan to work on the Superconducting Super Collider, the North Texas project that was scrapped in 1993, after landowners across a swath of farms and small towns had been forced to sell their land for it.  The ATLAS device, roughly seven stories high and housing a cavern as big as a football field, is made of layers of steel and plastic, in 128 pie-slice-shaped pieces, each weighing about half a ton, that are fitted together with crucial precision. UTA’s portion of the construction process took from 1998 to 2002. The entire project – ATLAS and the other three particle detectors, plus the tunnel itself and the related computer operations – are known as the Large Hadron Collider, named for a type of proton to be used in the project. It’s located at the European Organization for Nuclear Research, known as CERN, straddling the French-Swiss border.

The theories that the collider is designed to test are so complex that they may sound like science fiction to many of us: the makeup of dark matter, the properties of anti-matter, re-creation of conditions after the Big Bang, and the existence of the Higgs particle – nicknamed the “God particle – which scientists have theorized about for 40 years but never yet proven to exist. (De says that the Higgs particles are “the only explanation for mass in the universe” – which, of course, makes everything clear as mud.) The collider should result in splitting apart what are now the smallest known particles so that scientists can see what’s inside.

De’s area of research with the ATLAS particle detector is on what’s called dark matter – the theory that all basic subatomic particles have “shadow particles.” The idea is also called super-symmetry. “Supersymmetry is an elegant theory,” said De, who is coordinator of computer operations for the U.S. team. “No supersymmetric particles have been found so far. I have been searching for them for 20 years! I hope we find them in ATLAS.” Inside the particle collider, built about 500 feet below ground, massive magnets accelerate and guide the path of the hadrons and other subatomic particles in an effort to force collisions. The superconducting magnets are in the process of being cooled down to a temperature almost as cold as deep space – minus 271 degrees Celsius. James Gillies, CERN’s chief spokesman, said the required cooling process should be finished later this month.

Once the collider is turned on and the particles are sent racing around the tunnel, the four particle detectors will reconstruct and record the particle collisions. De is also in charge of organizing which portions of the global computer network will work on the ATLAS data at various times, since the information will be coming in 24 hours a day. He said about 2,200 people from 37 countries are working on the ATLAS detector alone. UTA collaborated with four other American universities on the ATLAS detector. The process of building ATLAS involved the extremely precise manufacturing of steel plates, which were then glued together “like a sandwich” by a robotic glue machine, De said, and painted with equal precision. Once the stacked-steel segments had been created, half were shipped to Argonne National Lab and half to Barcelona, where pieces of plastic were inserted between the steel layers. When particles are forced through the steel layers, the plastic – the same type that soda bottles are made of – gives off light created by the particles’ energy. The “tracks” left behind by the particles in their path through the conductor are the basis of the data recorded for analysis.

After construction of ATLAS, De began to work on the computer side of the project, designing the “Grid,” a network of tens of thousands of computers that will allow scientists around the world to simultaneously work with the enormous amounts of data produced by the project.  “I completely switched from the construction project to the information technology,” De said. With a scientist at Brookhaven National Laboratory in New York, he is also developing the software program, called PanDA, to be used by all ATLAS collaborators.

The amounts of information to be transmitted are almost beyond comprehension, compared to the average PC on the internet. For instance, Gillies said, 15 petabytes of information are expected the first year from the larger experiments. A petabyte is equal to more than a million gigabytes. Jaehoon Yu, an associate physics professor at UTA, described the Grid as having an unlimited capacity with enormous growth potential. He will be at CERN for most of the summer analyzing data. His part of the research involves analyzing the actions of particles called photons. He said the earliest results of the analyses aren’t expected until late 2009 or early 2010.

About 10,000 people are working on the project, Gillies said, and total investment in the collider is about $10 billion, provided by governments of the various countries involved. Funding for the ATLAS part of the project came from the Department of Energy and the National Science Foundation. The new collider is expected to produce about seven times more energy for accelerating particles than the largest collider now operating, called the Tevatron, in Illinois. “This means that things inaccessible to the Tevatron will become accessible” to the Large Hadron Collider, Gillies said.
The collider, De said, is an attempt to find out what the universe is made of, “and how it works.”