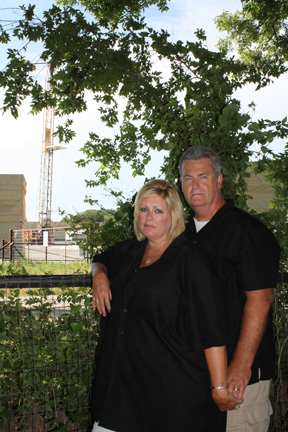 But four months later, when Devon Energy put up a gas drilling rig site a scant 213 feet from their house, their paradise quickly morphed into hell. “We were living in a condo in southern California, and the stress from my work and the general congestion there was getting me down,” Annette Daniel, 49, said. “So my husband Mike suggested we move out here. He had been born in Dallas, so he had roots here.”

The Daniels looked at dozens of properties before choosing the house on five acres in Reata Estates. “It was so perfect, with a pool and an outdoor jacuzzi, room for horses that I always wanted … . At night we’d look past the fence to the rolling hills of our neighbor’s pasture and the deer grazing there. “And then wham! One day … Devon starts bringing in trucks and laying [the foundation] for a drill pad. And there went everything.”

It’s a story being played out in homes across the Barnett Shale, where the boom is a boon to blue-collar workers, gas field-related companies, and property owners who lease their mineral rights, but a bust for those who find themselves at the mercy of the gas crews. “We couldn’t use our pool or jacuzzi because the first thing the drilling company did was prune the trees along our fence line on the access road so their trucks could come in,” Annette said. “Instead of privacy, we had 50 hardhats looking at us.”

Nights, the lights from the drilling rig flashed directly into their bedroom, she said, forcing them to put up additional blinds. But sleep was hard to come by anyway because of the noise. And things weren’t much better in the morning. “I sat and counted 70 trucks coming onto that site one day. And they tell me it will get worse once the fraccing starts. You can’t even breathe the air here some days for all the diesel and dust they churn up.” It gets worse. The drill pad, which takes up between 2.5 and 3 acres, sits above the Daniels’ property, and each storm has brought runoff and stones from the drill pad onto their lot.

The couple called Devon and spoke with the foreman on the site several times about the lights and noise. “They suggested that they’d move us to a hotel for a few weeks, until things quieted down some, but that was out of the question, partly because of our horses and donkeys, but also because we run our media consulting business out of our home,” Annette said.

While the Daniels knew nothing about the Barnett Shale before they moved to Texas, their neighbor, Steve Knapp, did. He grew up in Fort Worth, and the Devon rig sits on his property, but he still didn’t like it.  “One day about six months ago I was outside on my day off and this fellow drove up and asked if I was Mr. Reese. I told him I wasn’t, and he said it didn’t matter – I was next on the list,” Knapp said. ” ‘For what?’ I asked. ‘An oil well,’ he said.”

Knapp, 49, asked the man where he thought he was going to put it, and he pointed down the hill toward the property line. “I told him he was crazy and that he was certainly not going to be putting an oil well on my property. I was wrong, of course.” Two months later a team came out and planted stakes on Knapp’s place just behind the Daniels’ fence. Knapp took them out and put up a locked fence. When the men returned they cut the locks and began laying the rig pad. “I knew when I bought this place I didn’t have any mineral rights,” Knapp, a veterinarian, said. “So I knew this might happen but was hoping it wouldn’t. But even if it did, I never imagined they could take nearly three acres and pay me nothing but surface damage rights.”

Knapp said his wife was hit hard by it. “She spent a lot of time crying, a lot of time angry. Now, she just wishes they’d finish what they started and let us get on with our lives.” What he doesn’t want is another pad. “I bought the property with the idea of putting cattle on it, and I’ve got several head coming in a few days. Well, they’re going to need barns, so let’s say I’m putting the barns in strategic locations that hopefully will prevent Devon from being able to get closer than 200 feet – the limit out here – to any structure. Of course, if they want to, well, I guess they’ll find a way to do what they want.”

In Azle itself, the setback requirements are similar to those in Fort Worth: A well may not be closer than 600 feet to a structure, and there are also landscaping and street maintenance requirements. But since Reata Estates is outside the city limits, only the Texas Railroad Commission’s minimal rules apply, which allow wells as close as 200 feet to residential structures.

“My perspective is a little different than my wife’s,” said 56-year-old Mike Daniel, a towering bear of a man. “For me, the idea of moving from Southern California was to give my wife her dream home. Our kids were grown and gone, and so this was a dream: five acres, horses, raising miniature donkeys, looking over our neighbors’ pastures at deer. But when this started, the dream went nuts. My wife went from being perfectly content – more than that, happy – to crying all the time. I was trying to give her a dream house, and I’ve given her this. If we had known there was even a chance of this happening, we wouldn’t have bought here.”

He is particularly upset that there are no regulations forcing real estate salespeople to disclose things like the possibility of a well 213 feet from your home. “There ought to be full disclosure. There ought to be regulations compelling a due-diligence investigation into this sort of thing. Unfortunately, there are none. And being from Southern California, we didn’t know to ask.”

Apart from the trauma of finding a rotten apple in her Eden, Annette, who has been studying the Barnett Shale, is concerned about the possibility of accidents. “There have been gas explosions that have left craters several hundred feet wide. And if there’s one here, well, our house is going to be in the middle of that crater.”  For a few days at the end of May, things quieted down. The big rig had done its job and was removed. “We finally got to use our pool for the first time,” she said. But a smaller rig was put up just days later. A Devon spokesman said the company will drill multiple wells at the site – and fraccing will start in a couple of weeks.

On top of everything else, Annette said, she worries about what will happen due to the changes in runoff patterns caused by the drill pad. “I don’t know how bad it’s going to get, but I know it’s going to get bad,” she said. “They’re out there changing the floodplain, replacing nearly three acres of absorbing soil and grass with nearly three acres of stone and gravel.” Devon Energy representative Chip Minty said he couldn’t discuss specifics of the well site affecting the Daniels and the Knapps. But in a written statement, he noted that: “Being a good neighbor is one of Devon’s corporate values, and the relationships we share with the surface owners we work with are important to us. To maintain those relationships, we make it a priority to work with owners to restore their property.

“When the drilling and completion activity is finished and the well is producing, Devon levels the area and makes any necessary repairs to roads, fencing, or other features that have been affected … . We work with surface owners before we begin the project to determine their reseeding and planting preferences and include those in the agreement that is signed before work begins.” Hogwash, said Knapp, who has never been offered a written agreement of any kind from Devon. “The only thing they told me was that in 60 or 70 years, when the wells go dry, they’ll clean it up. But they never consulted me about anything and refused to give me or my lawyer anything on paper. So they can say what they want, but that’s not what happened here.”

The Daniels’ house sits near the end of a cul de sac in a wonderfully bucolic section of southeast Parker County. The previous owners landscaped the property beautifully, with trees and bushes offering shade from the broiling Texas sun. From the front, the home, with its stone façade, really does look like a dream house. But once you step into the back yard, it’s difficult to ignore the tall wall of brown-wrapped sound-muffling material that runs for a couple of hundred feet along the Daniels’ property about 30 feet from their rear fence line. And it’s impossible to miss the huge drilling rig itself. Despite the sound barrier, the noise of machinery and trucks was constant on a recent visit.

“You know,” Annette Daniel said, “we moved here to eliminate stress from my life. And now I’ve got no quiet, no privacy, no more view of the pastureland or the deer. My dogs sometimes get so upset with the noise that they defecate in their own crates, something they’ve never done.” On one occasion, she said, when she was working her horse in the pen, he got so spooked by a driver gunning his truck down the access road that he almost trampled her. “We have a little bird sanctuary in our back yard, and it was filled with all sorts of birds. But since the drilling site came in, they’ve nearly all disappeared.

“Our house is not our life,” she said. “But we worked really hard to be able to get to a point where we could purchase a piece of property like this. I can’t even explain how it makes you feel to go through this. From peace and quiet to the invasion of a monster and all these people coming in and devastating the area. This is something you imagine happens in Third World countries, not here.”