It may come as a jolt to some people, but Ballet Concerto, the performing wing of the Margo Dean Dance Studio, celebrates its 40th anniversary this week, with performances Thursday through Sunday in Trinity Park.

After founding the Fort Worth Ballet, the ancestor of Texas Ballet Theater, in 1961, Dean gave up affiliation early on. “I didn’t start the company for me,” she said recently. “I thought the city needed a dance company.” 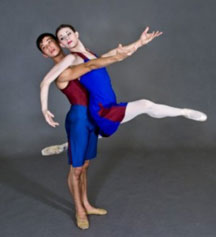 Instead she focused on her own Ballet Concerto, with its unique outdoor summer programs, in addition to an annual Christmas outing in Will Rogers Memorial Auditorium. The beginnings were pretty primitive, Dean said, with the dancers performing on a flat bed truck, donated by the city, on the lawn of what is now the Modern Art Museum of Fort Worth. Fast forward to 2009, and the company enjoys a suitable platform and lighting in Trinity Park.

This week’s programs will include a new work by guest choreographer Bruce Marks, onetime principal dancer with American Ballet Theater and former artistic director of the Boston Ballet. The piece, Straight From the Heart, is set to cabaret style music. Another guest choreographer, Luis Montero, will restage his popular Bolero and his Carmen pas de deux to be danced by Michelle Gifford and Brandon Nguyen. Resident choreographer Christine Hay will revive her bouncy, New Orleans-jazz-influenced Let the Good Times Roll, and the programs will open with a brief piece by Elise Lavallee for the students called It’s Too Darn Hot.

Dean, who opened her studio in 1949, has been a pillar of the Fort Worth dance community for 60 years. And always will be.