Among Australian rock ‘n’ rollers, Mick Medew is a name to conjure with. Starting in 1981, he fronted the Screaming Tribesmen, a band that hit big Down Under and even got a shot at U.S. MTV with 1987’s Bones and Flowers – big hair, pointy guitars, and all. Now Medew’s got a new band with a couple of ex-Tribesmen, playing pubs instead of arenas but bringing a sound so saturated with unhyphenated rock (not metal, punk, or grunge) that it seems like a throwback.

Their debut disc, All Your Love, is a half-hour packed with big, crunchy guitars, a roiling rhythm se 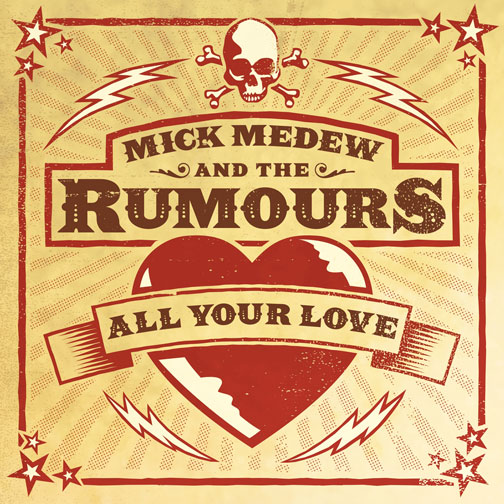 ction, and riff-driven, hook-laden songwriting. Cue up any track, and you’ll find yourself swimming in layer upon layer of immense-sounding guitars that dominate the mix like they’re supposed to. Medew and his foil, Ash Geary, can really play, and they like to show you how. They’re flashy and fiery, but in a way that’s always roots-referential (think Chuck Berry filtered through Keef Richards and the Stooges’ James Williamson), never crossing over into showboating wankery.

From its telegraphic intro, opener “Spinning Wheel” is a mid-tempo pounder with lots of nifty arrangement touches that give the band a chance to flaunt its tightness. “Ready To Fall” has a stop-start riff and singalong chorus that recall another Aussie band, the one with the duckwalking guy in the shorts. “Overdo Everything” is a paean to excess that neatly introduces “Another Girl Another Planet,” their take on the Rumours’ tune by the Britpunk fellow travelers the Only Ones. “Mary Jane” rides out on a tide of ringing arpeggios and cracking snare-shots. Overall, this is the kind of Big Rock Record that I didn’t think they made anymore, packed with fistfuls of guitars and melody.