If variety is the spice of life, then I’m-a one spicy a-meat-a-ball. Lately anyways. And as it only applies to the places where I drink. Don’t get me wrong. The bars on West 7th are great, I dig West Berry, I left my heart in Mad-nolia Av, ah luv the Stockyards, and there are even a few places downtown where I feel comfortable without a rape whistle. But after being stricken with a crippling sense of ennui recently, I gathered a few of my fellow elite area drunks, and we discussed some new dingy, off-the-beaten-path bar options.

It was sort of like that scene from the first Lord of the Rings movie in which all of the good guys meet to discuss how to destroy the ring. Instead of sending someone off to throw a piece of jewelry into the fiery pits of Mordor, we decided to go drinking on Jacksboro Highway. Prithee, a dive-quest. 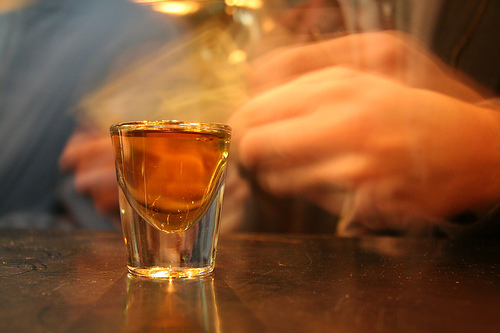 It was a Monday night around midnight when we set out, and the first few places we went were either closed or closing. Apparently, Jacksborians, like most of the people in this city, have better things to do on Monday nights than hang out at bars. After our third strike, we almost turned back. It was a lot like that scene in LOTR in which Merry stops at the edge of the Shire because he’s never been that far away from home. But we pressed forward and found ourselves at Eight Balls Billiards and Bar. To be honest, the city-boy that I am, I was half expecting to be stabbed upon entrance, as I am at every bar on Jacksboro. But, to my pleasant surprise, the crowd was small and friendly, and the bartender oozed charm from every pore.

The place itself was pretty standard issue: a couple of pool tables, a jukebox, bar tables and stools, and a giant tub of beer on ice. One of my favorite things to do at bars like Eight-Balls is to play only girl-pop songs on the juke. It tends to lighten the mood, and it almost always unites the bar against me. But my playlist went over without as much as a whimper of protest. In fact, our middle-aged bartender seemed to know all of the songs. I guess that explains why they were on the jukebox in the first place along with “Cheesy” Kenny Chesney and Toby “I’ll Kick You in the Teeth” Keith.

After a stern “you boys be careful” from the friendly bartender, we headed about two blocks away to Cowtown Texas Saloon, confident that we were most likely not gonna get stabbed. Cowtown looked like it was ripped out of the Stockyards. The wood floors, kitschy signage, old Polaroid pictures of regular customers underneath the glass table tops, dead animal heads on the wall, an open dance floor, and saddles strewn about the place gave me great hope for a rowdy evening. The bartender, however, had other plans.

There were four of us, all in our late 20s to (very) early 30s, and the bartender scrutinized our I.D.s for what seemed like an eternity and then came to the conclusion that we were all under age and that our driver’s licenses were fakes. Now, I understand that most folks who drink on Jacksboro are a little older (college-aged students prefer meat markets, not friendly dives), but come on. After some light-hearted taunting, her mood turned from cold to vicious. She eventually served us but with all of the charm of a prison guard giving death row inmates their breakfast.

We ordered a round of whiskey to toast our night and were poured one-ounce shots. For folks who don’t know, a normal shot is at least two ounces. So when we protested, she invited us to go to another bar and try their shots. Were it not nearly last call, that’s precisely what we would have done. There were only two other people in the bar, one of whom was an endearing gent wearing a starched shirt and huge cowboy hat who kept us entertained with jokes that he clearly had no recent occasion to tell. He smelled new blood, and we ate it up.

But the barmaid pretty much ruined the Cowtown for us. We still tipped her OK, on principle. But she could have made a mint on us that night. Four young, hard-partying but mellow guys — most of whom have worked in bars and restaurants — is not a demographic that you’d want to scare away. Or so you’d think.

I thought about that night for a while and decided to go back on my own but this time during happy hour. The vibe was a little brighter. There were a couple of people playing pool, and a few folks sitting at the bar, laughing intermittently. There was a much more pleasant bartender on duty. I was carded, of course, and she made a joke about how old I am compared to how young I look. (I exfoliate.) I chatted her up a little and struck up another great conversation with some of the other folks at the bar. I was amazed at how differently I perceived that place on my second visit. It delivered on all of the promise that I thought it had the first time around. I also found it remarkable how one miserable person can make such a huge impact on a bar experience. I guess I’ve always been spoiled by the professionalism of the barkeeps at my usual haunts (The Chat Room, Lola’s-Sixth, The Moon, Malone’s). And I’ll go back to Cowtown Texas Saloon — just not on Monday nights. — Eric Griffey