This is a plea to a certain television network to stop running all those “Do You Have the Travel Bug?” commercials. Having seen the ads a million times now, Chow, Baby is convinced it is seriously afflicted with this ailment, comorbid with eczema, atypical depression, and acute male-enhancement deficiency. (This is what happens when you misplace the TiVo remote and have to sit through commercials like a common person.)


And Chow, Baby’s Travel Bug symptoms – passion for new adventures, amorous feelings toward locals, insatiable appetite for new foods – only worsened after several days of Travel Channel’s recommended treatment: Lie on the couch and watch lots of Travel Channel. (The depression symptoms got worse, too.) Off to the most exotic, interesting, strange-foods place Chow, Baby knows: South Arlington. 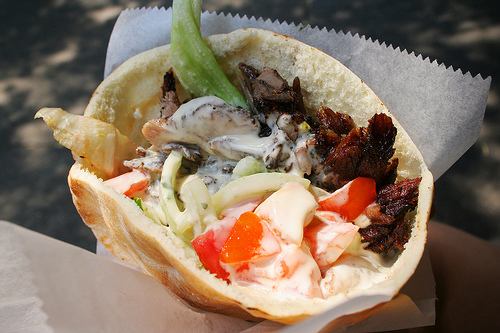 After just a few seconds amid the intricately patterned rugs, bucolic paintings, and lute-y flute-y folk music at Istanbul Grill (6204 S. Cooper St.), voilà, you’re in southern Turkey. Of course the place is staffed with handsome young Turks, and pardon Chow, Baby for being globally stereotypical, but Turks are up there with Panamanians when it comes to charm and warmth and “you are special” prolonged eye contact. Amorous feelings? Check. Strange food? Not if you’re up on your Mediterranean and Middle Eastern cuisine – just better, in many instances. The Turkish version of gyros and shawarma is doner kebab, marinated lamb and beef stacked on a spit and roasted until the edges are crispy. You can get it in a pita ($4.95) for on-the-go practicality, though it’s even better in a plate ($9) where the juices can run into the rice. Top it off with yogurt-cucumber cacik, which is the same as Greek tzatziki but somehow much tastier.

As always, indecisive Chow, Baby found itself thanking, in this case, Allah for creating the combo plate. On the appetizer combo ($11), some familiar Middle Eastern treats – hummus, baba ghannouj, tabouli; all extraordinarily tasty  – and some new foods, like a knock-me-over char-grilled eggplant spread. The mixed-grill platter ($16) is a char-grilled feast of chicken kabob, lamb kofta, shish kebab, and more; not-too-strange dishes, perhaps, but made exotic with traditional Turkish marinades and spices. Together, these combos would revitalize at least two, maybe three hungry travelers. If you’ve got the Travel Bug, forget the couch; Istanbul Grill is the best medicine.

Palms Café & Grill (2400 W. Pioneer Pkwy.) also cured Chow, Baby’s travel bug, albeit with a more homeopathic approach: dosing the patient with preparations diluted until no original molecules remained. Here, the best part of the usual-stuff combo appetizer plate ($7.95) was having it taken away. Chow, Baby was fascinated by its shawarma combo: mushy beef with a strange (not in a good way) aftertaste and cardboard-dry chicken with no taste at all, polar opposites that were equally repelling ($18.95 for two, but you can have Chow, Baby’s half). It wasn’t until Chow, Baby saw the very long tobacco menu that it realized its expedition error: Palms is primarily a hookah lounge, and in that category it’s a winner, with loll-able couches, silky stuff wafting from the ceilings, and quick-on-the-pipe-refill servers. Not the adventure Chow, Baby and its bug were seeking, but that’s OK: Lots of exotic places to visit await, as soon as we find the remote.