There’s a part in the 2004 Disney/Pixar hit The Incredibles when super-human boy-speedster Dash catches himself accidentally running on water. As any 10-year-old would, he cackles with genuine glee. This is long after he has already used his powers to prank his teacher, squabble with his sister, and run up and down a bunch of palm trees.


There’s a decidedly different reaction from the titular character of Astro Boy when he has a similar epiphany and discovers that he’s actually an android who can fly. He barely registers surprise. 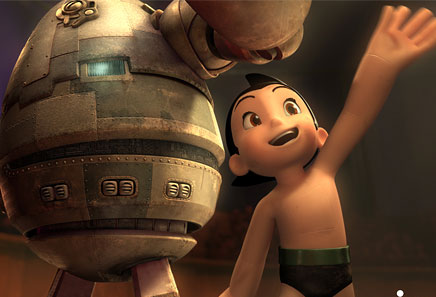 A yawn is perhaps the appropriate response to this new movie from Hong Kong-based Imagi Animation Studios. What should be a breezy, enjoyable family adventure is a series of expositions, toothless gags, and lackluster visuals pulled along by direction that alternates between bored and weary. Astro Boy is like Star Wars as envisioned by the producers of Barney and Friends.

Based upon Osamu Tezuka’s classic manga work, Astro Boy is the big-screen animated debut of the beloved character (voiced by The Spiderwick Chronicles‘ Freddie Highmore), a sophisticated robot boy built by Metropolis City’s minister of science, Dr. Tenma (voiced by Nicolas Cage), to replace his dead son. Cage’s general lack of enthusiasm is at an all-time low here, and you can hardly blame him. Writer/director David Bowers gives the actor very little to do beyond mourn his lost son and despair over his imperfect replacement. In fact, if Bowers has a forte, it seems to be dampening excitement. Whether Astro Boy is goofing off with his friends, blasting aerial acrobatics around incompetent hovercar-riding cops, or slamming girders into a building-sized robot baddie, everybody remains pretty blasé.

The plot centers on Astro Boy’s search for acceptance. Tenma, upon realizing he can never truly replace his lost son, banishes “Toby,” as he’s called, from the pristine, robot-assisted airborne metropolis to the Earth’s surface, which is covered in piles of junk and discarded robots. Toby falls in with some misfit kids who don’t know he’s a robot, and then he ends up with some misfit robots who are trying to revolt against human oppression. (The robots in Astro Boy are supposed to do our bidding a la I, Robot, no questions asked.) Since one robot is stupid and another is named Mike the Fridge (because he’s a ‘fridge), the setup is supposed to be comic relief. Really, it’s just another fun-free way to show that Astro Boy doesn’t fit in anywhere.

The ragtag bunch wanders around the junk pile, acquiring parts on behalf of a surrogate father figure, a banished robot inventor named Hamegg (voiced by Nathan Lane). He seems like a nice guy until Toby, now known as Astro, is forced to fight Hamegg’s rebuilt droids in a gladiatorial arena, which Astro promptly dismantles in the name of robot rights and feelings. Looming above all this is the warmongering President Stone (Donald Sutherland), who needs Astro Boy’s battery to power a sophisticated killing machine. Ultimately, robots bash one another, Tenma has a totally unbelievable change of heart, and the kids on Earth and in Metropolis City learn that robots have feelings, too.

For all of Astro Boy‘s whiz-bang action and robotic gadgetry, though, the only piece of technology you’ll be interested while you sit through this is your watch.