Mike Matthews nailed a line drive into right center field and made it to second base. His teammate followed that with a high fly to center, which the fielder caught for an out. When Matthews tagged up and raced for third, the center fielder hummed the ball to the shortstop, who fired it directly at Matthews. The ball missed him and rolled into the street, and the 27-year-old massage therapist headed to home plate.


Whoa. How could a baseman get away with throwing directly at a base runner? That’s as easy as Matthews’ score: The game being played last Sunday at the Jo Kelly School diamond on Fort Worth’s West Side wasn’t baseball. It was kickball, the latest craze among Gen Y’ers who want to get out and do something more active than video games but not as, you know, athletic, as baseball – and that also brings them into social contact with a bunch of members of the opposite sex. 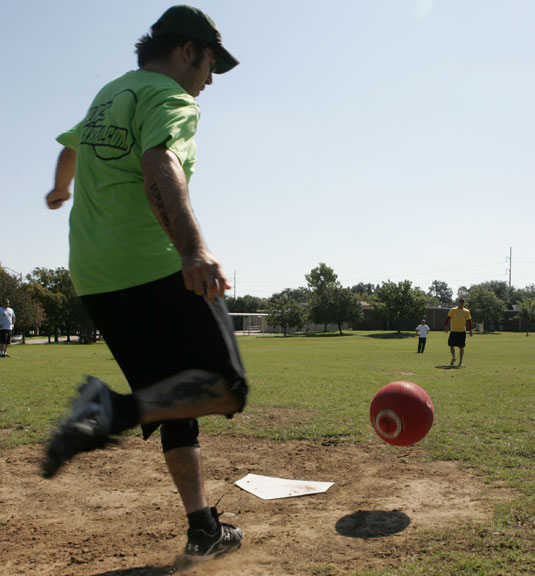 The twenty- and thirtysomethings practicing at Jo Kelly might have played a version of kickball when they were in elementary school – a game similar to baseball except that the pitcher rolls a soccer-sized ball toward home plate and the “batter” kicks it into the field and runs the bases. Oh, and a baseman can put out a runner by hitting him directly with the ball. Each team fields 11 players, (baseball has nine), strikes and balls are called, catching a fly ball before it hits the ground is an out, and grounders are thrown to first base to beat the runner.

Four young men sitting in a bar one night came up with the basics of the sport. They made other changes from baseball or kiddie kickball. Games last for five innings instead of nine, or about 45 minutes on average. An even more important change: National adult kickball rules require that each team field at least four men and at least four women. The result is that men and women get to know one another on the team and then, thanks to the relatively brief game, have plenty of time left over to socialize further in their local bar.

There are now three kickball leagues in Tarrant County (two in Fort Worth, one in Arlington, with a total of about 600 players) and nine in the Dallas area. According to the World Adult Kickball Association (WAKA), the national organizing body, there are now about 300 leagues across the country, with more than 60,000 registered players.

Meghan Scott, 27, an advertising saleswoman for the Fort Worth Star-Telegram, moved to Fort Worth from Minneapolis about four years ago. She had played kickball in the Twin Cities but couldn’t find a league here, so she signed up with a team in Dallas.

“I knew from my experience with kickball in Minnesota that it was a great way to meet a lot of people,” she said. “That’s a big reason why I play.”

Driving to Dallas every week quickly got old, however, so about two years ago she helped organize the local leagues in Fort Worth. She is now paid as a part-time employee of WAKA. The Westside league plays at Veterans Park in White Settlement, while the Eastside league calls Gateway Park home. In Arlington, the kickball games are at Vandergriff Park.

Adult-comedy team names are part of the action –  including “Pitching Without a Rubber” and “Suck My Kick” in Fort Worth and “We Got The Runs,” which plays in Arlington.

What makes the kickball phenomenon different from other recreational sports – besides the requirement of coed teams – is the affiliation with WAKA. In other sports, leagues are often organized by city recreation departments. The kickball teams pay their registration fees to WAKA, which then leases fields, organizes schedules, buys jerseys and even finds the bars to drink at after the games. (But not at the field – drinking isn’t allowed at city ballparks.)

Players pay between $60 and $70 to WAKA each season, and there are three 10-game seasons annually in most of the Texas leagues. If the 60,000 registered players around the country paid $120 a year (for two seasons), WAKA would bring in more than $7 million a year (an estimate, since WAKA, as a private company, doesn’t disclose financial information).

The Virginia-based WAKA has about 30 full-time employees working to grow the sport. One of them is Jasun Lee, 33, who is based in Fort Worth as WAKA’s customer service representative for the entire Central time zone. He oversees leagues in places like Chicago and Kansas City and also travels a lot to get leagues started in other places. (Oklahoma City is a current project.) “The players are very busy with their jobs and maybe don’t have the time or experience” to get all the things done needed to get a league organized, he said. 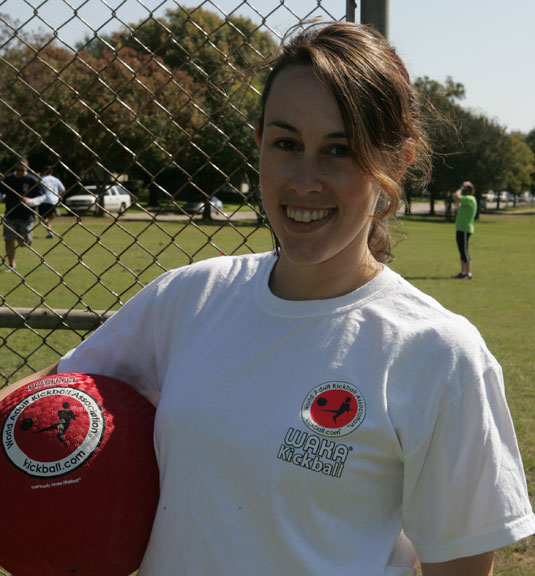 It’s not clear when kickball started as a sport. American World War II correspondent Ernie Pyle reported that U.S. soldiers were playing it in North Africa in 1942. But the origins of the current kickball craze are well documented. In 1998, four recent male college graduates were sitting in a Washington, D.C., bar trying to figure out a new way to meet people, especially women. “We were just looking for something to do,” said WAKA co-founder Johnny LeHane. “There were softball leagues sponsored by the companies where we worked, but we figured we saw those people all day long, so why socialize with them at night playing softball?

“No one is quite sure why kickball came up,” said LeHane, who was a programmer for AOL at the time. “It wasn’t really recognized as a sport. But the more we thought about it, the more it made sense. We all played it as kids, and we all remembered it as being fun. So we started out with a league in D.C.”

LeHane and the other founders eventually quit their day jobs to promote the kickball leagues. They honed the rules, adding that key requirement about players of both genders being on the field in each game. As a result, WAKA membership is about evenly split between men and women, LeHane said.

That mix has made kickball more reflective of recent sport and social trends. Young adults tended to socialize in mixed gender groups in high school and college years, rather than hanging out with same-sex friends and interacting with the opposite sex only through on-on-one dating. And more women have played sports in high school and college in recent decades than their mothers did, in large part because of the federal government’s Title IX rules governing college sports.

“There are as many women as there are men in the league, so sometimes we call it 45 minutes of kickball and three hours of socializing,” LeHane said. “We can definitely boast lots of kickball marriages and even a few dozen kickball babies out of this.”

Matthews said the social aspect of kickball is very important to him. He saw a WAKA ad in the Star-Telegram last year and decided to check it out.

“I remember playing in the fifth or sixth grade, and I remember it was a lot of fun,” Mathews said. “I fell in love with kickball all over again when I joined the league last year. It is a good way to stay in shape, and I am not much of an athlete. I’ve met a lot of interesting people and have made some very good friends.”

WAKA officials want to make kickball a widely recognized sport with a tournament to decide the national championship. The group sponsored a “Founders Cup” tournament in Las Vegas last month, and invited 75 teams (the teams pay their own expenses). A few of the Fort Worth teams were asked to compete, but scheduling conflicts made it impossible.

An event last month in Connecticut may be a sign that the social importance of the game is growing. The pop rock boy band Jonas Brothers played kickball in front of 5,000 screaming fans to raise money for charity.

“Kickball is popular because it is a very simple way to get out with friends and do something fun,” Meghan Scott said. “We can be very competitive, but all the players forget about that when we hit the bar after the game.”