It took a few years, but Dallas has finally caught up with Fort Worth and Houston and now has a world-class opera space, the Margo and Bill Winspear Opera House. The inaugural production was the Dallas Opera’s new take on Verdi’s Otello.


Surrounded by about an acre of white louvered panels that shade the exterior, the round, red-glass-covered, four-story building looks stiff and self-conscious during the day — perhaps because it’s the only splash of color in the area. But at night, the structure by the British firm Foster + Partners (run by Pritzker Prize winner Sir Norman Foster) glows luminously from within. The full name of the house appears in red neon letters, and the glass-enclosed lobby and staircases present a glamorous, inviting picture. 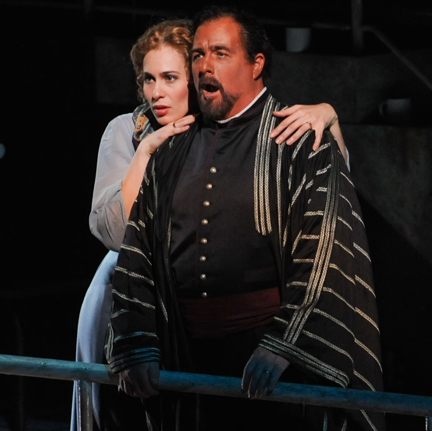 Comparisons with Fort Worth’s Bass Performance Hall seem inevitable. Inside, each building has the traditional horseshoe–shaped concert space and about the same seating capacity: 2,200 in Dallas and 2,050 in Fort Worth. The two buildings are also in the same league where it counts: acoustics and sight lines. And that’s about where the similarities end.

Outside, the Winspear’s look is decidedly contemporary, while the Bass’ appearance — replete with signature trumpeting angels — harkens back to the Beaux Arts era. In the auditorium, the Winspear sports an enormous central chandelier that retracts into the ceiling before performances and polished hardwood floors that extend all the way to the aisles. Conversely, the Bass’ aisles are carpeted, and there’s no technological wizardry on display.

Viewers seated flanking the orchestra get a better deal in Fort Worth. Bass Hall uses two rows of chairs that face the stage, which might reduce the seating capacity but is much more user-friendly. At the Winspear, each double row of stationary seats faces the opposite wall rather than the stage, which means some concertgoers must swivel sideways and lean forward to see the action onstage.

The Dallas Opera went all out for its debut, assembling a solid cast for Verdi’s heroic take on the Shakespeare play. Clifton Forbis was a robust-sounding Otello, his brilliant tenor easily soaring over the thick orchestration. Only when he tried to rein in his voice was he overwhelmed. The sinister Iago, one of theater’s great, slithery villains — a study in black-hearted conniving — was handsomely sung by Lado Ataneli. As Otello’s virtuous wife Desdemona, soprano Alexandra Deshorties sounded a bit lightweight for the role. I wish that she had extended the gentle pianissimo phrases of the “Willow Song” and the “Ave Maria” instead of letting them drop as she did.

My only real quibble, though, was with the production itself, which moves the story from 16th-century Venice and Cyprus to World War I. Contextually, that was OK, but it proved to be a downer visually. The idea worked too well. Set aboard a moored gray battleship — with the men in white uniforms and the women in mostly charcoal gray gowns with white aprons and caps — everything was bathed in shadow. There’s enough darkness in the characters and the music without adding more. The company did something similar a few seasons back with Fidelio, updating the proceedings from the late 1700s to communist-era East Europe and keeping everything dark and low-key, which worked well because the opera takes place in a prison. With Otello, the gray-washing seemed like overkill.

Music director Graeme Jenkins had his forces well in hand. The orchestra pit was extended to accommodate 75 musicians, and the sound was glorious. The most violent outbursts, particularly the opening storm, were full and clean, and the gentler sounds floated effortlessly through the house.

North Texans now can revel in two major musical venues. And there are smaller ones popping up here that also might warrant repeated visits. — Leonard Eureka

The Fort Worth Museum of Science and History offered a preview of its new digs on the southern edge of the Cultural District last week, coinciding with a conference sponsored by the Association of Science-Technology Centers, an organization of science centers and museums. Hundreds of scientists, special guests, and reporters came out to be wowed by the new building, the exhibits, and, ahem, the glories of urban gas drilling. No kidding.

First, the museum building, designed by the Mexican firm of Legorreta + Legorreta, is physically beautiful. The light-taupe stone exterior is decidedly Modernist: lots of right angles and other easily recognizable geometric forms, including domes, pyramids, and rectangles. The interior is open and not stuffy and encourages exploration. Unlike the museum’s previous home, the new building lives up to the architectural heritage of the Cultural District, home to some of the most renowned buildings in the world.

Inside is a fest of technical marvels. Most awesome among them is the planetarium. One of its myriad features is custom-designed computer programming that provides real-time renderings and flybys of the Earth, the solar system, our galaxy, and even the known universe. Pretty impressive.

Second, the exhibits aren’t as stodgily displayed as they used to be. Particularly notable is the full skeleton of the paluxysaurus, a 30-foot-long sauropod (reminiscent of a brachiosaurus) that grazed in cretaceous Texas. Even better, though, may be the huge, bad-ass stegosaurus-shaped slide in the monstrous gift shop.

Third, watching scientists and science-and-history people get loaded on fee Shiner and margaritas is hardly without comedic value.

Fourth, They Might Be Giants played. They were awesome.

Lastly — and most weirdly of all — conventioneers and press were shown a 3D movie about natural energy and, specifically, the history of the Barnett Shale formation. The screening was in real-D, too. The seats moved to correspond with particular kinetic movements and sounds onscreen, and, at one point, gadgets by the seats sprayed viewers with what was hopefully water to simulate submerging. The moral of the story: Urban gas drilling, contrary to pesky news reports from one particular local alt-weekly, is good. Natural gas bigwigs and companies with stakes in Barnett Shale drilling funded some of the museum’s $75-million makeover. (Or takeover. Whatever you wanna call it.)

The museum will open officially on Fri., Nov. 20. — Cole Williams with Anthony Mariani