Since coaxing their trumpeter-father Dennis Gonzalez out of musical retirement a decade ago and forming Yells at Eels, brothers Aaron (bass) and Stefan Gonzalez (drums) have been performing ever more impressively. (YAE’s full creative brilliance has finally been captured on disc, on Ayler Records’ The Great Bydgoszcz Concert, released earlier this year.) 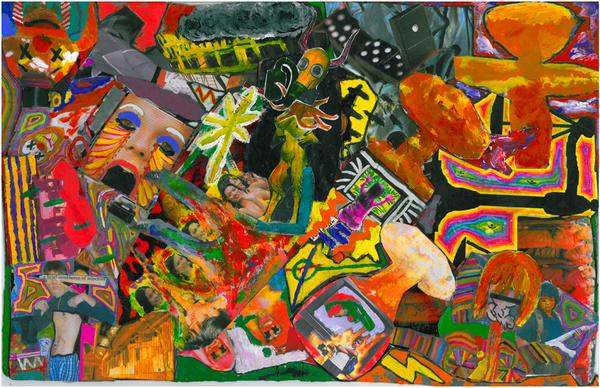 The brothers continue to play assaultive grindcore as the duo Akkolyte. The connection between genres is explained in the title of an early YAE tune: “Free Jazz is Thrash, Asshole.”

Aaron has also ventured into more cerebral realms. Besides helping to bring the No Idea Festival of avant-garde improvisation to Lola’s Stockyards last spring, he convened Age of Disinformation – a sort of Metromess underground supergroup – for a one-time performance at Dallas’ Bathhouse Cultural Center in May 2008. With Aaron on growling vocals and conducting, the band included a couple of Zanzibar Snails (Michael Chamy and Mike Maxwell), The Great Tyrant’s Jon Teague on modular synths instead of his usual drums, and two members of Dallas’ Tidbits (multi-instrumentalist Kim Corbet and ex-New Bohemians guitarist Kenny Withrow).

You won’t hear a discernable melody on Age of Disinformation’s debut eponymous album, nor is there a pulse you can dance to (except in your mind). The sounds extemporized by the sextet run the gamut from ethereal to industrial. While the program notes call the single album-long piece “an improvisation on the current state of psychological and spiritual breakdown as it relates to viral ecosystems of economics of information,” that’s really just hazy boho jive. These are some spacy jams, equally influenced by Sun Ra’s saturnalia and the more kosmiche aspects of Krautrock. Not for the faint-hearted, but if you immerse yourself in this sonic bath, you may emerge psychically rejuvenated. Cop via www.mayyrh.com.