I had to go to Bone Daddy’s House of Smoke in the Arlington Highlands Lifestyle Center to get a gift card for my neighbor’s birthday. Believe me, I’d never, of my own volition, go to a place described as “like Hooters, only better.” I have “hooters” that I can look at any time I want. I don’t need to see someone else’s, and I don’t like the ejits that seem to be attracted to any slang word regarding female anatomy, like the dudes who just read that last sentence and giggled about my use of the word “hooters.”

To get my drift, fellas, imagine how much fun you’d have in a place called, say, Big Dicks, and where the servers, all male, wore Speedos showing just a little bit of the curlies and with photos of various “excited” men on the walls, focusing on the area of excitement. 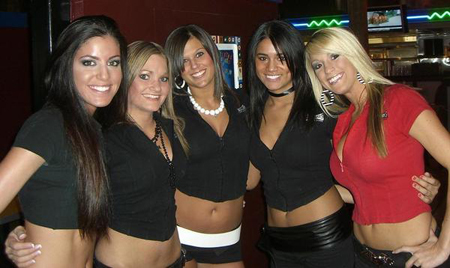 You’ve got to give Bone Daddy’s props for a couple of things, though. One, the company is locally owned — Bone Daddy’s also has locations in Austin and Grapevine, and the original Bone Daddy’s is in Dallas. The Hooters empire, on the other hand, is based out of Georgia. Bone Daddy’s also gets points for its charitable work. Owner and founder Mike Leatherwood, who also owns a majority share in the Razzoo’s Cajun Café empire, regularly and publicly donates to charity, and his Bone Daddy’s empire has raised about $20,000 for Komen for the Cure over the past few years, mainly through merch sales. Well, then, if it’ll save the ta-tas, next time I’m in, I’ll have to buy me a Bone Daddy’s t-shirt, maybe the one that says, “Ribbed for Your Pleasure.” (Yes, that shirt does exist, and, yes, Bone Daddy’s sells it.)

Leatherwood clearly envisions a world where everyone wears a Bone Daddy’s t, even the ones with slogans too horrible and sexist to repeat here. The owner/founder plans on eventually, uh, expanding into Houston, Las Vegas, and Denver.

Bone Daddy’s marketing attack is anything but subtle. “We know what you want,” according to www.bonedaddys.com. And what you want, at least based on evidence at the Arlington location, are young, tan brunettes who all seem to have stepped out of that Britney Spears video. You know the one. Teeny skirt. Teenier top. Black heels with white lace socks. The kind of stuff that no woman wears unless she’s going to a Halloween party at the Playboy Mansion — or working at Bone Daddy’s.

When I told this to my longtime college buddy, he corroborated. “Bone Daddy’s women,” he said, “are these dark, seductive vixens compared to the girl-next-door Hooters girls.”

Predictably, Bone Daddy’s bar was full of mostly middle-aged, ball-cap-wearing, beer-drinking guys. If I were a kinder, gentler woman, I might say that they were there for the happy-hour specials. Monday through Friday domestic pints are $3, well drinks are $2.25, a 32-ounce “Big Beer” is $5 for domestic, $5.50 for imported. Not bad. Not bad at all. As long as you have a high tolerance for leer.

But if I said that the dudes were there just for the beer, I’d be lying. None of the guys were talking to each other. They were all vying for the attention of the three — did I mention extremely pretty and extremely nubile? — female bartenders. Perhaps I was a nice distraction for the ladies, because I did get quite a bit of attention from the gals in the 15 minutes it took one of them to figure out how to produce my gift card. One gal liked my earrings. Another complimented me on my top. I think she meant my “shirt.”

There wasn’t a woman there (aside from me) over age 30. And the women who were there were employees and were basically naked: so much cleavage, of both the frontal and gluteal varieties. In men, revealing butt cleavage just isn’t attractive. Objectively, I have to say that booty cleavage in women is OK. I think the room had begun to spin a little at one point, because when one gal bent over, giving me a great view of the tribal tattoo on the small of her back, I seriously had to will my hands not to reach out and, y’know, make sure she wasn’t wearing any shapewear, because, while ogling seems to be acceptable, I’m sure that touching is a no-no.

I told this story to a writer friend who spent years managing bars and clubs. He opined that, “Most of those girls are there putting themselves through college.” Eee-yeah. Because the tattooed one looked like she had a copy of Sullivan’s Fundamentals of Statistics stashed behind the bar for the scant three or four seconds a day when she isn’t being hit on by customers.

I don’t know what the stories are behind the lovely ladies of Bone Daddy’s, and I have to say, I really don’t care. You get what you tolerate. I’m pretty sure the tips are enough to keep the gals in itsy-bitsy tank tops until 2025 — or sooner, when sag sets in.

To be fair, my neighbor, who also happens to have hooters, really likes the food there. And I have to admit, the scent of hickory and charcoal blanketing the place was … aphrodisiacal.
— Laurie Barker James