Present-day Fort Worth and ’90s-era Deep Ellum are about to clash. Topping a four-band bill at Lola’s Saloon-Sixth this weekend are Haltom City’s mighty Me-Thinks, who, as they’ll freely admit, are a little perplexed by their choice slot. But that’s the reward for longevity — The Me-Thinks have been together for about seven years now. 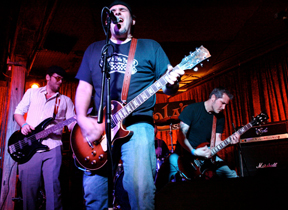 “The Dangits are a surprising band, even to themselves,” said part-time promoter Jamie Kinser, and she should know: She regularly books them to play at Caves Lounge in Arlington. In a live setting, The Dangits provide a shock to the senses not only with their level of volume and energy but also with the aura of professionalism they project, although their frontman, singer-guitarist Mike Noyes, would have you believe that the band is “just a goof.”

Their performance belies that assertion. There’s no dead time during their sets, and they can pull off evergreen, iconic stage moves — like lifting their guitars up in the air or resting their feet on the monitors — without deteriorating into Spinal Tap-like self-parody. No small feat.

Make no mistake: Far from being the new kids on the block that their best new artist award might imply, this is a band with pedigree. Back in the ’90s, Noyes played in Speedealer, while his guitar-slinging onstage foil, Branden Smith, was in The Soup. Around the time the millennium changed, Noyes hung up his rockin’ shoes to embark on a career as a chef. “I could never work in a restaurant while playing in a band,” he said.

When he and Smith ran into each other again a few years ago, Noyes had to shake out the cobwebs. “I don’t remember much from those [Speedealer] days,” he said.

The two joined forces with bassist Paul Blank and drummer Terry Shanks and had their first practice in January 2008. Since then they’ve gigged extensively. Besides Caves and Lola’s, they’ve played shows at Pitcher’s in Arlington, Bronco’s in Hurst and, on Elm Street in Dallas, Reno’s Chop Shop, Prophet Bar, and The Lounge, finding fans everywhere.

The Dangits’ songs are tough, taut, fast, and fiery creations that blend aggression and rough humor, without frills. The titles tell the tale: “Get Up and Go,” “Rock is Dead,” “We’re Through,” “Wasted.” Think: Motörhead, Hellacopters, or The Dictators. And while there are elements of both metal and punk in The Dangits’ sound, they prefer to think of themselves as an un-hyphenated, pure rock ‘n’ roll band. It’s a style that’s never exactly fashionable yet always seems to keep coming back like a bad penny. At a time when the original punks are turning 60 and novice rockers have no idea who Chuck Berry might have been, The Dangits are almost a throwback.

On a recent weekend gig at Lola’s Saloon-Stockyards, Noyes dedicated the song “Equalizer” to “everyone that came here on a motorcycle,” and he meant it, being a bike enthusiast himself (like all of his bandmates). Resembling a beefy, barrel-chested, goateed Christian Bale, he planted himself behind the microphone in a fighting crouch and roared above the din churned out by his and Smith’s low-slung Gibsons and the pummeling rhythm section.

On this particular night, Shanks was replaced behind the traps by Noyes’ former Speedealer bandmate Mark Baker, who post-Speedealer went on to drum for five years with the legendary Ministry. Here he added flash and panache to the proceedings. To his left, pompadoured Smith looked for all the world like a wayward rockabilly cat, running through the full repertoire of splay-legged guitar god poses. To his right, Blank was cool in shades, boho beard, and cap, laying down the foundation on bass. The four musicians blazed away with absolute authority, and the headlining act had to work hard to follow them. (Full disclosure: I can attest to this because I was in the headlining band.)

In spite of their imposing stagecraft, The Dangits refuse to take themselves seriously. “This is all just for fun,” said Noyes, “which makes it a totally different experience for me.”

These days, he still makes his living in the kitchen but on a private contract basis: He’s not slaving away on some restaurant’s line. With a year of honing material under their belts, The Dangits now plan to record an album after Christmas. If they’re able to capture their live show’s galvanic impact in the studio, that record should be very good indeed.