Here’s one thing you need to know about The Usual, a chic new lounge on West Magnolia Avenue on the near Southside: The drinks aren’t cheap. To be fair, the drinks aren’t easy to make — The Usual specializes in Prohibition Era libations, including the Cosmo, Mojito, and Sidecar, drinks that take a couple of minutes and some appreciable mixology skills to concoct correctly.

Plus, only top-shelf hooch is used, and The Usual is one of only a few places in town where you can ask for a Cosmo and not get the stink eye from your bartender. 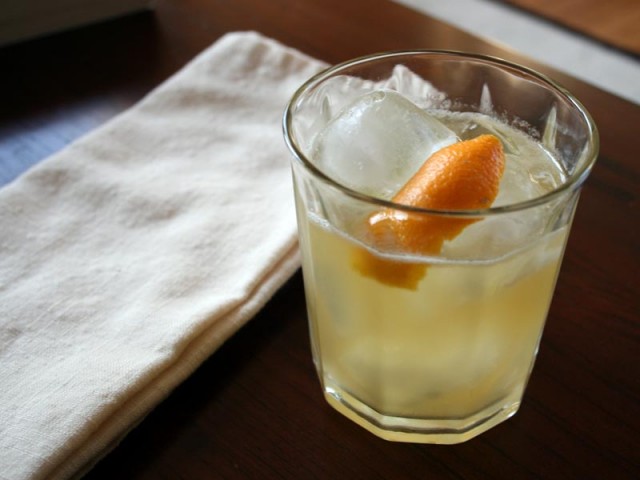 While most bars are perhaps rightfully more concerned with volume than quality, The Usual appears to be all about the customer’s experience. If 15 bucks for a cocktail (a Vesper, specifically) or 10 bucks for two beers would cut your available balance in half, then perhaps you’d be better off boozing someplace else. The always-affordable Chat Room is within walking distance, and unlike The Usual, where smoking is permitted only on a small but sleek back patio, the Chat is all smoking. “Smoke up, Johnny!”

The elegance of the drinks extends to the interior design. The front of the building isn’t much to look at. It’s just a red brick box — the only hint of high style inside is the signage: The lounge’s name is spelled out in straightforward, thin, metallic lettering. The inside is transportative. To where? Maybe the Upper East Side. Or one of Dallas’ swankier zip codes.

Designed by Kara Keith, built by Bill Smith, and featuring a palette of mostly blond wood paneling and a warm shade of white paint, The Usual’s interior is a Modernist’s dream. Just about everything is at right angles with everything else. The booths cut into the blond wood-paneled walls are square, the cream-colored tables are square, the maroon couches are rectangular. Only the circular mirrors on some of the walls and the metallic globular lights hanging over the booth tables break up the straight lines.

A preponderance of strong, simple geometric forms is a hallmark attribute of early Modernism (circa 1930), when the increased affordability and safety of international travel allowed goods (and influential people) to be easily transported. The German design school Bauhaus began producing inexpensive furniture on assembly lines that was functional and industrial, hence the simple geometric shapes and basic materials.

Anyway. The style is in sync with with the cocktail menu. Is The Usual breaking new ground? Not internationally. Philippe Starck has been designing Modernist interiors for restaurants and hotels since the 1980s. But The Usual is certainly novel here. And it’s a welcome addition to Clubland in more ways than one. — Anthony Mariani

One of the most entertaining reality shows on TV has to be The Amazing Race, a treasure hunt that sends contestants all over the world. The next best thing around here will be the fourth annual Urban Dare, a similar kind of race but one that will send contestants all over Fort Worth, solving clues and doing light physical challenges to get from checkpoint to checkpoint. Kicking off on Saturday at noon, Urban Dare-Fort Worth will start and finish at The Ginger Man Pub (3716 Camp Bowie Blvd. in the Cultural District, 817-886-2327). Check-in begins at 11 a.m. and will continue up through the start of the race. Proceeds from the $55 per person entry fee will go toward the fight against breast cancer. The winners will receive a three-day Royal Caribbean cruise in February, when they will compete for $5,000 in the inaugural Super Dare against other regional winners — the Fort Worth edition is one of a couple dozen happening all over the country. — A.M.