Three musicians who met in a class at Texas Christian University six years ago founded the band Stella Rose under the auspices of loud rock and limitless potential. Youthful abandon informed the grunge-heavy, gritty rock sound that the band employed on its first two albums. Drummer Matt Mabe, bassist McKenna Madget, and frontman Stephen Beatty all graduated more than two years ago and are now navigating the adult world of rent and debt while continuing to pour their hearts into music. In Drag, Stella Rose’s new and third official disc, the trio shows that musicians can grow up, too. 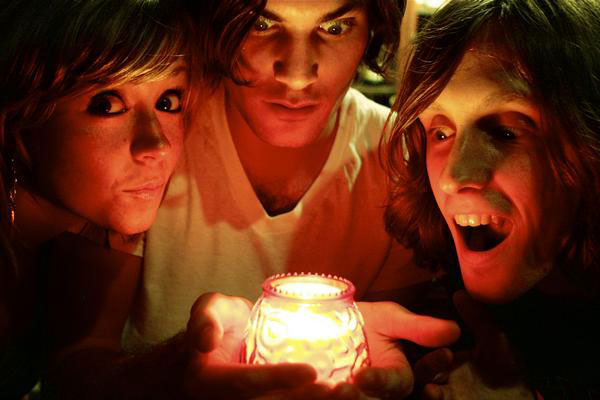 Shortly after their anticlimactic TCU graduation day, Stella Rose members pooled their collective gift money and hightailed it on a summer tour to the Northeast. “It was reassuring,” Mabe said. Their raucous live performances and low-hum rock sound pleased audiences who had no social ties to the band. New fans scooped up merch and copies of the two albums, Nine Caged Tigers and Starving, Hysterical, Naked. The good reception proved that “maybe we should keep doing this,” Mabe said.

Beatty never had a doubt. “Music is all I want to do,” he said. All of his drive and experience shine through in Drag, recorded over the last year in Fort Worth at Fusion Project Studios. The new album is a departure from the old material in several ways. When it came to inspiration, Beatty shifted his whole focus. “I used to write about myself,” he said. “It was selfish, but now I’m looking out. I’ve always considered myself an outsider. I watch how other people act and mimic that. Drag is more social commentary.”

Musically, Drag tightens the reins on Stella’s noisy fury. “The old stuff is loud and brash,” Mabe said. “Now, it’s more demanding.” Stella Rose’s past material could be sprawling at times and was often defined by Mabe’s whirlwind of activity on the drum kit. While he is still “Mad Matt” on Drag, his playing, he said, “is a little more to the point.”

Stella Rose also experimented with several different styles of music on the album. Whereas almost all of the band’s old material could be considered low-fi and grunge-y, the new stuff represents a move into more modern, accessible territory, which involves blues and syncopated rhythms at times. Zaq Bell at Fusion suggested adding synthesizers, a transistor radio, and cello to the recording. The band happily agreed.

Drag features more of Madget’s harmonizing, and the diverse elements and styles — even some acoustic guitar — fit nicely together. “The songs show an evolution of all of us,” she said. “It was more of a collaborative effort.”

The song “Everybody’s Looking for Love” epitomizes the new and improved Stella Rose. Beatty employed vintage pedals to produce his characteristic moaning wail of a guitar sound. His low voice, coupled with Madget’s spacy harmonies, lend the song a calm exterior. Mabe’s drums and Madget’s bass still pound heavily in the underbelly but don’t detract from the overall mellow vibe of the song. Few bands can be simultaneously nonchalant and amped up, but it is in this duality that Stella Rose really shines.

That, and in their live performances. “We let loose, have some fun,” Mabe said. At some point during any Stella Rose show, Mabe or Beatty will hang from the rafters or take off his shirt and generally rave around like lunatics. “If the band looks bored,” Mabe said, “everyone is bored.”

Although they couldn’t be more pleased with the new direction their music has taken, the band members still wish they could quit their day jobs and just play for a living. Unfortunately for Stella Rose, the current economic climate hasn’t meant big paydays for talented yet unknown musicians.

Work, in this case, is a necessary evil. Beatty does floor production and camera work for the local CBS TV station and plays acoustic solo shows at least twice a week. Mabe does graphic design work for a suburban newspaper. He also freelances in sports production and plays in several local outfits. Madget relocated to Austin to work for Time Warner in advertising.

While Madget’s departure may have slowed Stella’s show schedule, it also gave the band a few benefits. They now have followings in Austin as well as Fort Worth, and the geographic separation ended up strengthening individual ability.

Madget doesn’t have regular band practice, so she hones her skills by playing along to her iPod, which, she said, has expanded her musical vocabulary. “I’m more confident in my skills as a musician now,” she said. “I’m not just a chick in a band. I’ve actually gotten good.” Even if some sound guys refuse to shake her hand, assuming she’s with — not in — the band, Madget can hold her head up high as a card-carrying member of the legitimate-musicians club.

Dreams of opening for Black Rebel Motorcycle Club or Queens of the Stone Age still exist. Drag just needs to end up in the right ears.

“We put everything we had into the album,” Madget said. “I couldn’t be more proud. … I just want people to listen and give it a chance.”

Sat w/Airline and The Room Sounds at The Moon, , FW.