Frances Saperstein is 81 and suffers from Parkinson’s disease She taught in the Fort Worth school district for a decade before her illness forced her to quit at the end of the 2008 school year. But a stress-free retirement was not in the cards for her.

In fall 2009 she received a call from the district’s legal department, asking that she repay $4,272 that the official said had been wrongly deposited to her bank account between April and August 2009 due to a glitch in the payroll system. But the district wasn’t just asking for reimbursement of excess take-home pay – officials were demanding repayment of the gross amount, before taxes and other deductions, said an incredulous Larry Shaw. He’s the local head of the United Educators Association, which is now representing Saperstein. 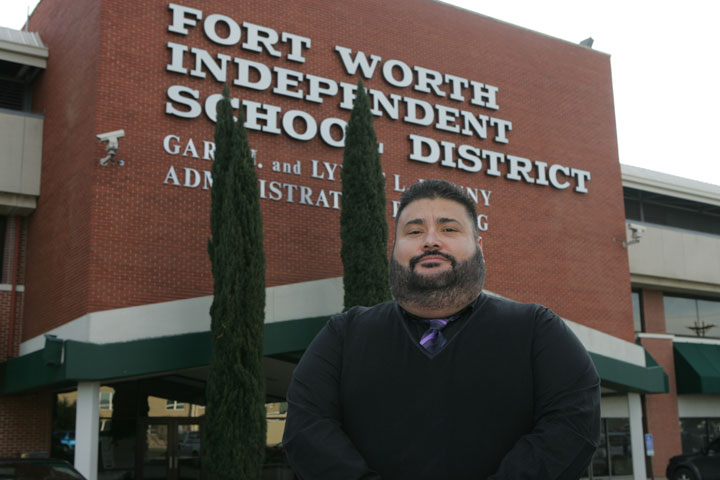 When the retiree, unable to pay back money that she didn’t believe she had received, tried to get answers, the district’s response was to sue her in December, alleging civil fraud and “unjust enrichment,” said UEA attorney Cheryl Rauscher.

“Florence, who has never been in trouble and had an exceptional record [with the district], was so distraught that she told me she would be willing to go back to teaching and ‘work it off’, even as ill as she is,” Rauscher said. “That broke my heart.”

Since UEA became involved, the district has changed its story regarding Saperstein, claiming now that the overpayments occurred in summer 2008, Rauscher said. “But no one [in the district] has been able to provide me with any records” showing excess deposits for Saperstein in either year, she said.

District spokesperson Barbara Griffith said this week, “We are trying to work something out with Ms. Saperstein” to avoid legal action. She said the district has gotten no cooperation from Saperstein – and also that district officials weren’t aware until this week that the retired teacher suffers from Parkinson’s.

The district just made an offer to settle the case for $1,000, Rauscher said, which Saperstein turned down. “We will not settle. There is simply no evidence in the district’s filing to support its claim,” the attorney said. “In my opinion, she doesn’t owe them a penny.”

If you think it’s worrisome that a government entity as big as the Fort Worth school district would be unable or unwilling to document the payroll records involving one teacher, hold onto your coin purse: Saperstein is just one of about 2,000 current and former employees whom an internal audit shows were overpaid a total of more than $1.5 million last year, in a massive foul-up caused when the district shifted to a new payroll system before kinks had been worked out and employees sufficiently trained.

The district had known for years that its 1970s-vintage payroll system needed replacing but moved to get a new system running only after IBM, which manufactured the old system, notified Fort Worth officials that it would no longer service it.

District Superintendent Melody Johnson has praised the internal audit, as have school board president Ray Dickerson, a banker, and trustee Chris Hatch, a CPA who heads the board’s audit committee. All those officials say that the district has been open about its problems and is now fixing them.

But two other school board members, along with UEA leaders and former district employees, say the full scope and causes of the district’s payroll problems have not yet been revealed, and they want further investigation. Johnson, Dickerson, and Hatch disagree.

Among the questions and problems noted by trustees, former employees, and the auditors themselves:

The internal audit report, released last Friday (Jan. 15), showed that in the first nine months of 2009, about 2,000 of the district’s 13,000 to 15,000 workers had been overpaid. The district also paid out a total of about $129,000 to 26 people who no longer worked for the district. Most of the overpayments went to the lowest-paid ranks of employees. A few unlucky employees who were supposed to be paid got nothing at all for a while.

Of the former workers, 15, including Saperstein, have made no effort to pay back the money, Johnson said. She said those people are now being sued by the district, for amounts ranging from $657 to $28,462.

The new software system was put into place in January 2009 under the direction of Johnson and Wilson. Since then, Wilson has resigned “for personal reasons.”

Johnson described the payroll snafus as “typical of what is experienced when converting from outdated software to state-of-the-art.” Administrators also said that fixes are being put in place to keep similar errors from recurring.

But Vasquez, Rangel, and Shaw say an independent forensic audit of the entire payroll system is, as Shaw said, “the only way we can be sure” that the $1.5 million is not just the tip of the iceberg.

Vasquez said that Johnson initially agreed that an independent audit was needed “but changed her mind.”

Rangel said that an expensive outside audit would still be cheaper than “find[ing] out down the road that the overpayments were greater than we’ve been told or that they are continuing.”

Vasquez said the crisis could have been avoided if Johnson had listened to employees in the Enterprise Resource Planning Department, a group she had specifically tasked to put the new system into operation. Vasquez said the ERP workers knew about the new system’s shortcomings and told him they were passing their concerns on to the superintendent.

In their report, internal auditors documented the same concerns that ERP workers had communicated to Vasquez months earlier, including insufficient testing “to determine pay accuracy.”

“Several of them told Dr. Johnson not to go live with the system because the proper testing and training of the employees hadn’t been done, but she ignored them,” Vasquez said. Many of those employees were later fired when Johnson decided to eliminate the department, he said, raising further questions in his mind. “Did they get fired because they spoke to me?”

Griffith said that the ERP department was shut down because it “was not meeting the needs of the implementation” of the new system. The employees were not fired, their jobs were eliminated, she said. All were offered positions in other departments, but they either weren’t hired or they chose to leave, she said. The problem was not poor performance by workers, she said, but that the department “just wasn’t a good fit organizationally.”

When the new system went online, thousands of employees began descending on administration offices last January demanding that their checks be corrected. The crisis continued through September.

Initially, administrators blamed “human errors” by the payroll department for the mess,  according to several former employees who were involved in the process but asked not to be identified.

One of those former workers said she was “dumbfounded” when told last year that the new software would be put in place in time for the January 2009 payroll.

“We were vilified,” another said. “But in the end we were vindicated.”

Johnson said she “had no warnings” not to go live last January. “This is simply not true, but it is a persistent rumor throughout the district, and I don’t know where it started,” she said. “There were certainly lots of people with lots of opinions [about the new system] and endless meetings. But no one stood up and said, ‘This isn’t ready.'”

By January, she said, the implementation had already been delayed by three months. “I agree that more comprehensive testing could have been done, but we were in a situation that if we didn’t start it at the beginning of the year, we would have reached a point of diminishing returns because we were losing IBM,” she said. “We made the decision to go forward.”

“The important thing to remember is that this process has been completely transparent,” Dickerson said. “We are holding nothing back from the public. …The people will forgive honest mistakes if we admit to them and tell the truth. What they won’t forgive is a cover-up.”

One question remaining is whether the expense of legal fights with current and former employees will wipe out whatever overpayments the district does collect.

One current worker, whom the finance department twice turned away before allowing him to repay the $1,000-plus he had erroneously received, said he believes other court fights are a real possibility. And three of the former workers in the ERP department have filed whistleblower lawsuits against the district.