In her recent, cautiously positive review of Extraordinary Measures, film critic Dana Stevens advanced the idea on Slate that the movie world’s new guilty pleasure is pablum rather than pulp. In other words, slasher flicks, cheap thrillers, and lowbrow comedies have lost their disrepute. Instead, it’s now more shameful for moviegoers to admit to enjoying decorous weepers pitched at middlebrow female audiences that feature softly romantic lighting, soft acoustic music on the soundtrack, and softly attractive lead actors.


I’m not sure whether I agree with Stevens’ idea or not – pulpy movies still tend to get stiffed when the Oscar nominations come out – but I do find it food for thought. What I do know is that Dear John is a prime example of pablum, and it demonstrates why the stuff deserves its bad reputation. 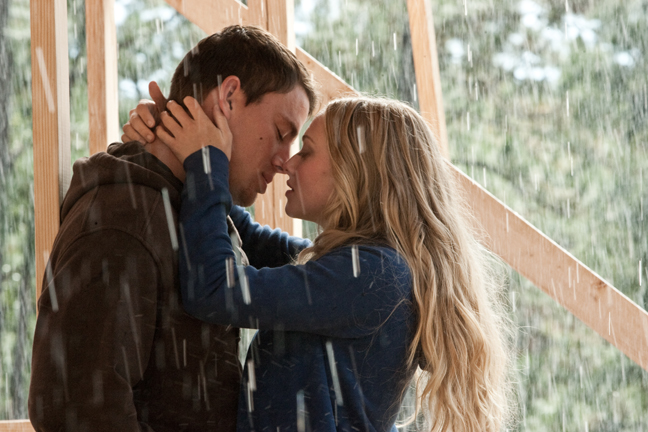 The movie is based on a Nicholas Sparks novel, so you should expect pablum going in. Sparks is a terrible writer whose books are insanely successful, which would be of no concern to moviegoers if those novels didn’t subsequently hit the big screen. From the soul-sucking 2002 teen romantic tragedy A Walk to Remember to the excruciating 2008 midlife romantic tragedy Nights in Rodanthe, the adaptations have all had different directors, yet they all resemble one another in their narcotizing good taste, lethargic pacing, and self-consciously “poetic” visuals. The high-water mark from a financial standpoint was 2004 The Notebook. Abuse me if you want, but that box-office hit isn’t appreciably better than its fellows. There’s no end in sight to the Sparks parade, either: The Last Song, starring Miley Cyrus, comes out in a few months.

Dear John begins in spring 2001, and, like many of Sparks’ stories, it’s a romance between a proper Southern girl and a guy who’s just a little bit disreputable though not enough to be interesting. The girl in this case is Savannah Curtis (Amanda Seyfried), a college student from an old-money South Carolina family who dreams of using her wealth to help disabled children. The guy is John Tyree (Channing Tatum), a soldier on leave who hails from nearby and who fishes Savannah’s purse out of the ocean after she accidentally drops it off a pier. They fall for each other over spring break, and after he’s shipped overseas they keep in touch with an old-fashioned written correspondence necessitated by his lack of access to e-mail. The 9/11 terrorist attacks cause him to extend his tour, and the increasing length of time they have to spend apart strains their relationship to the breaking point.

OK, Hollywood needs to stop trying to make the Channing Tatum thing happen. It’s simply not going to work. He’s pretty much the definition of a wooden actor, unable to express much either through his face or his heavy Southern molasses voice. Tatum moves well and has a sculpted upper body that most men would kill for, and that suits him for portraying soldiers either in a romantic film or an action movie. Yet he gives the same stiff performance regardless of what setting he’s in, and all you have to do is compare him to a dynamic, nuanced actor such as Joseph Gordon-Levitt (who co-starred with Tatum in both Stop-Loss and G.I. Joe: The Rise of Cobra) to see how deficient Tatum is. Not since the heyday of Freddie Prinze Jr. has Hollywood given so many high-profile leading roles to an actor with so little to offer.

Then again, movies based on Nicholas Sparks novels have a long track record of swallowing up better actors than him, including Seyfried here. (I pause to note that Seyfried composed the song that Savannah sings to John.) Director Lasse Hallström, who briefly became an exciting filmmaker three years ago with The Hoax, has now gone back to the same comfortable creative rut from which he produced Chocolat and The Cider House Rules. He drowns everything in thick sugary syrup and makes sure that nothing – not the 9/11 attacks, not John’s being wounded in action, not Richard Jenkins’ unself-pitying performance as John’s autistic father (responsible for the movie’s one true moment, which takes place in a hospital corridor) – disturbs the placid surface of Dear John.

Of course, that’s precisely what quite a few ticket-buyers for this movie would want. Tearjerkers like these give you characters who round off all their sentences perfectly, regardless of what violent emotions are supposed to be possessing them. That’s because real feeling might shake up the audience too much. You know what? That’s not calming. It’s numbing. The trap about pablum is that it ignores or simplifies the messiness of life and the ways people deal with it, until we can no longer believe in what we’re seeing. That’s what makes it a fraud.