A front-runner for the Best Foreign Film Oscar this year, The White Ribbon is Michael Haneke’s first German-language film since his original version of Funny Games back in 1997. This period piece, however, is less about shock and more along the line of a creepy meditation on evil, like his 2005 French film Caché. 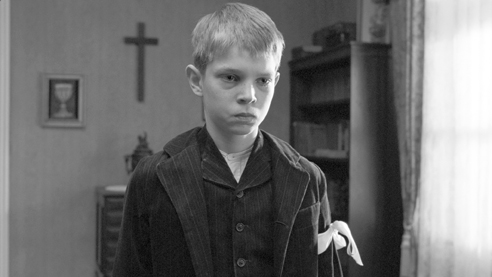 Set in a village in northern Germany in 1913 and 1914, the film is seen through the eyes of the young schoolteacher (Christian Friedel). The adults in this village, from the wealthy baron to the farmhands who work his fields, are thoroughly rotten human beings who abuse their children in myriad ways. The real monsters in this place, though, are the children. They’re setting buildings on fire, causing accidents for the adults, and practicing torture upon each other for no discernible reason.

Haneke mercilessly peels back the façade of this humble, pious, God-fearing community and shows us the moral decay underneath. There’s a nauseating scene in which the pastor (Burghart Klaussner) tells his son a story about a boy in another parish who died an excruciating death from too much masturbation; the scene would be funny if the kid weren’t weeping uncontrollably from fear and shame. Haneke scarcely needs to tell us that these kids are Nazis in the making. This black-and-white movie has the look of a 1930s film, but the director frequently uses long takes to linger in hallways, inviting us to guess what awful things are going on behind closed doors or out of the frame. The White Ribbon is really a horror movie and an intensely disquieting one.