What was supposed to be a feel-good meeting between an urban developer and a few friendly residents in the Linwood neighborhood was instead turning into Custer’s last stand.


The guy at the podium, Dirik Oudt, was literally and figuratively a man with his back against a wall. “We understand it’s been controversial,” he said. 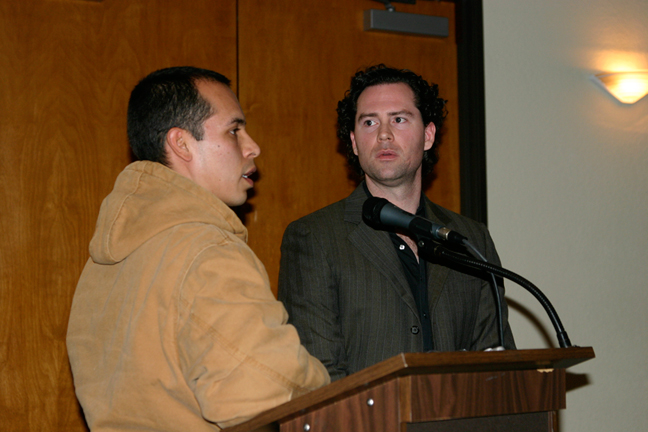 He tried to explain his vision for building apartment complexes in this west Fort Worth neighborhood that adjoins Montgomery Plaza on West 7th Street. He even brought a translator to relay the discussion from English to Spanish. But the crowd was suspicious and outspoken.

One man accused the translator of sugarcoating Oudt’s words in an attempt to blur the facts. Other audience members accused Oudt’s company, Dallas-based IncapFund, of swooping into the low-income but comfortable enclave and trying to yuppie it up with three-story condominiums. Phase One of Oudt’s vision includes 120 new condos and apartments on about five acres on or near Foch, Mercedes, and Merrimac streets.

“They would tower over the residential homes,” Linwood resident Mary Byrd said.

“Would you want that next to your house?” Byrd said.

Currently, the five acres don’t boast much beyond deteriorating rental properties and vacant lots. In Oudt’s view, the condos would add luster to the neighborhood, increase property values, and provide more housing opportunities.

A longtime resident, however, said Incap Fund has allowed its properties to deteriorate to justify tearing them down so the company can build apartments.

Oudt said most of the properties were neglected and unoccupied when the company purchased them.

Several in the crowd questioned Oudt’s ethics, saying an Incap Fund representative had gone door-to-door and misled residents. To get them to sign a support agreement for a proposed zoning change, the rep had allegedly told each homeowner that everyone else had signed.

A man asked Oudt what he had to say about that.

“I don’t have anything to do … uh … I don’t know what the person told you,” Oudt stammered.

Welcome to Linwood, a once-obscure little neighborhood, circa 1940, that now has what every realtor and developer savors — location, location, location. Redevelopment of the West 7th Street corridor between downtown and the Cultural District is bringing a wave of commercial and multi-family properties into the area, and Linwood is perched just north of the biggest development so far: Montgomery Plaza’s high-rise condos, offices, small retail shops, and discount stores.

Many in Linwood just want to be left alone. They enjoy their sleepy little neighborhood, where residents know and look out for one another, a place where the aging frame houses aren’t impressive, but they’re comfortable and homey. “We’ve been here for years, and we want to stay here,” Anita Mendiola said. “We’re fighting rezoning.”

For a neighborhood made up of mostly working-class minorities, including some who don’t speak English, Linwood has done a remarkable job of circling the wagons. Gentrification and urban renewal can be tough to stop when deep-pocketed developers and city leaders are on a mission.

Mother Nature made the first onslaught on the neighborhood: The major  tornado of 2000 hit the area before going on to cut a swath through downtown. Many homes were destroyed or damaged. Some residents were later cheated out of federal aid and insurance payments when they discovered staggering loopholes in the contracts for deed under which they had purchased their properties.

Some residents would like to sell at the right price but aren’t in areas of the neighborhood that developers are seeking. Those residents aren’t inclined to support a zoning change that’s only going to mean more people and traffic and potentially higher property appraisals and taxes.

Oudt said former Fort Worth City Council member Wendy Davis was a proponent of his plans and even initiated a zoning change a couple of years ago that included some but not all of the five acres. A portion of the land near Linwood Park remains zoned for less dense residential usage. “It was Wendy’s intention to protect the interior of the neighborhood and the park; I believe that is Joel’s intention too,” said Kristi Wiseman, Davis’ office administrator, who also formerly worked for council member Joel Burns.

Now Oudt wants all of his land rezoned to allow three-story multi-family dwellings, including the buffer area near the park. He believes he has backing from city staff and from owners who are interesting in selling their properties to make way for development.

“I think we’re going to be successful,” he said.

He had planned to provide an update last week to a few residents who supported his plan, then tell the rest of the residents at an upcoming Linwood Neighborhood Association meeting. But word got out about the private session, and many residents showed up to confront Oudt.

Even though he feels confident he has enough support to convince the city to rezone his property, Oudt said he is meeting with neighbors at Burns’ urging. “It’s good politics,” Oudt said. “This particular city council member gives a lot of deference to the feelings of the neighborhood folks, as he should. It’s something he recommended that we do.”

Oudt’s long-term vision is to expand his development to other areas of the neighborhood. If Phase One of his plan goes smoothly, he expects to buy up other properties in Linwood for development. “I’m not interested in making anyone sell their property if they’re not interested in selling,” he said. “I only want to rezone what I own. I can’t rezone property I don’t own.”

Old neighborhoods often find themselves scrambling when urban renewal comes knocking. Poor folks living in small frame houses are seldom welcome in hot sections of town, even if they’ve been living there for decades without complaint. The city’s courtship of RadioShack meant corporate headquarters replaced the Ripley Arnold housing projects that had provided shelter to poor families in downtown Fort Worth. Similar attempts to replace the old (poor) with the new (upscale) have occurred or are still going on in Woodhaven in east Fort Worth, on Race Street in the Riverside area, amid the planned Trinity River Vision project just north of downtown, and in other Fort Worth neighborhoods.

City officials push for redevelopment to boost property tax revenue. Developers seek profits. Most agree that change is inevitable when a neighborhood finds itself surrounded by hot properties.

Four years ago, Fort Worth community development manager Christine Maguire told Fort Worth Weekly it “will not be possible to keep the Linwood area the same.”

Oudt told the crowd the same thing during last week’s salty meeting. They might band together and delay the zoning change and slow down or even kill his development plans, he said, but another developer will come along behind him that might want to make an even bigger footprint. “There will be new buildings eventually in this neighborhood,” he said.

Longtime resident Mary Byrd can deal with a small amount of redevelopment, but five acres’ worth of apartments is excessive, she said. “Linwood is an ideal place,” she said. “It’s the last of the land to be developed between the Cultural District and downtown. But most of us love our houses.”