I don’t know how it happened, but at some point last year, I started getting issues of Maxim in the mail. I swear I didn’t ask for them. I think the articles are stupid, and if I ever need to find out what a given starlet or model looks like in her underwear, I can probably find out on the internet. Or from a JC Penney’s Sunday circular.

Nevertheless, as dumb as Maxim is, I still read it – for me, all of the gadget promos and sports timelines and photos of attractive young ladies’ spring-break exploits remind me that I was once part of a coveted advertising demographic. Back when I was between the ages of 18 and 24, I had use for advice on how to fix a hangover, undo a bra, or teach a dog how to get beers out of a refrigerator – in other words, I secretly aspired to live the Maxim lifestyle, one failed homebrewing project at a time. 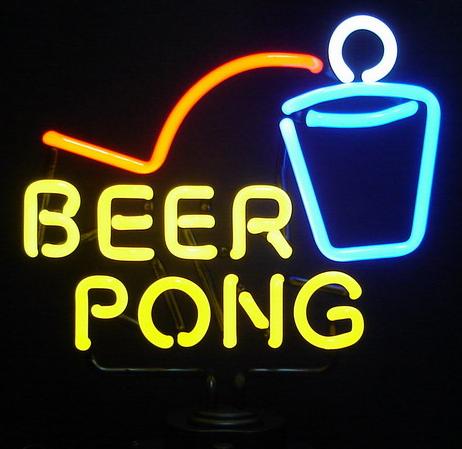 Now I’m a grown-up. I can imbibe without having to play a game or high-five a bro. My mom would probably call it getting drunk during the day. I call it maturity, and I was reminded of it last Monday when I wandered into Woody’s Tavern right in the middle of the Cityview sports bar’s weekly beer-pong tournament.

While I’m not too proud to admit to reading Maxim, I am somewhat proud to say I’ve never played beer-pong. In fact, if not for an article on the beer-pong national championship tournament in Maxim‘s March issue, I wouldn’t know anything about the “sport.” Apparently, I’ve been missing out, because Woody’s was pretty packed.

As you might imagine, Monday’s tourney involved a lot of dudes in backward ball-caps, beer, ping-pong balls, and rap music. There’s a $3 entry fee, and the last man standing gets $20 knocked off his bar tab. Or hers – one of Monday night’s better players was a Barbie, so I guess beer-pong’s an equal-opportunity good time. I also noticed a banner for Woody’s Bar Olympics, of which beer-pong is but one event. The complete list of events was on a sheet above the urinal, with a different event happening every Monday during happy hour for the next five or six weeks, no doubt inspired by the Winter Olympics. I didn’t recognize any of the games, but then again, I haven’t paid much attention to sports of any sort since Kevin Mitchell was a Giant.

I’ll be honest – the Maxim factor was off-putting to me, partly because I wasn’t wearing a backward ball-cap and partly because the beer-pong phenomenon kinda seems like just the latest fad for regular dudes who get off at being good at games. Worse, it smacks a little bit of the America imagined in Mike Judge‘s scathing satire Idiocracy. On the other hand, a drunk is a drunk whether he’s sitting on a stool scowling into his draft beer and feeling superior or standing at a table, throwing ping-pong balls into cups, and cheering, which really means that at 2 a.m., we’re all pretty much champs. — Steve Steward