The clunky family movie Diary of a Wimpy Kid shares its title with a successful series of novels by Jeff Kinney, though the plot comes only from the first book. The wimpy kid in the title is Greg Heffley (Zachary Gordon), an 11-year-old boy who arrives in middle school to discover that he’s one of the smallest kids there. To avoid being picked on, he undertakes several different plans to become one of the cool kids. 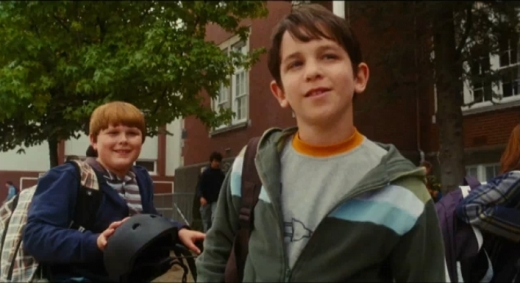 Greg’s adventures fall into a repeating pattern: His plans all blow up in his face while his best friend, Rowley Jefferson (Robert Capron), falls ass-backwards into popularity despite being overweight, wearing the wrong clothes, and riding a girl’s bike to school. Too slow on the uptake to follow Greg’s misguided advice on how to improve one’s social standing, Rowley is fundamentally OK with who he is. Thankfully, the movie never spells out that this is what makes him cooler than our hero. It just shows us Rowley at a mother-son school function doing a blissfully unselfconscious choreographed dance number with his mom, while Greg is ready to die of embarrassment at being there with his own mother.

Unfortunately, that bit of subtlety and grace is totally atypical of this leaden comedy. Awesomely named director Thor Freudenthal, who previously did the equally forgettable Hotel for Dogs, makes hash out of the story’s episodic structure. Most of the film is in live-action, but as with the book, it’s interspersed with Kinney’s line drawings (in a style that’s strongly reminiscent of Matt Groening’s Life in Hell cartoons) that flesh out the story. These work well enough on the page, but on the screen they come packaged with all sorts of other intrusive comic set pieces. Some of these are actually funny, like the badly edited 1980s-vintage film presentation about self-esteem watched by Greg’s class. However, most of these misfire and just take you out of the story.

The status-obsessed Greg isn’t the most likable main character, and he sells out Rowley rather badly late in the film. This is a tough part to pull off, and Gordon doesn’t have the charm to do it. The Heffley parents (Steve Zahn and Rachael Harris) don’t add much, and neither does Greg’s obnoxious teenage brother (Devon Bostick), other than supplying a nice verbal gag by playing in a rock band called Löded Diper. As an older girl who sees through all the phoniness of middle school, Chloë Grace Moretz looks at least two years too old for the place but embodies all the cool that the rest of this movie doesn’t possess, much as it would like to.