Based on an award-winning, Vertigo-published comic, The Losers is about a top-secret Special Forces unit’s quest for revenge on a shadowy figure named Max (Jason Patric), who ordered the commandos’ death following a mission to assassinate a Bolivian terrorist. Max wants to paradoxically restore order to the world by starting a world war. If that doesn’t make a lot of sense, you’d better get used to it. The Losers doesn’t care a whole lot for sense.

Director Sylvain White makes it a comic book movie by giving each of the soldiers an identifiable quirk and look. For example, Clay (Jeffrey Dean Morgan), the leader, wears a suit jacket. Jensen (Chris Evans), the tech guy, has spiky blond hair and never shuts up, giving you the impression that a crack commando team somehow got saddled with a Chili’s waiter. And so on. Unfortunately, quirky and interesting are not the same thing. They’re all jokers, but no one on the team is ever really funny. 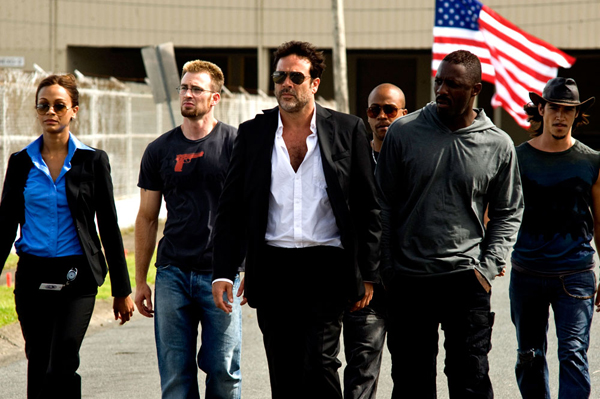 Zoe Saldana shows up early on to get the team back to the United States from South America to assassinate Max. Since she’s the eye candy, there are a couple scenes of her and Clay romping in hotel rooms. The tepid sex is supposed to let you know that Clay has a habit of putting his team in jeopardy because of women, but you could cut the scenes without changing the ending.

Then there’s the villain. Max is flippant, decadent, and prone to casual homicide and condescension toward his underlings. Patric seems to have as hard a time believing in Max’s cavalier menace as you will, and you can’t blame him. For half the movie, he mysteriously wears a single glove. When it comes off, we see it’s covering a diseased, scabrous hand. Nobody seems to notice, least of all the other characters and certainly not the filmmakers. Too bad, because this is the single most interesting thing about the movie.

Of course, even with so many boring principals, a dumb movie can be fun, provided the action is somewhat compelling. If you’ve ever played the Grand Theft Auto games for the sole purpose of piling cars in a road and blowing them up, you’ll probably smirk at a few moments. As a comic book movie, The Losers has leeway to pull outrageous stunts, but none of the over-the-top plot devices offer much to make you care about the story. Written by Peter Berg and James Vanderbilt, the story exists only to deliver some tired shootouts and smart-ass quips that are DOA. You get the idea that the reason why the Losers are top secret is that the rest of the world is too stupid to notice. The script digs holes faster than it could ever hope to fill them, not that the screenwriters would bother trying. After about an hour and a half, the ending rolls around, setting the stage for at least one sequel, presumably to answer all the questions you still have. If the movie ran another 15 minutes, a sequel wouldn’t be necessary. Come to think of it, a sequel isn’t necessary anyway. l