In quite an extraordinary turn of events, Chevron, the oil giant, has  ubpoenaed 600 hours of outtakes from the makers of Crude, a documentary that’s been winning awards right and left for its portrayal of the legal battle between Chevron and the indigenous and mestizo population of the Lago Agrio oilfield in a remote area of Ecuador.

Interesting, you say, but what’s it to me? Stay tuned. 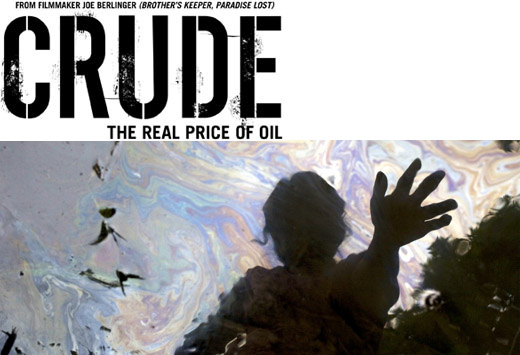 The short version of the background story is that oil giant Texaco, which has since merged with Chevron, is being sued by the 30,000 people of the region for creating a biological death zone around Lago Agrio. The suit contends that over a three-decade period beginning in the 1960s, Texaco systematically contaminated an area the size of Rhode Island by dumping 18 billion gallons of industrial wastewater — poison — into the ground and leaving open oil pits that seep oil for decades. The plaintiffs point out that rates of cancer, leukemia, birth defects, and a host of other illnesses have increased since Texaco and the oil rigs showed up. The Texaco-Chevron merger took place in 2001, making Chevron responsible if the plaintiffs win. Chevron, naturally, would like the lawsuit to go away.

Here’s why you should care: As Sharon Wilson from Texas Oil and Gas Accountability notes, “The same thing is happening in the Barnett Shale, where a lot of gas well pits have been abandoned and simply covered up with dirt, rather than properly sealed.” And there’s evidence that the same thing’s been happening all over South Texas for years.

Filmmakers Joe Berlinger and Mike Bonfiglio spent three years chasing down the legal battle and all its participants. They created what most critics have deemed a documentary masterpiece — but not one that particularly helps Chevron’s case. Nonetheless, Chevron’s attorneys have asked Berlinger and Bonfiglio to provide their outtakes, hoping to find something in there to bolster their contention that the company bears no responsibility for the eco-destruction or the illnesses being suffered by the people of Lago Agrio.

At stake is up to $28 billion that plaintiffs want Chevron to fork over. That’s enough to scare even a huge multinational.

First round in the “outtakes” legal tussle went to Chevron, when a Manhattan federal judge ruled on May 6 that Berlinger had to turn over the material. That decision is being appealed.

In light of Chevron’s record of past ecological disasters — the corporation and its subsidiaries are listed by the EPA as being at least partially responsible for 95 Superfund sites, water pollution in New Hampshire, oil spills in Angola, and violations of the Clear Air Act in California — it’s not surprising that its bosses would like to walk away from Lago Agrio with clean hands.

But you know that oil: Once it’s on you, it’s tough to get off. Just ask the birds and fish living along the Louisiana coastline, or the people whose livelihoods depend upon them.