Actor Andrew Milbourn first tackled the title role of William Shakespeare’s Hamlet three years ago in a TCU production. He was an undergraduate whose only previous experience with the Elizabethan playwright was an eighth-grade production of Twelfth Night in his hometown of Overland Park, Kan.


Performing as the famously obsessive Danish prince –– arguably the most iconic role of the Western stage –– had him “sweating bullets,” he confessed, but his TCU director T.J. Walsh helped him lay the groundwork. And then, one night during the show, the newbie Dane discovered why it’s impossible for any actor to completely prepare for live theater. 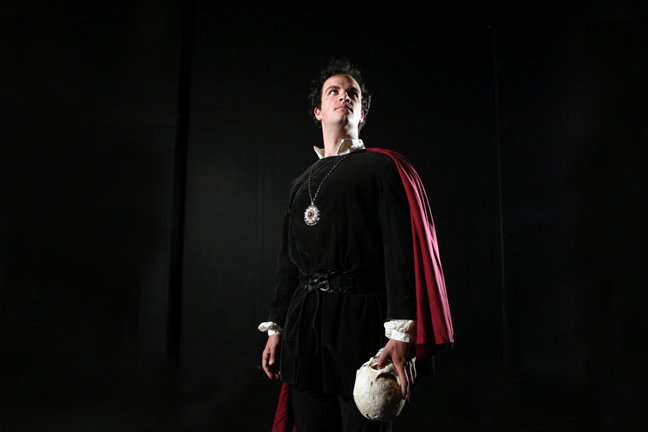 “We were doing a scene where Horatio is supposed to enter and speak with Hamlet,” said the 24-year-old Milbourn. “Horatio didn’t enter. So I had to make up a Shakespearean monologue while everybody waited. It lasted a minute or two. It was supposed to be a prayer from Hamlet to his father, but it was really a prayer from Andrew to God that said, ‘Help!’ ”

Milbourn has since acted in other Shakespeare productions, graduated with a bachelor’s degree in theater from TCU, and earned his Equity union card performing at Casa Mañana and other venues around town. He’s now returning to the role of Hamlet for TCU’s second annual Trinity Shakespeare Festival. Walsh, the festival’s artistic director, again guides Milbourn and the cast through Willie’s bloody, cerebral saga of a brooding young anti-hero charged by a mysterious apparition with avenging the murder of his father by his uncle. The family intrigue has multiple onstage layers: Milbourn is performing in Hamlet alongside his younger sister Kelsey, a theater major. Their mother studied theater at TCU too. (The siblings are also appearing in Much Ado About Nothing, which plays in repertory with the tragedy at this year’s festival.)

Last year, Trinity Shakespeare Festival launched a critically celebrated debut season with versions of Twelfth Night and Romeo and Juliet that were sumptuously decked out by national designers and executed with polish and passion by a mix of talented student and professional actors. Director Walsh seems hell-bent on reviving Shakespeare’s reputation as a master storyteller rather than just an extravagantly articulate but detached and windy philosopher of the human condition. To this end, he recast Milbourn as Hamlet because of the young actor’s “funny, smart, and athletic” qualities.

“Hamlet is a person of incredible energy,” Walsh said. “He is everywhere in this play, actively engaging folks in duels of wit and sword. And within the framework of a tragedy, he uses humor over and over again to find the truth.”

Theatrical giants (Laurence Olivier, John Gielgud, Kenneth Branagh) and movie stars (Richard Burton, Mel Gibson, Jude Law) have scaled Mount Hamlet with varying degrees of success. Walsh and Milbourn watched DVD clips of some cinematic portrayals to help prepare. Interpretive choices generally fall into two categories: attempting to make Hamlet psychologically modern and glamorously narcissistic or play him as an operatic existentialist whose abstract soliloquies about choice, action, and fate sail into the ether. Which direction is a relatively inexperienced actor to take? Milbourn said the author himself is surprisingly clear on how he wants the character portrayed.

“The scene where Hamlet instructs the players as they come in really hit me,” he said. “You’re not supposed to ‘foul up the air with your hands,’ which warns against a lot of poses and overacting. You’re supposed to ‘hold a mirror up to nature,’ to ‘match word with action and action with word,’ which I guess you could say is a natural and ‘modern’ style of acting, although it was written in the early 1600s.”

Milbourn took a firm side in the eternal debate about whether Hamlet is sane or nutty as he taunts girlfriend Ophelia and mother Gertrude and sets up Claudius with the legendary “play-within-the-play” to determine his uncle’s guilt in Hamlet Sr.’s murder. Again, Milbourn found explicit support in the text that Hamlet deliberately feigns insanity to further his own drawn-out mission of destroying Claudius.

“To have someone of Hamlet’s intellect suddenly go crazy doesn’t make sense,” he said. “He tells the audience directly ‘I will put on an antic mind’ to let them in on the performance. The only times he’s not acting [for the other characters] are when he’s talking to the ghost and to his best friend Horatio. The rest of the time he’s calculating.”

Ultimately, director Walsh hopes Fort Worth audiences will abandon all the scholarly chatter at the theater entrance and greet this Hamlet openly. “My guess is, most folks are like me,” he said. “If the production is clear, if I can follow the story, and it’s true to the world of the play, then I’ll take this ride.”