I forget where we started out, but we ended up going to The Wild Rooster Bar, a relatively new joint on that little peninsula between Camp Bowie Boulevard and West 7th Street, occupying the space where Asel Art Supply used to be.

You’ve probably heard of the Rooster. I feel like its owners did a pretty good job of promoting it before its doors opened, and I was interested in checking it out. I’m always interested in a new bar that doesn’t revolve around sports or Irishness (a.k.a. Phoney Mahoney or Baloney Blarney), and given that the Rooster doesn’t aggressively promote either, my curiosity was piqued. 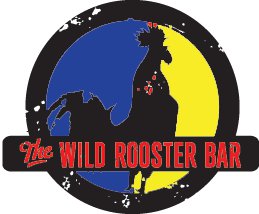 Anyway, my friend and I went to go meet some other friends who were also curious about the place. My first impression was that the joint was way too bright. I mean, it wasn’t like a hospital corridor, but the combination of bright overheads and a lot of blue neon cut into my brain like a bone saw. One friend remarked that they made him feel like he was in the middle of a prison break.

Still, I ordered a beer and a basket of chips and salsa. Whether or not I drink too much is debatable, but I will be the first to admit that when I drink I get severe cases of the munchies. The chips were of some fancy variety that didn’t really knock me out, but they were bottomless, and free refills go a long way. I assumed that the other three dudes at the table would have dived in, but suffice to say, I pretty much ate two baskets of chips by myself. Too bad, because the menu had a bunch of other interesting-sounding stuff, including “San Antonio” brisket tacos. I had no idea brisket tacos were native to the Republic of Spursistan, but once I looked around and asked some questions, I realized that a menu item claiming to be from a place steeped in Texan lore made a lot of sense.

What I mean here is that while the Wild Rooster looks sophisticated in a high-ceilinged, neon sort of way, any hint of fanciness masks a desire to court people who make a big deal out of being rough-’n’-tumble Texans. This is not to say that there’s a bunch of cowboy memorabilia or UT bullshit on the walls. Nor does the Rooster stable a mechanical bull. What the place does, however, is promote Lone Star beer and the aforementioned tacos. It also advertises a “perfect Texas margarita,” and from a glance at the Rooster’s live-music calendar, Texas Music seems to rule the roost. Given the hipster crowds at the joints nearby (Lola’s Saloon, 7th Haven, The Grotto), going native (Texan) is probably the right idea, especially if some near Westsiders are wont to put on their nice boots, go to a bar, and monopolize the jukebox with Pat Green songs.

Of course, the one song I recall hearing while we were at the Rooster was “Empire State of Mind,” so I could be totally off-base. As I started in on the crumbs at the bottom of the second basket of chips, a bartender appeared with another basket. I noticed that the room had sort of mellowed out, and, indeed, the mellow-harshing lights had been dimmed. If you’ve ever wondered if bar staff eavesdrop, well, this is more evidence to confirm your suspicions. But, hey, at least these bartenders are attentive. They’re friendly too, and they made me want to come back again.

The Wild Rooster is not necessarily my thing. Even after the lights were dimmed, I still kind of wanted to go someplace a little more subdued. But I can think of a lot of places that I like a lot less, and if I have to go out with folks who like their nightlife lively, I hope they’ll want to go to the Wild Rooster. –– Steve Steward

The Wild Rooster has won me over the old-fashioned way: exemplary service, dirt-cheap prices, and a diverse menu. (The Rooster’s includes The Elvis, a fried peanut butter-and-banana sandwich with bacon.) After opening a couple of months ago, the Rooster became the Weekly’s go-to spot for happy hour. Socially awkward and always desperate to fit in, I just went with the crowd. I didn’t want to like the place. I loathe Texas Music (see: HearSay, pg. 38), and there always seemed to be a Texas Music song in the air, and since I get out so infrequently, I like going to places where I know I’ll bump into my hipster artist and musician friends (7th Haven, the Chat, The Grotto, Lola’s Saloon) –– the Rooster’s regulars tend to be more apt to bathe regularly, be generally employable, and don’t live in their parents’ basements. But the service was so fast and friendly and the prices so good that I couldn’t not go. Now I feel like something of a regular, which is a good thing. In fact, I’m so comfortable at the Rooster that I have no problem getting up in the middle of a Pat Green travesty, inserting my hard-earned American moolah into the juke, and playing something really wild. Like pre-fried-peanut-butter-and-banana-sandwiches-every-day, Sun Records-era Elvis. –– Anthony Mariani