In the northwestern Italian city of Siena, the Palio is a twice-yearly horse race with religious connotations. In the North Texas cities of Mansfield and Fort Worth, Palio’s is a pizza joint with some unusual features. The family-owned restaurants offer a gluten-free crust option — scandalous for most pizza lovers but useful for those of us who have spent most of the last decade just eating the toppings off our pizza pies. There’s also a whole-wheat-crust option, and both restaurants, pleasantly, are BYOB, which is about as rare in the 817 as a twice-yearly horse race. 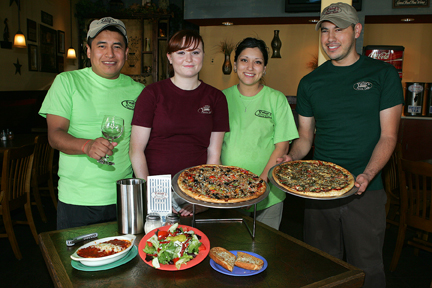 At Palio’s Mansfield location, diners order at the front counter, and servers bring out the food. This is problematic because the menu is so impossibly vast that newbie customers could take a quarter-hour or more to figure out what to order. If you’re not a kind and respectful person, you hold up the line with your indecision. Once away from the chaos of ordering and situated at a table, Palio’s is pretty much like any other local place that offers that odd combination of self-serve/full-serve (Yucatan Taco Stand, Oyster Ranch, Pei Wei).

From the appetizer menu, the baked, skinless buffalo wings are the only non-breaded option. The wings come in several flavors, including a dry rub, which sounded unusual enough to try. The rub was like a traditional barbecue rub, melding sweet, salty, and spicy with paprika for color. The wings tasted fine, but they were a little fatty.

The Greek gyro sandwich was passable. The sliced lamb/beef mix was not sliced fresh off one of those vertical spit things and was a little dry, but the pita was fresh and the cucumber sauce pleasant enough.

As for the pizzas: The tomato sauce was heavy on the basil and rosemary, light on the salt, thankfully. The cheese pizza with traditional crust wasn’t thin enough to fold in half like a New York kind of pizza, but the floppy crust and gooey, slightly soggy middle should please folks who favor that style. We also ordered a whole-wheat-crust pizza with veggies: The granola-health nut at our table enjoyed the pungent whole-wheat flavor, while the rest of us thought no amount of toppings could disguise the taste. But the crust was thin and crunchy, even if it was a little too nutty and whole-grain-y for some of us. For toppings, we went Greek: black and green olives, baby spinach, fresh garlic, roma tomatoes, feta, and mozzarella. The only quibble was that there wasn’t enough mozzarella. As a bonus, all of the veggies –– spinach, mushrooms, tomatoes –– were fresh, not canned.

The real surprise of the meal was the gluten-free pie. With a slightly sweet taste and the texture of thick flatbread, the crust was not as chewy as the traditional, but it was enjoyable even for the folks at the table who can eat real pizza crust.

Leave room for dessert. Palio’s offers wonderful takes on two classic Italian-style desserts. The tiramisu was made the right way, with espresso-drenched ladyfingers layered with a sweet, rich mascarpone mixture. Sometimes in restaurants, the cake part of the tiramisu isn’t softened enough with espresso. That’s definitely not the case here. And the chocolate-dipped, cinnamon-kissed cannoli, stuffed with lightly sweetened ricotta cheese, was a crunchy, creamy bit of heaven. The Chocolate Beyond Reason cake, not on the menu but offered on the day of our visit, was the only minor disappointment. The top layer of light chocolate mousse was delicious, but the middle layer of ganache was cold, almost frozen solid, which made the dessert hard to eat.

Palio’s is very family friendly. Vegetarians would fare well here –– the menu even includes a few vegan pies. The servers could best be described as pleasantly unobservant. For instance, why would someone bring out a pizza pie without bringing plates? Still, it’s nice to sit with a big plate of pizza and a glass of wine (your choice, remember?) and relax as if you’re on holiday in Italy.