Hanging through the end of October at the Fort Worth Community Arts Center will be Fluxhibition #4: Fluxus Amusements, Diversions, Games, Tricks, and Puzzles, a collection of more than 120 Fluxus artworks from 23 countries and five continents. Fluxus is a movement from the latter half of the 20th century defined by multimedia artworks that explore the gray area between camp and high art and that are diagrammatic, collagist, often text-heavy, and often satirical.


Fluxus has roots in the work of such Modernist luminaries as Duchamp, Joseph Cornell, and John Cage and is perhaps more relevant today than ever: In an era of seemingly limitless information (visual, literary, and sonic), Fluxus art sharpens viewers’ bullshit detectors. 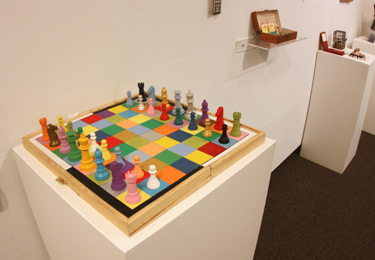 At the center of the international Fluxus movement today is the Ontological Museum, a virtual place founded and curated by Fort Worth’s Cecil Touchon, who came up with the idea after forming the International Post-Dogmatist Group as a student at the University of Texas-Arlington in 1987. “The International Post-Dogmatist Group intended to be totally inclusive of virtually everyone, and you have to exclude yourself from it to not be a member,” Touchon said with a laugh. “It’s not about creating a new power circle of insiders, and everyone else is out. It’s more like a sponge that absorbs everything that’s attracted to it.”

Group members are also “20 minutes ahead of everybody else,” Touchon said, “which is the length of time it takes to explain post-dogmatism to anybody.”

The Ontological Museum has a wing, the Fluxmuseum, whose permanent collection is about 20,000 pieces strong –– except when they’re on exhibit, they reside in a Fort Worth storage unit.

Which brings up Touchon’s current project: achieving tax-exempt status. The hope is that by becoming a bona fide nonprofit, the Ontological Museum will be able to find a permanent home. “The museum is an experiment in global communication, cooperation, and coordination and the idea of capturing across the contemporary moment whatever’s going on within as far as our network can reach out,” Touchon said. “So in the future, if anybody ever goes back and looks over this collection, they’ll see this constantly expanding influx of new people into the thing, and I think that alone is extremely fascinating. But the whole thing is, you’ve got the internet, you’ve got global culture, you’ve got the idea of a museum and artists running it themselves as an alternative to the typical older-style wealthy collectors who go out and buy whatever they like, and later they make a museum out of it. This is more like a working anthropological idea, like gathering bugs or something like that. It’s not about the value of the individual works but about the artistic value of it, its cultural value, its value as a piece of intellectual property as opposed to its preciousness as a collectible object.”

The birth of internet culture gave rise to the Ontological Museum. “The internet created this wonderful playground for these ideas,” he said. “The internet was a tremendous leveling device, because no matter how big or powerful any museum is, you only look at it through a screen that’s the same size as everybody else’s web page. Because of that, if you make your web page look more or less like a museum web site, to anybody coming to it, it looks the equal to any other museum. I mean, how would anybody know just from looking online?”

Before founding the Ontological Museum, Touchon started an e-mail group for collage artists. It eventually became another wing in the museum, the International Museum of Collage Assembly and Construction. Collage artists began collaborating with one another via snail-mail and were encouraged to donate works to the museum. Touchon quickly amassed about 1,000 pieces.

Eventually, Touchon discovered Fluxus via the internet. “Wow, a lot of what these guys are doing, I’ve been doing since the 1970s,” he said. “I realized I was pretty much a Fluxus artist.” He started the Fluxmuseum about four years ago.

The first Fluxhibition, Party in a Box, didn’t go so well –– one of the collaborators refused to return the package that had been mailed to him (and still hasn’t, to Touchon’s great dismay). The second Fluxhibition, New and Improved Fluxus, was a statement group show and fared much better. “A lot of us have been working since the 1970s on Fluxus ideas, but we weren’t connected to those original guys,” Touchon said. “And so there’s been sort of this transition of the old first-generation Fluxus guys and now all of us, but we’re claiming to be that same group as opposed to all the artists who are working with those same ideas but are totally independent and don’t think about a group. Part of Fluxus is group activity. That’s a big element of it.” The membership in the core group is “very elastic,” Touchon said. “It might be 10, or it might be 50 to 100” artists.

For New and Improved Fluxus, “We were introducing ourselves as, ‘We are Fluxus guys, and that’s just the way it is, and if you don’t like it, tough,’ ” Touchon said with a laugh.

The third Fluxhibition, Thinking Inside the Box, was also a success. Consisting of boxes and drawing from both the Fluxmuseum and collagist wing, the group show featured a piece by Yoko Ono and was “really well received,” Touchon said, noting that it also got a “thumbs up” from Picasso Gaglione, an early Fluxus artist who happened to be in town and caught the show, at UTA.

One of the few times that contemporary Fluxus members have met in person was in New York City a couple of years ago. The occasion was the opening for A Book About Death, a massive collection of postcards inspired by the work of early mail-artist Ray Johnson. The celebration was capped by a couple of Fluxus performances, including Requiem for Rubberbands, in which a cantor sang the first few lines of Mozart’s Requiem (inserting “Fluxus” in certain parts) while Touchon and the audience played rubberbands strapped to their fingers like mini-guitars. “At the end we shot them up into the air, and rubberbands were raining down on everyone,” Touchon recalled.

Touchon has concepts for shows scheduled through 2016 and is confident that he could rotate Fluxus exhibitions every month for years “and that’s even if no one sends me any more art.”

Notable Fluxmuseum pieces include “Soul Fart,” a red-and-white-striped handheld object that is placed to the butt (and then preferably photographed) and also “The Key to the Lock is the Box,” a small box made out of keys, including the key that unlocks the box.

Upcoming Fluxhibitions include the Fluxcase Micro-Museum and Fluxface in Space, a part of Face in Space, a NASA program in which fans can upload photos of themselves to be launched into space as part of the two remaining space shuttle missions. Fluxus artists will be taking photos of themselves and their art. A group exhibition will follow, everything leading up to the Jubilee Jamboree, the Fluxmuseum’s celebration of Fluxus’ 50th anniversary.

Touchon, who is represented locally by William Campbell Contemporary Art, could focus only on his own work, but he is driven by a curatorial spirit. “I’m in galleries all over the country,” he said. “I make a living [via my artwork], which is actually kind of hard to do in the art industry, and I do pretty well. So for me, you can promote yourself, but how far does that go? You can promote your career only so much. I want to include a whole lot of other people in my process and my experimentations in life.”

International Fluxhibition #4, A Book About Death