Unless you’ve been living under a rock for the past couple of months, you probably know that Fort Worth City Council member Joel Burns has become a YouTube sensation and a spokesperson for the national “It Gets Better” campaign against anti-gay bullying in schools. After he movingly told his own story, during a council meeting, of being bullied, he was interviewed on CNN, Today, and on Ellen DeGeneres’ talk show. 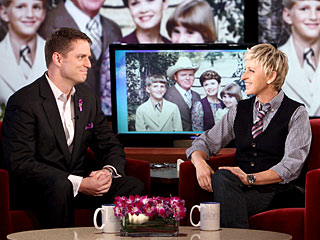 Like all Ellen guests, he received a gift bag that contained a pair of boxer shorts. Burns gave the shorts to the local theater company Amphibian Stage Productions, which was set last Thursday to auction them off via raffle and donate the proceeds to The Trevor Project, a national outreach group for lesbian/gay/bisexual/transgender youth.

Several national LGBT web sites, including Towleroad and Joe.My.God, posted mentions of the Fort Worth undies auction after learning about it from Burns’s Facebook and Twitter updates. Amphibian’s site has received more than 2,100 hits — a whole lot of traffic for them — and had sold more than $600 worth of tickets by Tuesday afternoon. Taking advantage of the flurry, Amphibian has extended the deadline: The drawing will now take place at 2 p.m. Sunday at the performance of Amphibian’s current show No Child… . So there’s still time to get your hands on Joel’s boxers.

If you’ve decided lately that it’s time to actually activate your citizenship card and get involved in local issues, you’ve got two nice opportunities this week — one to participate on an important debate, the other to learn about how you, yes you, as a mere citizen, can help keep our public officials honest and our government open.

The chance to weigh in on Important Stuff runs 9 a.m. to 1 p.m. Thursday at Fort Worth City Hall, 1000 Throckmorton St. The Texas House Committee on Energy Resources will listen to what the locals think about how the Texas Railroad Commission is regulating (hah) the oil and gas industry, especially in urban areas and in particular the Barnett Shale. Static suspects local citizens have a thing or two to tell the legislators on that score. Committee members might want to invest in flame-retardant outfits. Folks can provide brief testimony by showing up and filling out a witness affidavit form. Questions? Call Bernice Espinosa-Torres or Ky Ash, in State Rep. Jim Keffer’s office, at 512-463-0656.

involving public officials. Reporters and others who have been involved in those issues will be sharing their knowledge. RSVP to Kay Pirtle at 817-272-7039 or mkpirtle@yahoo.com. A $5 donation to SafeHaven is suggested but not required.