For the big Super Bowl matchup between the Green Bay Packers and Pittsburgh Steelers, the AFC representatives, the Steelers, will be staying in Fort Worth, at the Omni Hotel-Fort Worth specifically, which means that we will be inundated with black-and-gold-wearin’, “yinz”-sayin’, roughhousin’ Pittsburghers. Word is that Steelers fans travel well. They’ll go way the heck out of their way, including traveling across the country, to see their favorite NFL team play.

Of course, I’m a little scared. 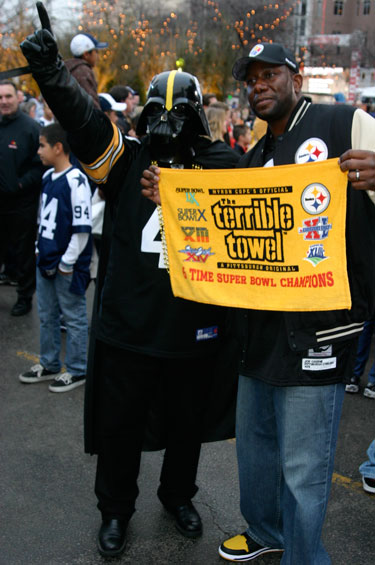 I grew up in Pittsburgh, spent more than half of my life there, and still think of that ol’ Rust-Belt town as home –– my mom and sister still live there –– but I’ve been living in Texas for about 12 years now and in Fort Worth for about seven. Pittsburghers and Texans are very different, and I’ll be happy to learn after the Steelers claim their seventh Super Bowl title that little or no sparks flew between the two peoples.

Now I’m well aware that Texas isn’t short on characters, no way, but Pittsburgh is the only place I’ve ever been –– and I’ve lived in several U.S. cities –– where there’s an unhinged human being around nearly every corner. I could tell you stories (about friends driving through the suburbs and throwing empty beer cans at cop cars, peeing in the middles of bars, shooting one another with BB guns just for a few laughs), but I don’t want to embarrass myself.

Pittsburghers are a rare breed. They’re boisterous, outspoken, and primarily liberal –– blue-collar upbringings up north have a tendency to instill in their products vast capacities for empathy. I think Pittsburghers’ bold, root-for-the-underdog personalities come from feeling looked down upon by the rest of the country. In pop culture, Pittsburgh-bashing is as old, venerated, and American as baseball and apple pie. There’s that famous line from Auntie Mame (1958): “Well, when you’re from Pittsburgh, you have to do something.” And let’s not forget about that 2006 Rolling Stone interview with the beautiful, young British actress Sienna Miller, who was filming in Pittsburgh. After referring to my beloved hometown as “Shittsburgh” (so creative), the lass said to the R.S. reporter, “Will you pity me when you’re back in your funky New York apartment and I’m still in Pittsburgh? I need to get more glamorous films and stop with my indie year.” (Never mind, Sienna, that two Best Picture Academy Award-winners, The Deer Hunter and Silence of the Lambs, were filmed in “Shittsburgh,” though only The Deer Hunter was set there. And let’s not forget that the ’80s pop-cult phenomenon Flashdance was filmed and set in the ’Burgh.)

Basically, there’s not much that can be done to reverse the tide of prejudice toward the Steel City. “Pittsburgh” may always be synonymous with “smog and steel mills” or, worse, “artlessness.”

But we Pittsburghers should always remember that “the Hollywood of West Virginia,” as Pittsburgh has been called, forged the steel that built the bombs that helped win World War II and that some of the world’s greatest visionaries (Andrew Carnegie, Stephen Foster, Andy Warhol, Willa Cather, August Wilson) were born and raised in Pittsburgh.

Fort Worthians should be able to relate to the ’Burgh’s second-class status. I recently read an online forum post in which Fort Worth was actually referred to as “a suburb of Dallas.” And, yes, the writer was serious. Fort Worthians probably can understand how such an existence, one that hardens you to the rest of the world, can make for some loud, obnoxious citizens afflicted with severe inferiority complexes.

And you know what happens when an inferiority-complex-riddled Steelers fanatic has a couple of beers and is in a new city on vacation, right? Oh, boy.

A word of advice: Don’t taunt him if the Steelers miraculously lose. He’ll act like a big baby and either attack you or cry (or do both at the same time). In fact, console him by saying something like, “Hey. Yinz played a great game ’n’ ’at. Yinz should be prahd of yer Stillers. C’mawn. Lemme buy you an Ahrn City.”

After the Steelers beat the New York Jets to advance to the Super Bowl — like, the very second after — my cell phone started buzzing with texts from Pittsburgh friends asking to stay with my wife and me for the big game. No tickets? No problem. My buddies just want to be in the city where their beloved Steelers are creating history. (Well, when you’re from Pittsburgh, you have to do something, right?) And after all the snow that’s fallen on Pittsburgh this winter, you can’t blame a yinzer for wanting to get the heck out of town and head someplace even slightly balmier –– and also to Party with a capital P.

So, sure, I’ve opened my door to all my hopeful Pittsburgh friends, and no matter what happens, I’ll be happy to see them. (I just can’t afford to go back home as often as I would like.) Some of my friends have already visited me here and love –– absolutely love –– Fort Worth. (And, uh, no, I don’t even dream of taking them to Dallas, though some of them still think I live in Dallas, not Fort Worth. What do you expect? Like the rest of the country, they don’t know any better.) First thing we do after they get off the plane is head straight to Joe T. Garcia’s. I know, I know. Joe T.’s food is far from the best Tex-Mex in town, heck, not even in the North Side. But since Pittsburgh’s Hispanic population is minimal and since most Pittsburghers consider Taco Bell the height of fine Tex-Mex cuisine, “Joey T.’s,” as we call it, is a big hit. Equally loved by my Pittsburgh buddies are the Flying Saucer (and not only for the cute girls in the naughty schoolgirl outfits) and, naturally, Fred’s.

Thing is, when my buddies come down, we’re usually so happy to see one another that we get hammered and pass out by, like, 7 p.m., though I’m not necessarily complaining: A well-fed, well-lubricated, contented, sleeping Pittsburgher just might be the best kind of Pittsburgher –– especially in Texas.