Sam Kinch Jr., among the finest Texas political reporters ever, died Feb. 1. On Feb. 18, he would have been 71. Sam earned a reputation during his 40-year career for tenacious journalism, working on behind-the-scenes stories that provide the guts of good political coverage.

Sam also was my mentor and longtime friend. As editor of The Daily Texan, the University of Texas at Austin student newspaper, Sam assigned me to cover the Texas Legislature — which I’m still doing 48 years later. 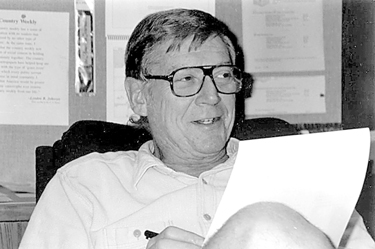 Sam helped me become Texan editor the next year. He coached me later as a professional. My then-wife Saundra and I raised daughters Michelle and Candace with Sam and high-school sweetheart Lilas’ kids, Keary, Sean, and Ashby. Their ages spanned just seven years, and other kids like David Tiede, Nicholas Bonavita, and Liz Mann (Stewart) often joined our troupe for camping and canoeing.

Sam considered a vigorous press critical to a healthy democracy. Tough but fair, he was respected even by the subjects of critical stories. His father Sam Kinch Sr. had been a long-time capitol correspondent for the Fort Worth Star-Telegram.

After college, Sam covered Congress and the White House for the National Observer, Dallas Times Herald, and The Dallas Morning News.

He wrote his own obituary, which appeared in the Austin American-Statesman. In it, he asked mourners to skip the flowers and instead send their $10 or $25 to the College of Liberal Arts Foundation at UT-Austin. Besides the Presbyterian Church, he said, his only long-term commitments were to UT, to the Society of Professional Journalists, and “to Alcoholics Anonymous, which helped him stay sober in his later years.”

His instructions for his memorial service ran six single-spaced pages. They told what was to be in the program and what was not. The preacher, Tom Mitchell, said it was his first time to see included as preceding someone in death two employers — the Observer and Times Herald.

Mitchell said Sam also wrote, “I don’t want anything about sitting down to eat with my enemies. I don’t think I have any.” He instructed his family to have a tale-swapping party at Austin’s famous Scholzgarten watering hole after his service. His family, however — each as independent as Sam — decided to hold it the Saturday before the service, to allow time to rest and to avoid conflicting with the Super Bowl.

Early in 1971, the Sharpstown stock fraud and banking scandal broke — the night before the inauguration. It turned state government upside down.

In 1972, rancher Dolph Briscoe beat both incumbent Gov. Preston Smith and Lt. Gov. Ben Barnes for the Democratic nomination for governor. That year, 76 freshmen were elected to the 150-member Texas House of Representatives.

Sam literally wrote the book about how the scandal unfolded. Texas Under a Cloud, with Ben Procter, told how Houston banker/developer Frank Sharp used quick-profit stock deals to get several lawmakers to pass banking and insurance laws he wanted.

By 1984, Sam thought newspapers were paying too little attention to the nitty-gritty scuttlebutt of Texas politics. With friends George Phenix and the late John Rogers, Sam co-founded and became editor of the newsletter Texas Weekly. It became a “must read” for insiders.

Patricia Kilday Hart of Texas Monthly called Sam “one of the most provocative and thoughtful journalists ever to walk the halls of the state capitol.”

She met him in the 1970s as a UT student intern at the News. “No mentor has ever been so generous with his knowledge and enthusiasm,” she wrote on the day of his death. “His kindness continued when I returned to the capitol — working for his competition, the Dallas Times Herald.

Sam had “a boundless sense of fun, but he also worked harder than any other reporter I’ve ever known.” She learned that after she left the Times Herald, by filling in for Sam to produce Texas Weekly when he and Lilas took their annual month-long vacations.

“Sam had exacting standards,” Hart wrote. “He sweated every mistake.”

She’ll remember him “for his ridiculous ties, gutter humor, and humanity.”

The late Gov. Ann Richards once stopped in her tracks when she heard Hart was subbing for Sam. “Then you have to tell me a dirty joke,” she ordered Hart. “Sam always had a dirty joke for me.”

Sam was firm but fair as a parent, said son Sean. When Sean was about 12, his dad warned if he caught him smoking marijuana, “I’ll break your knees.”

“It sounded like hyperbole,” Sean said. “But with my dad, you didn’t want to take a chance.”

But Sam forgot to pack the suspenders. He said his belly could hold up the trousers. He was right, Ashby said — until he and Lilas headed back up the aisle at the ceremony’s close.

It was “the perfect time for maximum visual exposure,” Ashby said. And Sam’s pants dropped. “There is some debate about whether he did it on purpose,” Ashby said, “because it turned out he was wearing American flag boxers.”

By 1998, Sam and Lilas wanted to spend more time traveling and with family. He sold his share of Texas Weekly to seasoned journalist Ross Ramsey. In 2009 Ramsey sold it to the online Texas Tribune, of which he is the managing editor.

Sean summed up his unique father by quoting Shakespeare’s Hamlet:

“He was a man. Take him for his all in all. I shall not see his like again.”