On their recently released self-titled debut album, The Skeeves tear through several genres of music. From mod-pop to synth-laced industrial trance to gritty, uptempo lounge rock, the Fort Worth foursome covers a lot of bases and in only 11 songs. The shiftiness may be due to the band members themselves, who swap instruments with one another for different songs. The album, however, produced by the celebrated Salim Nourallah (Old 97’s, Fate Lions), never unravels.


From ghostly tales of monsters to incest-themed songs loaded with double entendres, the collection is unified by professional playing, of course, but also, perhaps, by the dark, disturbing imagery that a name like The Skeeves might suggest. But it’s all in good fun. Laughing, the guys say they were banned from one particular North Texas venue for their creepy lyrics. “I’m almost a little proud of it,” said co-lead vocalist Lyle Packer. 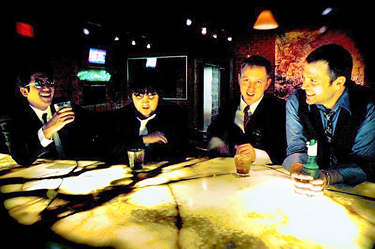 The journey has not been without its rough spots or elbow grease. Packer and Victor Salinas, who mainly plays bass and keyboards, have been making the rounds in the Fort Worth music scene for more than a decade. Initially, they were known as The Hookups. After adding co-lead vocalist Ryan Birmingham, whom Salinas met at in a local Subway restaurant in 2005, the band turned into The Ear Hustlers and made large strides in terms of sound and acceptance.

After drummer Brian Shaw (Transistor Tramps, Panther City Bandits) left to focus on other projects, The Ear Hustlers carried on as a three-piece, with Packer migrating behind the drumkit and trying to sing while holding down the beats. After a disastrous performance at a pool party, Packer insisted that a new drummer join the band.

They tried out several dudes before settling on then-17-year-old Ryan McAdams, whom Salinas and Birmingham knew from the kung fu studio that all three regularly attended. Although McAdams is half the age of the band’s oldest member and still legally unable to drink alcohol, he got the opportunity mainly because of his intense approach to martial arts. “Whatever he does is full-hearted,” Birmingham said.

Thanks to regular three-times-a-week practices, McAdams quickly picked up the material. He contributed to the instrument switcheroo by showing up to practice one day with riffs he’d written on the keyboard. Not only does switching music-makers break the monotony for a band so dedicated to rehearsal, it also keeps songs fresh and egos in check. If a song has potential but is not working, the guys will switch instruments to see if things click better. “It keeps the floor pretty open,” McAdams said.

After a year’s worth of polishing, The Skeeves took the Fate Lions’ recommendation and rented a hotel room for a weekend near Nourallah’s Pleasantry Lane Studios in Dallas. The producer was apparently impressed by the synchronous perfection the band brought to the three-day recording session. He also suggested ditching The Ear Hustlers tag. “He thought it sounded too bluesy,” Packer said. McAdams came up with The Skeeves, and it stuck.

Naming a band that’s all over the place, in a musical sense, is a challenge, but the name The Skeeves does capture the poppy seediness that is ultra-modern yet faithful to the band’s influences, especially Sebadoh and Dinosaur, Jr. Keyboards, in particular, help differentiate the assorted styles that go into every song. The band will use just about any effect –– from “haunted house” to psychedelia to Salinas’ vintage Wurlitzer –– to give a song an identity. In “Dancing Gravedigger,” a menacing hum tempers what is otherwise a dance track. In “Title Unknown,” an upbeat traditional keyboard sound gives the song a happier feel.

Creating the song fundamentals is a group process, but whoever shows up with lyrics gets the privilege of singing the song. To date, about half the songs feature Packer; the other half bear Birmingham’s mark. Both sing in a similar range, though Birmingham claims to be the one hitting the high notes, but each lyricist/singer offers unique subject matter. Packer is responsible for the darker, more disturbing tunes, but “a lot gets misinterpreted,” he said. A quick listen to “Scratch” might convince a listener that the singer is into sadistic dismemberment. However, the song is “really about how much I love something and how I don’t want to lose it,” he said.

If, to some ears, The Skeeves embody the darker, more obscure side of things, the band will consider the journey worth the effort. To really hear the band’s music, though, Packer said, “You gotta think outside the box. If you follow it word for word, of course, it’s going to gross you out.”