As predicted months ago by Static, the Trans-Texas Corridor has more lives than a cat and simply refuses to go away. Governor Slick Rick Perry’s wet-dream to cut our state into huge pieces that would divide cities, towns, farms, and school districts for unnecessary, foreign-owned toll roads that only the most affluent could afford is threatening to come back to life, thanks to several bills recently introduced into the state legislature.

The eminent domain land grab — sworn to be a dead issue by the guv himself — is being resuscitated by Rep. Larry Phillips (R-Dist. 62) via House Bill 3789, which, according to Terry Hall, founder/director of Texans Uniting for Reform and Freedom, would reauthorize “Public Private Partnerships (PPPs) and … grant the private toll road developers control of not only the toll lanes but also non-toll lanes, frontage roads, buildings on the tollway, parking areas, rest stops, ancillary facilities, and more” for periods as long as 50 years. 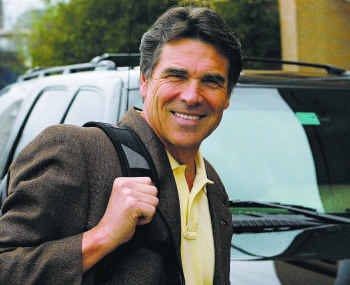 Not to be outdone, the Texas Senate has just passed SB1007, which would allow for the sale of private roads “to the highest bidder on Wall Street for portions of the Grand Parkway around Houston,” Hall said.

In total, Hall continued, there are more than two dozen bills that have been introduced in the State House that would allow the sale of Texas’ infrastructure to private companies to some degree.

“This is a legacy-building item for him,” Hall said. “Perry wants that big fat road to have his name on it.” It also endears him to the global private interests he’ll need to run for president, warned Hall.

Quitting a job that pays six figures has never been so difficult. Back in February, tax assessor Betsy Price announced she was resigning her county office to run for mayor of Fort Worth. However, she was remaining on the job until county commissioners found a replacement. That left her vulnerable to criticism for accepting a county salary while campaigning for a city job. So, this week, Price encouraged the county commissioners to hurry up the recruiting process and find her replacement. And, until they do, she’ll work for free.

“We appreciate her willingness to work through the process without compensation,” County Judge Glen Whitley said.

So let’s get this straight. Price is forgoing her $130,000-a-year salary and working for free while she spends hundreds of thousands of dollars campaigning to become Fort Worth’s next mayor, a job that pays $25,000.

Politics is so confusing.