“I was in a cab in New York. The cab had a sign ‘Please do not smoke. Christ is our unseen guest.’ … I figure if he could overcome being nailed to a cross, I don’t think a Marlboro Light’s gonna faze him that much.” Matt Harlock and Paul Thomas’ documentary American: The Bill Hicks Story chronicles the stand-up comic’s short, turbulent life. The film is scheduled for a regular theatrical release in Dallas next month, but you can see it tonight only at Dan’s Silverleaf. The screening is at 8pm at 103 Industrial Dr, Denton. Tickets are $10. Call 940-320-2000. 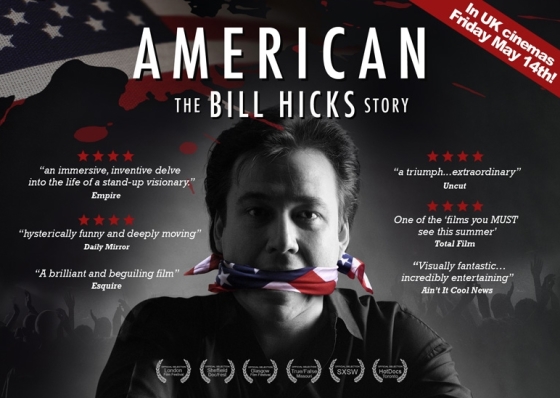 The Slovenian guitarist Mak Grgic (last name pronounced grrr-gich) closes out the season for Fort Worth Classic Guitar Society with an eclectic program that includes Bach, Boccherini, a guitar transcription of one of Brahms’ late piano pieces, and a sonata by Nejc Kuhar, a 23-year-old fellow Slovene. The concert is at 7:30pm at Modern Art Museum of Fort Worth, 3200 Darnell St, FW. Tickets are $35-75. Call 817-498-0363.

A bunch of collegiate theater productions are taking the stage this weekend, and while UTA is doing Doubt, TCU is putting on another play that uses the “what really happened?” trick. It’s Theresa Rebeck’s Spike Heels, an examination of sexual harassment in the workplace. The show runs Thu-Sat at Hays Theatre, 2800 S University Dr, FW. Tickets are $5-10. Call 817-257-8080.

Of all the many outdoor events going on this weekend (including numerous Easter egg hunts), your best bet is likely the old standby, the Main Street Arts Festival. Besides the usual spring fair attractions, the musical acts include Ozomatli, Rosanne Cash, Keb’Mo’, Better Than Ezra, and Brave Combo. The festival runs Thu-Sun at Main St between 4th and 9th sts, FW. Admission is free. Call 817-336-2787.

Teresita Fernández’ glass-and-aluminum installation “Starfield” is already on display at Cowboys Stadium, but now you can get a much more in-depth look at this artist’s work at the Modern Art Museum’s Focus exhibit. She uses industrial materials such as stainless steel and graphite to depict natural phenomena like rainstorms and waterfalls, an approach that raises a whole host of provocative questions. The show runs Apr 17-Jun 19 at 3200 Darnell St, FW. Admission is $4-10. Call 817-738-9215.

The Texas Rangers bandwagon rolls on effortlessly, as, Cliff Lee or no Cliff Lee, the team appears to have picked up where it left off last year, with hot batting obscuring some very good pitching and fielding performances. This week the home team welcomes its division foes the Los Angeles Angels. The series runs Apr 18-20 at Rangers Ballpark in Arlington, 1200 Ballpark Way, Arlington. Tickets are $3-215. Call 817-273-5100.

Studio Movie Grill is doing a good deed for the next eight days by showing the Whole Foods Do Something Reel festival. Each of these seven documentary films raises consciousness about a different environmental issue, and it should be nice to see these in a setting other than 1919 Hemphill. The series starts with Suzan Beraza’s Bag It, which looks at the role of plastic in our ecosystem. The event runs Apr 19-27 at 225 Merchants Row, Arlington. Tickets are $8.75. Call 817-446-4440.