Political conspiracy theories in America have been around since the colonists fought loony old King George III for independence. Although both the conservative and liberal fringes of the United States have historically been capable of spinning ape-shit ideas about radical agendas driven by shadowy cabals of powerful people, these days most of the weird stuff comes from right-wingers.


Some polls say that more than 40 percent of the Republican Party believes that President Obama wasn’t born in this country, which would mean that the mainstream media (all of it, not just The New York Times), the Democratic Party, and Hawaiian state officials are colluding to suppress information and keep him in the Oval Office. And if you think that sounds unlikely, you must be an elitist socialist queer. 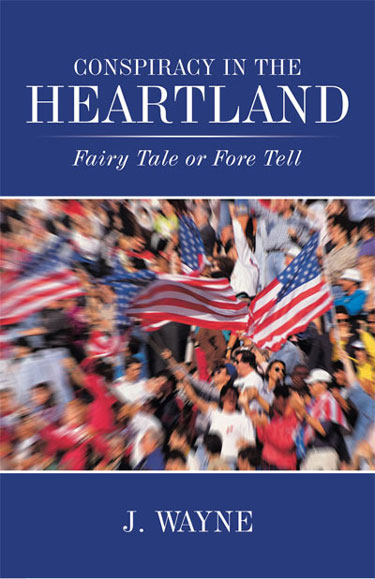 The so-called “birther” theory, which mainly resides within Tea Party activist circles, is addressed briefly in a recently published novel called Conspiracy in the Heartland: Fairy Tale or Fore Tell. That theory is just a single star in a vast glittering galaxy of paranoid ideas represented in this very strange tale. According to the press release provided by the book’s Indiana-based vanity publisher, author J. Wayne is a native Fort Worthian, an Army veteran, and an engineering grad from the University of Texas at Arlington. “J. Wayne” could be a pen name that pays tribute to the conservative icon and gun-toting movie star of so many Hollywood Westerns and adventures, because the writer has created as the story’s hero a 6’4″ ex-Green Beret named Pat Riot (combine those two, please). Mr. Riot’s motives are as unimpeachably pure as his hand-to-hand combat skills are formidable. But he doesn’t just win the battle or rescue the hostages a la The Duke in this epic right-wing fable –– he and his God-fearing, freedom-loving friends form a “brotherhood of the Heartland” that wages a campaign against political correctness and financial control of America by international banks. Spoiler alert! By forming citizen militias across the country, they restore states’ rights, strict Constitutional interpretation, and traditional family values to the land.

At this point, I could bare my liberal fangs and tear apart this awkwardly written yarn, but that would be just as predictable as the Tea Party-friendly agenda behind Wayne’s self-described “fairy tale” about secularism and globalism run amok. To be clear, there is much in this book that’s intended to offend all of the usual targets: secular liberal Jews, gays and lesbians, Latino immigrants, Muslims, feminists, you name ’em. But if Wayne’s partisan motives are worn on his sleeve, his bizarro combination of literary, political, and pop-culture references is far less obvious. While it was clear from the start which direction the author wanted his story to go, for three quarters of the book I honestly couldn’t predict how he was going to get there.

The novel’s plot goes like this: Arthur King Richman, a European financier who wants to rule the global economy via a one-world socialist government, has rigged the last two U.S. presidential elections with the consent of The Bushman (George W. Bush), Hellbeast (Hillary Clinton, I’m pretty sure), and the superstar racial minority candidate Chiman (Obama, obviously). Richman is greatly helped by a toxic concoction of political correctness brewed by a coven of East Coast media witches who feed their poison to both elephants (Republicans) and jackasses (Democrats) until the two morph into toothless, accommodating creatures known as jackophants (presumably, moderate Republicans). There’s also a bloodthirsty Mexican illegal named Criminal Extranjo who has pulled off The Twin Tower Murders, which is apparently related to but not the same as 9/11. This evil syndicate is guarded by jackbooted lesbian guards called Feminazis.

The heroes are a little more surprising. Besides Pat Riot, you’ve got Jessica Rabbit and Roger Rabbit from the 1988 partially animated comedy Who Framed Roger Rabbit?, toons who are eager to help the “brotherhood of the Heartland.” I can’t explain to you why they’re here, but they give the book an extra special, unmoored-from-reality kick. Tom Sawyer, Huck Finn, and Aunt Polly also save Pat Riot’s life on at least two occasions and help him form state militias with the help of Texas Gov. States Rights (wild guess –– Rick Perry?!). The final line is “and they all lived happily ever after.” Except, presumably, Al Gore.

After all this, you may have the same questions I had. Is Conspiracy in the Heartland a satire of firebrand Tea Party rhetoric written by someone intent on ridiculing the movement? Possibly, but the allegory is certainly not controlled enough in content or clever enough in delivery to make for a good lampoon. Did J. Wayne write his political “fairy tale” –– with its earnest boy’s adventure tone, lack of profanity or sexual situations, and ubiquitous talking animals –– for older children? Maybe so. But if he wants the Tea Party whippersnappers to read an effective takedown of socialism that also features talking critters and absurd situations, he should endorse George Orwell’s Animal Farm instead.

Conspiracy in the Heartland: Fairy Tale or Fore Tell