There’s a lot going on beneath the surface of Fort Worth artist Timothy Harding’s work, although it’s not always apparent at first. He earned a master’s in painting at TCU and currently specializes in stark, somewhat detached drawings, paper sculptures, and installations. The works are large-scale and employ carefully composed bits of bare-bones industrial material –– paper, extension cords, fluorescent light bars –– that confront the viewer with lines, angles, edges, bright white light, and shadows.


The fact that Harding is very spare in his use of color and contrast suggests he’s not interested in easy emotional manipulation, although he definitely hopes to inspire a reaction in the viewer. “I’ve always appreciated those massive abstract paintings,” said the artist, 27, who grew up in Irving. 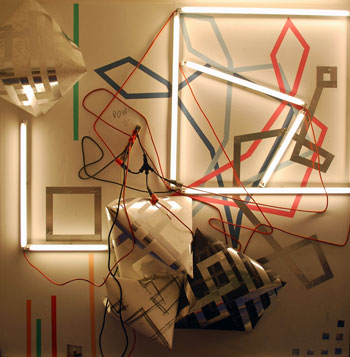 Harding’s early influences include Jackson Pollock and Mark Rothko. “They have a real presence in the room,” he said. “I’d like my work to be aggressive in that way and maybe inspire a little bit of fear. Many of the works have their own lighting system. I’d like people to think ‘Could this be a fire hazard?’ ”

Harding’s installations, which often take up entire walls, suggest journalistic exposés of modern corporate and communications systems. “Light Experiment # 2” (2009) features a bloom of folded dark-gray paper protruding from the center of an abstract industrial shape whose lines are created by extension cords stapled to the wall, a favorite technique of the artist’s. He also does simple extension-cord drawings that recreate iconic pop culture images like Bart Simpson (2010’s “Bart”) as well as famous paintings like the French Romantic artist Theodore Gericault’s 19th century “Raft of the Medusa” (2010’s “Medusa Cord”). Harding’s extension-cord lines look like distilled patterns of illustrations, suggesting his fascination with the underlying patterns of art and life.

“My work in general is this active investigation of stuff,” Harding said. “I think about the relationship of the individual to systems and infrastructures like highways, cityscapes, and business. I use the extension cord because it’s a simple, universal object that’s crucial to allowing systems to work. There are extension cords everywhere in our lives hidden behind furniture and running through office cubicles.”

The artist cites some non-visual art influences, including progressive metal bands such as Rage Against the Machine and Hella, the films of Stanley Kubrick, and the architecture of Frank Gehry and Zaha Hadid. Harding is also a TV news junkie who’s fascinated (and more than a little pissed off) by the way global economic forces affect individuals. He read Karl Marx’s The Communist Manifesto when he was a teenager and believes it still offers a potent critique of the dehumanizing aspects of capitalism that have come to be accepted as a part of life in the Western world. Indeed, Harding says one of the reasons he does so many installations is that they are more about art as an experience than as a commodity. They exist for the length of a show and then disappear after closing night.

Speaking of shows, Harding was the only Fort Worth artist selected to participate in this year’s Texas Biennial. His massive multimedia installation, “Don’t Forget to Dot the I in Power” (2011), was the first piece to greet viewers entering Box 13 ArtSpace in Houston. The artist also is preparing for a one-man show in July at the Fort Worth Community Arts Center that will include one large installation and several smaller works commenting on it. He hopes to further develop the sense of wry humor intended in his work and communicate it effectively to viewers.

“I try to address a few different audiences with the work,” Harding said. “There’s the intellectual crowd, which part of me fights against, but I am curious about what they think. And then there are people who don’t know a lot about contemporary art. I want to create something that’s cool for them too.”

Over the last few seasons, Ballet Concerto has been running on high-octane fuel, assembling impressive casts of dancers for the company’s annual outdoor festival in Trinity Park Pavilion. The 2011 version happened last weekend and was an enthusiastic display of three varied styles: classical dance, dramatic story ballet, and Broadway high-stepping.

Associate director Webster Dean’s staging of a suite of variations from Raymonda, the group’s nod to the classical era, opened the evening with nicely prepared ensembles led by Michele Gifford and Shea Johnson. Gifford, a former Texas Ballet Theater principal, gave a sultry performance of her variation set to Glazunov’s exotic balalaika music, and Arizona Ballet’s Johnson flew across the stage in a series of marvelous leaps that recalled his glory days with Arlington’s now defunct Metropolitan Classical Ballet.

The meat of the evening came with Luis Montero’s dance adaptation of Federico García Lorca’s House of Bernarda Alba, a chilling look at a house in mourning after the patriarch’s death and the tyrannical rule of his widow over their five daughters. Veteran dancer Margarita Bruce was a fierce Bernarda, even when dancing a stylized, stately flamenco alone in a wistful look back at happier days.

Unlike the play, which has no male characters, the ballet gives us Pepe, the town lothario, who secretly woos both the eldest and youngest daughters. Ably danced by Grant Dettling, Pepe succeeds in winning a promise of marriage from the heiress, strikingly portrayed by Katie Keith, and seduces the youngest, danced by Gifford.Montero uses the music of Isaac Albeniz and Joaquin Turina to underscore the seething Spanish drama in what is one of his most successful ballets.

Ending the evening on a brighter note was a playful performance of Christine Hay’s Broadway-style romp Gershwin Gold, set to the popular American composer’s show tunes “I’ve Got Rhythm,” “Walking the Dog,” and “Summertime.”

Ballet Concerto lucked out with ideal weather for several years until Mother Nature turned ugly last June, washing out much of the weekend. This year’s heat wave wilted everything but the dancers. –– Leonard Eureka