We’re not the biggest Tolkien fans at Night & Day, and we’re surprisingly unenthusiastic about the prospects of Peter Jackson’s upcoming Lord of the Rings prequel. However, we can’t possibly pass up Theatre Arlington’s stage version of The Hobbit. “Why?” you ask. It’s simple, really.


This version has a mostly female cast. As many people have noticed, J.R.R. Tolkien’s fantasy world isn’t a very female-friendly place. Director Melanie Mason decided to remedy this by casting most (though not all) of The Hobbit with women and girls. 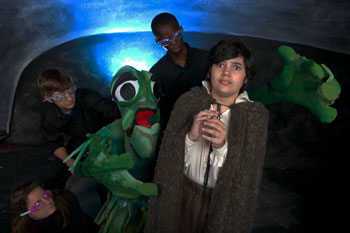 We can imagine Tolkien purists clutching their copies of The Silmarillion at this news, but we’re rather excited ourselves. Sometimes a simple flip of genders can reveal a whole other side of a classic. And if the male actors here are cast in the female roles, this will officially be Tarrant County’s most fabulous theater production this summer. The show’s only playing for two weekends, so hurry and catch this distaff version of the fantasy-adventure saga.