A team from sunny San Diego that wears ugly uniforms with cartoon lightning bolts on the shoulders thundered into Dallas and shocked the Cowboys during last night’s preseason game on national TV.

On a positive note, the aerial shots of Cowboys Stadium look bad-ass during the broadcast.

The roof is clean, shiny, slick, and modern. 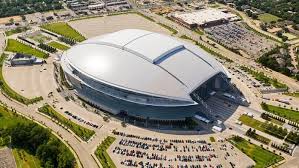 Remember the aerial shots of Texas Stadium during those final years?

Here’s an overhead shot from the final game played at Texas Stadium in Irving:

Watching Felix Jones run like Barry Sanders, and seeing new runner Phillip Tanner bust through the line and into the end zone after losing his helmet, made me proud to be a fan.

It also brought two phrases to mind: “Marion Barber” and “addition by subtraction.”

All in all, the game was entertaining. The Cowboys defense is a work in progress, and quarterback Tony Romo still hasn’t looked comfortable after two preseason outings, but the team is showing promise. With Jones running, budding star Dez Bryant catching (yes, he dropped one last night but he’s still a beast),  and a rested Romo passing behind a new offensive line led by amazing rookie tackle Tyron Smith, I’d say the future is clear:

The Cowboys are a shoe-in for the Super Bowl in February.