If Texas painters didn’t have the vast expanse of terra firma known as Big Bend, what would they paint? And don’t say “bluebonnets.” Or “breakfast tacos.” Or “guns and hilariously large pickup trucks.” Something about that magical Southwestern land ignites in Texas painters a lust for the panoramic, the elegantly warped, the graceful, for the very face of Mother Nature herself. But why?


Nostalgia for times never lived but viewed on TV and read about? The challenge of plein-air painting in the crossfire of drug traffickers? Allergies? Now, Texas is full of painters (and photographers) who would probably rather portraitize a class of rowdy third-graders than spend one minute artistically interpreting the natural world, where the weather pretty much determines the attitudes of muses, there’s no Project Runway, and critters –– some fanged, some poisonous, some fanged and poisonous –– abound. But damned if seemingly half the Lone Star State’s population of exhibiting/professional artists isn’t a little obsessed with the area, whose flora, fauna, and, uh, rock formations have been the sources of painterly flights of artismo for decades and whose essence is now beautifying a couple of exhibition spaces in town. 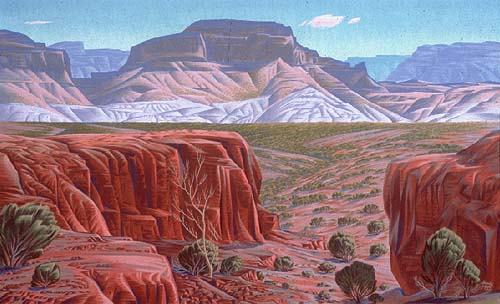 Big Bend’s evolution from indigenous American land to outdoorsy retreat to artistic mecca –– spurred by businesslike cooperation among members of the U.S. Congress, advertising executives, and snakes –– reaches an apotheosis with painter Alexandre Hogue (1898-1994), whose marvelous, incredibly stylized elucidations of the area’s colors and shapes are the highlights of the retrospective hanging at the Fort Worth Museum of Science and History through November. With bluebonnets, a kind of daffy joy is implicit in the dizzying hue of the flowers and the fact that they’re pretty much always depicted in a group (a clique?), never alone –– family portrait, anyone? With Big Bend (specifically its topography), the brutal, rugged, take-your-breath-away landscapes dotted by plucky cacti and the occasional badass lizard pretty much serve as one big backdrop. All bluebonnets –– and bluebonnet paintings –– pretty much look the same, so they don’t present nearly the same technical challenges to artists or elicit the same meditative awe from viewers as the dynamic, always undulating, downright musical Big Bend area, the artistic heart of Texas.

Hogue, who was born in Missouri but lived and died in Dallas, cranked up his palette to a volume that blinds what came before, even though he remains little known today. Though some of his work at the FWMSH is restrained, a lot is nearly unhinged. Multihued and intoxicating (and sprawling), it reflects an idealistic eye, no doubt a byproduct of an eco-conservationist perspective that Hogue embraced at an early age and clung to throughout his life, including in the late 1970s and early ’80s, when he first trained his focus on Big Bend. Photorealism is never the point. In one of his best pieces, “Lava Capped Mesa, Big Bend,” a majestic bluish plateau hovers in the distance as reddish-orange rock formations in the foreground aspire to the texture of velvet. Part postcard, part visual document, the painting borders on graphic design, with its neat brushstrokes, bold colors, and lack of close detail, but somehow is totally transportative.

Charming cartoony effects throughout the series harken back to hyper-Modernism, the style du jour of his formative years. The bushes in “Canyon Totem Erosional Remnant” are plain and angular, suggesting the kind of movement intrinsic to Jet-Age art/architecture, and Hogue pays little attention to lighting, opting instead to flood his canvases with unadulterated color, bright or muted. Greenish-yellow mountains unfurl in “Cretaceous Clay Ridge, Big Bend,” and the blue in “Oasis, Big Bend” is as rich-looking and syrupy as if applied with a magic marker.

Throughout his long career, the self-taught artist generated so many variegated canvases –– of bucolic reverie, portraiture, architecture, op-art, pop art, graphic design, calligraphy, pure abstractions –– that his output is simply too copious, too grand to be resolved neatly into just several dozen landscapes, no matter how triumphant and novel they are. “Avalanche by Wind” (1944), the piece that greets gallery visitors, is a rather heavy-handed pro-conservation allegory from his Dust Bowl series but one in which any sense of didacticism is erased by the excellence of the brushstrokes: Soft enough to dip a spoon into and eat, the flowing waves of sand that partially obscure a set of train tracks stretching toward the viewer from a small hunter-green farm compound in the distance reflect in texture and density the gray-yellow storm clouds above –– a steam train barrels down the tracks, unaware of its fate. The sand waves stand almost as high as the weary telephone poles running alongside the tracks.

Even though Hogue can’t rightfully be classified as photorealist, he still invested a lot of sweat equity in his work. Every hair on the crossed hands of the sitter (probably Hogue) in the 1936 pencil portrait “Howdy, Neighbor” are visible though hardly distracting. No one would confuse the drawing for a photograph, because it’s better, more whimsical, more idealistic. The sitter –– a middle-aged, mustachioed white man in a dress shirt, tie, and sweater, hands folded on a farm fence, holding a paintbrush –– wears no expression and has no light in his eyes but still seems so pensive, thoughtful. He’s probably a lot more cognizant than most of us.

Hogue is on much less sure footing when delving into abstraction. Abstracting nature isn’t the problem –– one of the exhibit’s most rewarding pieces is “Untitled (Osage),” a drawing/watercolor/painting of, clearly, water flowing gently over rocks but in which the lines are thick and blocky, and the vibrant greens, blues, and browns, kissed occasionally by frothy white, are unlike anything seen in nature. Where Hogue mistakes simplicity for elegance is in the pure abstractions. The lines and colors are too pushy, too balanced, too calculated to convey anything resembling the mission of non-representational/abstract art: to be self-expressive but also to comment interestingly on the wider context of Art-with-a-capital-A. However, Hogue’s semi-abstract Moon Shot series, whose chief subject is the space age (lots of planets and rockets), is endearing, especially to anyone fascinated by or who actually remembers those days.

But Hogue was indeed a visionary, and, like few artists before, he can really bring his landscapes into the minds of urban viewers, creating between the stone-and-glass canyons of the city idyllic retreats, ones that undoubtedly may inspire more than a few viewers to pack up their own paintbrushes and head west.

In North Texas, the name Dennis Blagg has become synonymous with Big Bend. For years, the co-founder (with twin brother Daniel Blagg) of Artspace 111 has been studying the terrain, and if he’s painted anything else, no one knows. Unlike Hogue, Blagg is a master photorealist, capturing shade and nuance down to the slightest molecule, which would be problematic if his scenery wasn’t so captivating. Epic plains, shadowy canyons, graceful waterways, lively flowers, and hulking rock formations call out to viewers from his canvases, and some of his most recent takes on Big Bend are hanging now at Artspace 111 as part of Big Bend Journey, a group show with two other longtime Fort Worth greats: Cindi Holt and Jim Malone. While Holt is the closest in spirit to Hogue –– self-taught, she works in tidy shapes and brilliant colors –– Malone is furthest away, employing contemporary techniques and materials (even using a magnifying glass and light to “burn” lines onto his paper canvases) to achieve his haunting, startlingly precise, black-and-white photorealist depictions of the area.

Alexandre Hogue: An American Visionary -— Paintings and Works on Paper