Concerns about gas drilling near the Comanche Peak Nuclear Plant are prompting some observers to question state and federal agencies that insist the drilling is safe.

The critics aren’t local. Most residents of nearby Glen Rose seem to firmly embrace the plant. Somervell County was among the state’s poorest until Comanche Peak was built in the 1970s, creating jobs and tax revenues that benefited Glen Rose’s schools and business community. 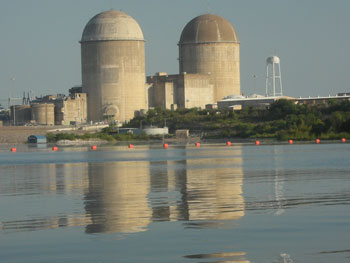 The locals weren’t much concerned when gas drilling began on the Luminant-owned property surrounding the power plant. Some eyebrows were raised last summer after a natural gas pipeline was accidentally punctured several miles away, creating a huge explosion that killed a utility worker and injured seven others. But overall the locals have paid scant attention to the gas drilling near the plant.

Others, however, are watching from afar. Natural gas exploration has been linked with various environmental problems, but it’s the industry’s alleged role in inducing earthquakes that worries activists. Some of them are questioning the state’s approval of drilling near the power plant and the dam that holds water in Squaw Creek Reservoir. The water is crucial for cooling the nuclear reactors.

“Historically there have been tremors and small earthquakes where there has been drilling,” said Karen Hadden, executive director of Austin-based SEED, a group that advocates sustainable energy strategies for Texas. “You don’t want to increase seismic activity anywhere near a reactor.”

The science that connects drilling to earthquakes is still murky. That’s even more reason to be cautious, Hadden said.

“It’s not an experiment we want to try to run,” she said.

Fort Worth-based Quicksilver Resources applied for a drilling permit in June 2009 and eventually drilled for natural gas on property near the nuclear plant, dam, and reservoir. How near is the drilling and what are the risks? Depends on whom you ask.

U.S. Nuclear Regulatory Commission spokeswoman Lara Uselding said gas drilling near power plants is safe as long as it’s done in accordance with NRC regulations — and the natural gas wellheads near the power plant are in compliance.

“I’ve been at this site and spoken to our resident inspectors,” she said. “We are aware of it, and we are regulating it.”

The NRC prohibits exploring or exercising subsurface mineral rights within 2,250 feet of any seismically qualified building or within 2,800 feet of the plant’s two containment buildings. Federal regulators said the closest gas wellhead is more than a mile from the plant, and the horizontal drilling doesn’t reach any closer than 4,200 feet from the plant’s containment buildings and dam.

But a local activist questions those numbers.

Sharon Wilson writes Bluedaze, a web site that criticizes the drilling industry for environmental shortcomings. She and another activist, David McFatridge, scoured Quicksilver’s permit application with the Texas Railroad Commission, including a survey of a proposed drilling site. The survey didn’t include structures such as the power plant, but provided the latitude and longitude of the wellhead. The information allowed McFatridge to create a satellite photo using Google Maps and to develop his own survey, which put the drilling much closer to the dam and the plant.

According to McFatridge’s self-made map, the wellhead is about 2,600 feet from the dam, and 5,000 feet from the plant. This means the horizontal drilling frack lines could stretch underneath the dam, Wilson said.

Quicksilver spokesman Stephen Lindsey said several wellheads are in the vicinity, with the closest being approximately 4,000 feet from the dam and almost 9,000 feet from the plant. The drilling is highly regulated and safe, he said.

“We can’t just go out there and drill,” Lindsey said.

Still, a breach in the dam could be disastrous, and drilling shouldn’t be allowed near nuclear plants, Wilson said.

Studies show a correlation between the drilling industry and earthquakes, although the industry typically disputes the claims with its own studies. Anecdotal evidence abounds. Most residents had never heard of earthquakes in North Texas until recent years when drillers flocked here to explore the Barnett Shale formation for natural gas. Since then, reports of seismic activity have increased.

Cliff Frohlich sees a correlation between earthquakes and the drilling industry, but with a caveat. Frohlich is senior research scientist at the Institute for Geophysics at the University of Texas at Austin and author of Texas Earthquakes. He said horizontal fracking doesn’t induce earthquakes, but the final process of injecting used frack fluids into disposal wells is linked to tremors. Old fracking fluid is trucked to disposal wells and injected, under pressure, thousands of feet below the surface. Sometimes those fluids flood into fault lines, causing a shift.

“In some cases, not very often, when people inject fluids back into the ground, it causes small earthquakes,” he said.

The largest earthquakes associated with disposal wells have registered at roughly 3.3 on the Richter scale, he said. A quake of that intensity shouldn’t affect a nuclear plant built to withstand much stronger seismic activity, Frohlich said.

“A 3.5 earthquake is pretty small,” he said, describing it as similar to a sonic boom or clap of thunder. “I’m not an expert on engineering, although my sense is, any reasonable structure would probably withstand earthquakes that small.”

Again, some residents aren’t so sure. They point to a Feb. 25 letter written to Grand Prairie city officials by U.S. Army Corps of Engineers Col. Richard Muraski, who recommended that the city not allow drilling within 3,000 feet of the Joe Pool Lake dam to avoid a “catastrophic event.”

Activists saw the letter as a smoking gun — proof that federal officials had linked gas drilling with the potential for catastrophes near dams.

Grand Prairie officials expressed concern about the phrase, and the Corps issued another letter on April 18 that promoted the 3,000-foot setback but dropped the word “catastrophic.” Anti-drilling activists suspected a cover-up. And they figured if drilling could cause a catastrophe at Joe Pool dam, it could cause one at Comanche Peak.

Corps spokesman Randy Cephus said the first letter written to Grand Prairie was “a little harsh” and open to conjecture, particularly since the Corps has done no studies on gas drilling’s impact on dams.

“There was basically one word — extreme terminology — and that’s why we wrote the second letter trying to tone that down,” he said. “We don’t really know what the impacts are. We want to do some studies to make that determination.”

After a 2006 study of the Joe Pool dam, Corps officials expressed concerns about the structure’s age and building standards. The Corps, which oversees numerous dams across the country, is currently studying whether dams can be stressed from nearby drilling, Cephus said. Until the study is completed next summer, no drilling is being allowed near Corps dams.

“All of our infrastructure is aging,” he said. “It’s a nationwide issue. We have concerns [about] hydrofracking. We don’t have the data on it, and that’s what we need to get. We don’t want to do anything to put an undue strain on a public infrastructure. Public safety comes first.”

The Corps, however, doesn’t oversee the Comanche Peak dam, which is owned by Luminant and overseen by the federal government.

“Have you seen anything that proves that it’s safe to drill and frack that close to a nuclear plant?” Wilson said. “What do they have to show that it’s safe? Did they do any kind of studies?”

“The NRC requires that every U.S. nuclear plant be designed to withstand the most severe and historically recorded earthquakes (and natural phenomena) expected in the area around the plant,” Uselding said in an e-mail. “Comanche Peak has onsite seismic instrumentation that collects and records data when activated at an extremely sensitive ground motion.”

Ground motion from nearby drilling has never triggered the seismic instrumentation or recorded any recognizable event at the plant, she said.

As for the disposal wells that are allegedly linked to earthquakes, none are in the vicinity of the plant. Used fracking fluids are trucked to licensed disposal facilities “outside the proximity of the plant and the dam area,” Quicksilver’s Lindsey said.

The assurances sound good but still ring hollow to critics such as Tom Smith, director of the Austin office of Public Citizen, a nonprofit group that lobbies for public benefit. He said the long history of design and construction problems at Comanche Peak doesn’t instill confidence when it comes to drilling — and possibly inducing earthquakes — nearby.

“What happens to the stability of the dam in case of one of these events?” he said.