After several decades’ worth of movie directors’ sons taking up their fathers’ line of work, now we’re seeing directors’ daughters do the same, and not a minute too soon. The results have been unsurprisingly mixed. On one hand, Sofia Coppola’s films have borne no resemblance to the ones that made the reputation of her father, Francis Ford Coppola. At the other end of the spectrum is Texas Killing Fields, the first movie directed by Ami Canaan Mann, and it’s exactly the sort of story that would attract the interest of her father, Michael Mann. The comparison doesn’t flatter this cop thriller, with its extensive echoes of the elder Mann’s Manhunter and Heat. Yet if we see this movie purely as a directorial debut, it’s not an unpromising one. 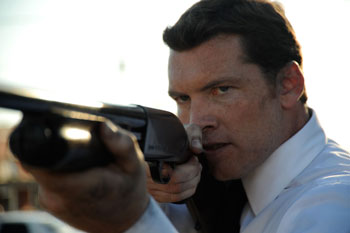 The bulk of the film takes place in Texas City, on the Texas coast, where transplanted New Yorker Brian Heigh (Jeffrey Dean Morgan) works as a homicide detective, partnered with hotheaded local boy Mike Souder (Sam Worthington). A hideous case comes their way when a 15-year-old runaway girl turns up murdered in their jurisdiction. Heigh thinks their case is related to similar killings in other counties, but Souder wants them to stick to their own neighborhood, not least because working with other law-enforcement agencies might bring him back into contact with his ex-wife Pam Stall (the ubiquitous Jessica Chastain), a homicide cop in the next county. Heigh and Souder kick into high gear when the killer taunts them by phoning them from his latest murder site, just so that the cops can hear the victim’s dying screams.

As is often the case with her father, Ami Canaan Mann isn’t content with treating this story merely as a police procedural. She uses the murders to take a look at the ins and outs of rural policing and the challenges of retrieving crime scene evidence from a swamp during rainy weather. The racial tension between Texas City’s white and African-American communities is an element in the background, as is the uneasy cooperation between those communities’ criminal elements. A significant subplot is given over to a local girl called Little Anne (Chloë Grace Moretz), a drug addict’s daughter whom Heigh tries to protect from her mom’s unsavory friends.

Trying to encompass all these things is a laudable sign of ambition, but the neophyte director can’t quite get a handle on them all. Donald Ferrarone’s script suffers not only from loose ends but also loose middles, with characters disappearing for long stretches so that we wonder what they’ve been up to when they do reappear. The director stages a couple of action scenes with some gusto, including Souder’s brawl with a couple of lowlifes in an empty roadhouse and a bloodbath in Little Anne’s house after the girl has fallen into the killer’s hands. Yet these don’t have the crispness or the vividness of Michael Mann’s or indeed most other good action directors’.

Ami Canaan Mann makes good use of the bayou’s twisted trees as a phantasmagoric backdrop for foul deeds. (The movie was actually shot in Louisiana.) Anyone who watched The Debt will chuckle at the reunion of Chastain and Worthington, portraying these rumpled Texas cops so soon after pretending to be icy Israeli agents. No one will be laughing, though, at the deeply scary performance by Stephen Graham as one of the guys hanging around Little Anne’s mother. This clean-cut little man with glasses doesn’t look like much, yet when the cops visit Little Anne’s house, he gives them all kinds of attitude and doesn’t even smile while he’s doing it. There’s no bravura or smugness or anger in what he’s doing, just a cold certitude of putting Souder in a wheelchair if he tries to handcuff him.

These elements are encouraging, yet none of them make Texas Killing Fields stand up on its own. If your taste runs to gritty detective stories that use murder as a way of exploring wider social contexts, there are lots of better movies (last year’s The Secret in Their Eyes, for one). If you’re just looking for escapism, you’re probably better off staying home and watching TV.