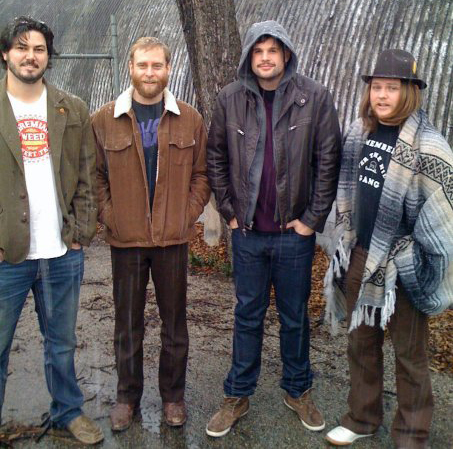 With help from a supporting cast that includes keyboardist Aldridge, guitarist Big Mike Richardson, drummer Matt Mabe (Stella Rose, Quaker City Night Hawks, Jefferson Colby), harmonium player Jordan Roberts (Calhoun), and vocalist Ray Liberio (The Me-Thinks), EPIC RUINS are so hip a doctor could put them in a fallen grandma to get her walking again. (Wah waaah.) Seriously, few bands in North Texas are as sweeping, as tastefully grandiose, and as, well, epic as ER, whose debut full-length, 2010’s Void Mariner and the Mystic Boogie of the Sacred Line, is a superb concept album (!) complete with trippy guitar wonkery, extended passages that bleed into one another, blurring song beginnings and endings, and a strong, occult/fantasy-filled narrative thrust. Syrupy riffage over thundering beats often gives way to ethereal, chill acoustic-based reverie, and Anderson’s vocals are alternately smoky-smooth and bluesy-bellowin’. Imagine Mitch Ryder fronting Pink Floyd with Mick Ralphs on gut-tar. That’s EPIC RUINS. The band has been writing new material at Smoke Tardis, The Me-Thinks’ rehearsal space in Haltom City, and has recorded main tracks for one new song and part of another at Barry Eaton’s Swamp Studio in Justin. The new song “steps out of key a lot before sliding into a smoldering groove in the choruses,” Steward said. “By the end, it kind of breaks down into this samba-esque jam. It’s danceable with chunky guitars, but it’s also kind of a weird, schizophrenic song. I don’t know if the lyrics for it are the final copy yet –– we’ve been kind of wandering away from the ‘digital afterlife’ concept” (“Burning Hotels, EPIC RUINS,” Aug 24, 2011). “I think we’re just excited to try something out live, without a safety net.” The last time EPIC RUINS played the Fort was in July at Lola’s Saloon for our annual Fort Worth Weekly Music Awards Festival. Since your American League champions aren’t playing Friday, there’s no excuse for missing EPIC RUINS’ return-to-the-Fort show at The Where House (2510 Hemphill St, Near South Side, 817-913-7777), with Fort Worthian indie-rockers Skeleton Coast and an apparently pretty big, pretty well respected band from not-here called Stardeath & The White Dwarfs. The show will definitely be psychedelic. Each band has its own lighting guy; EPIC RUINS’ is Zaq Bell, an ex-Fort Worthian producer who now lives and works in New York City. The show also will be pretty loud. EPIC RUINS and Stardeath will play the following night, Saturday, in Austin at the bar/restaurant known simply as Frank for Zombie Uprising II, a gathering of the pretend undead organized in part by former Fort Worthian and current Austinite Marcus Lawyer (Pablo & The Hemphill 7, Top Secret … Shhh!). Get Where House tickets at prekindle.com.