At one point during Stage West’s top-shelf revival of George Bernard Shaw’s 1894 comedy Arms and the Man, a seasoned manservant tutors a lady’s maid on the secret to being a successful servant: “The key to get on as a servant is the key to get on as a lady –– know your place.” There’s more than a little gleeful irony here, because the Irish-born Shaw was a crusader for improving the lives and economic conditions of both women and workers. But he also had a keen empathy for the universally ridiculous human condition, so in his 50-odd plays he satirized hypocritical elites but rarely demonized them. That’s the key to the Shavian brand of intelligence: Explore the plight of the underdog but don’t completely dismiss the keepers of the status quo in the process. 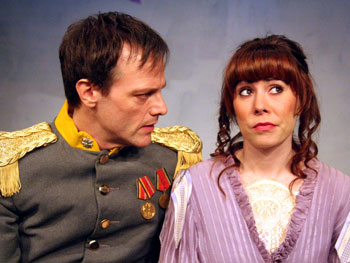 This kind of sophisticated balancing act is why Shaw’s best plays never come across as tiresome political rants. Director Jim Covault and his cunning Stage West cast are completely in tune with the playwright’s generous but unsentimental worldview. As a result, their Arms and the Man ably registers as a brainy romantic comedy that challenges notions of class, gender, and patriotism while reminding audiences that at some point both the oppressors and the oppressed are bound to make asses of themselves.

The play is set at the close of the 1885 Serbo-Bulgarian War, a proxy conflict largely engineered by outside forces. Maj. Petkoff (Jerry Russell, in amiable dunce mode) and his future son-in-law Capt. Sergius (an exquisitely pompous Samuel West Swanson) are hailed as conquering heroes by their fellow Bulgarians despite the fact that they have little knowledge of war. Petkoff’s inquisitive daughter Raina (Cassie Bann) certainly worships her father and husband-to-be, as does her class-conscious mother Catherine (Emily Scott Banks). Their domestic situation is invaded one night when the Serbian enemy soldier Bluntschli (Mark Shum) crawls through Raina’s bedroom window and pleads for protection. It turns out he’s a jaded Swiss mercenary whose participation in the Serbian army is a paid gig, so war holds no patriotic value for him: When not soldiering for profit, he prefers chocolate candy to bullets. Meanwhile, romantic and class confusion arises when Raina’s scheming maidservant Louka (Morgan McClure) becomes involved with Sergius and drags the family manservant Nicola (Dwight Greene) into the fray.

If Arms and the Man sounds a bit tangled, it is, but it’s never sloppy or contrived. Shaw was a master of fusing large casts with disparate themes and somehow creating scripts that seem intimate and epic at the same time. His overriding notion in this play seems to be that grand illusions –– be they about heroism in war or romantic love or the class system –– must be deflated if people ever hope to connect with one another in a meaningful way. None of the characters in this play seems quite the right fit for the role that society has doled out, and the chafing against those confines is a struggle that Shaw clearly cherishes.

Thankfully, Covault has encouraged his cast to assume a snappy comic tone instead of an earnest one, and everyone gamely keeps the gentle absurdity bubbling along. As Raina, Bann mixes intelligence and naivete in a very winning way –– her Raina always seems to know more than she’s letting on, but her impetuousness clouds her judgment. Shum brings delicacy and understatement to the mercenary Bluntschli, a role that could easily be performed without color or imagination. As Raina’s status-driven mother, Banks gets terrific comic mileage out of Catherine’s shifting ideas of what “civilized” means –– at one point, she insists she is too high-class to raise her voice to the servants even as she carelessly hangs laundry to dry in the sitting room. There are moments when McClure seems almost too contemporary, too psychologically intense as Louka, the maidservant who insists she was born for higher things. But the actress is never less than fascinating to watch, and in the end, she reflects Shaw’s timely and timeless qualities.

Arms and the Man raises issues that bedevil us to this day, and Stage West’s sterling revival keeps the master playwright’s ideas entertaining and enlightening.

Arms and the Man