Maybe Galveston Island would be as famous as Ellis Island if some foreign government had thought to put a landmark like the Statue of Liberty over there. Nevertheless, the Texas port has a proud history of welcoming immigrants to Middle America. As well as being the second-largest immigration port in the nation, it was also at one point the largest cotton-shipping port and for much of the 19th century was the largest population center in Texas. 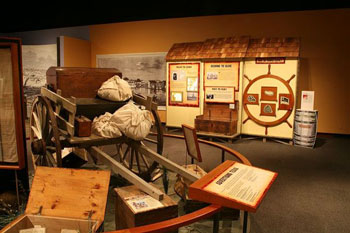 That history is the subject of the Fort Worth Museum of Science and History’s newest exhibit, Forgotten Gateway. Starting as a port for slave labor in the pre-Civil War era, Galveston took in more than 100,000 immigrants between 1845 and 1900, including 10,000 Eastern European Jews. Unlike Ellis Island, whose immigrants were mostly European, Galveston welcomed immigrants from Latin America and even China. The thriving city was home to a number of firsts in Texas, including the state’s first-ever post office, naval base, opera house, telephone, and electric lights.

In addition to covering Galveston’s heyday, the exhibit will also undoubtedly touch on the Galveston Hurricane of 1900. This bit of history shouldn’t go unnoticed as we head into a new year.