Assailing the evils wrought by corporate greed and government cowardice is a noble — if not original — intent. But just as the protester who looks like she’s been at a rave all weekend makes it hard for conservatives to take Occupy Wall Street seriously, sloppy writing can blunt the force of a novelist’s politically charged response. The GOP and its plutocratic masters are easy targets. Unfortunately, novelist J.M. Richardson’s aim is terrible. 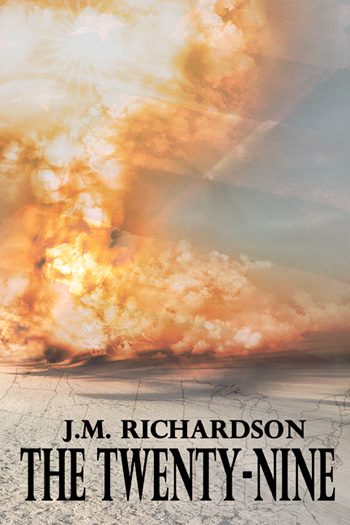 The Fort Worth author and high school teacher’s debut novel, The Twenty-Nine, opens with the American military fighting on its own soil, due to the secession of 29 red states after Cindy Chandler, guilty of being a Democrat and female, becomes President of the United States, inspiring all of the states with Republican governors to agree to form their own republic. As U.S. Marines –– including the book’s main character, Derek Putnam –– fight their way through Carrollton against Texan rebels, a nuclear bomb goes off in Dallas.

From there, the novel flashes back to the 29 months before the atomic strike, Month 1 to Month 29, introducing other principals, from high school student Kyle, who’s learning to form his own opinions, to the aforementioned Marine, to President Chandler herself. Like Kyle, both Derek and Chandler are about to make a jump into life-changing events, he with a quick decision to enlist and she trudging through the last weeks of her presidential campaign against a hard-hearted GOP incumbent. All three get what they desire. Kyle impresses a girl he likes by his thoughtful response in a class debate, Derek completes boot camp and takes his shut-in mother to a steak dinner, and Chandler moves into the White House. Of course, things immediately start to sour, at least for the grown-ups. Derek and his mother discover she may be terminally ill, and President Chandler’s administration is met almost immediately by an unthinkable exercise of states’ rights.

Since the chapters count back the months leading up to Dallas’ atomization, you’d think there would be a certain rhythm in the narrative, one that quickens the tempo the closer it gets to Judgment Day. But there isn’t. The plot rockets toward the last page not because it’s gripping but because Richardson piles on  the action as if he were trying to build a Dagwood sandwich as fast as possible without bothering to consider whether or not his cold cuts are past the sell-by date.

Details are Richardson’s nemesis. Minor characters, like a lowly presidential assistant, have first names; major characters, like Texas Gov. Spencer, who actually leads the secession, only get titles and last names (unless his name is actually “Governor”). If Richardson wants you to pay attention to a character, he usually tells you what he or she is wearing, but other than that, the characters are flatter than the Panhandle and twice as boring. Since most of the principals are ostensibly good guys, they all parrot the same message of wealth inequality and corporate greed. Find the most inarticulate OWS sign, and this is pretty much what the characters talk about — and mostly in interchangeable voices. Kyle the teenager and Derek the Marine sound the same. Kyle’s hot, attentive girlfriend sounds a lot like President Chandler. Republican villains mostly sound like Foghorn Leghorn, but that’s because they’re mostly from the South.

Still, lots of popular authors get by with cardboard characters — Tom Clancy’s entire oeuvre is built on fictional soldiers and politicians who couldn’t hold down a piece of vellum in a sneeze — but Richardson’s fear of filling in the blanks makes his thin cast inexcusable. Take, for example, the idea of more than half the country’s governors unanimously agreeing on something, let alone agreeing on something at the same time. Apparently, in the not-too-distant future of Richardson’s America, state legislatures immediately fall in with whatever a governor wants to do. To even begin to sell a narrative conceit as monumental as a sudden red state secession, an author would have to do a lot of research on the governments of the 50 states.  Think about the hassle involved in getting a building rezoned or a liquor license approved. Now multiply it by a state-sized level and then do it 28 more times, understanding that most states have significant differences in legislative organization, not to mention political composition. It’s a giant pill to swallow, and no amount of sugar will make it go down, though Richardson seems to think, This huge thing just happened, and that’s that is the right chaser. That logic might be tolerated in the first few verses of the Book of Genesis, but there are no talking snakes in The Twenty-Nine, though if there were, they would probably sound just like Gov. Spencer.

While Richardson completely fumbles his execution, at the heart of this mess are ideas that, had he actually given them serious thought, might have made for a page-turner. There’s a tasty theme about the endgame of America’s bilious political conversation begging to be teased out, but between dialogue that’s tinnier than a used-car commercial’s and the paper dolls that utter it, such a redeemable thread is buried. The message is obvious and repeated so frequently that you may cease to care.

Finally, there’s the issue of the Occupiers, who are nowhere to be found in this plot. The book was probably finished long before the OWS movement took to the streets, but if there had been an opportunity to hash out three or four more chapters about OWS, they might have made for a little bit of seasoning, which this book so desperately needs. As two and a half years roll by, you never get the sense that any of the characters age or mature, even as secondary characters die. What was life like during those two years? And what of the world’s reaction to the last superpower splitting in two and attacking itself? Why aren’t the Republic of America’s citizens worried about China? Because isn’t that a big red state thing? While The Twenty-Nine gets a gold star for participation and a grabbing concept, it belongs in the corner as punishment for not doing its homework.

The Twenty-Nine, by J.M. Richardson