Last month, Fort Worth Weekly told readers about Sharon Baker’s battle to repair her crumbling Eastside home (“Seeking Shelter,” Dec. 21, 2011). In 1964, she saw her mother and father shot to death there. Since then she’s had what some people might characterize as an unhealthy fixation on the house, where she still lives as a disabled recluse. 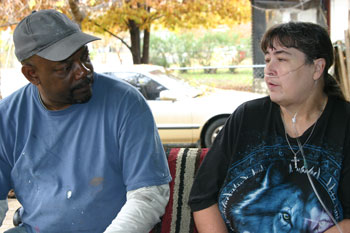 Fort Worth’s Code Compliance Department had given her until Jan. 23 to make repairs or face stiff fines. Baker showed up at the Building Standards Commission meeting on Tuesday, waving her Weekly clipping, asking for more time to make repairs, and saying that local pastor Harold Kuykendall was promising to help do the work. The commission granted Baker a 90-day extension.

“I’m hoping Pastor Harold can help me do some repairs that will get Code off my back, but I’m actually looking for a house to move into,” she said.

She thinks it will be cheaper to find a new house than to try to renovate her 1930 house that’s clearly seen better days. Still, she hasn’t had any luck in getting grants or other help from nonprofit agencies. “It gets real disheartening,” she said.

For the past decade, Fort Worth city leaders have resisted allowing gas drillers to inject toxic, intensely salty frack fluids into disposal wells inside the city. The moratorium is one of the few victories that anti-gas drilling activists can claim — it remains the only significant example of city officials playing hardball with drillers. On the other hand, that resolve appears to be weakening. Lately, city officials have been lamenting the damage to roads caused by heavy drilling trucks carrying frack water to wells outside the city limits. Talk like that is usually the first salvo in attempting to reverse course. (And, oh, by the way, the heavyweights around Alliance Airport want one.)

It doesn’t help when the city’s public education specialist Marty Harrison sends out an e-mail announcing a series of public meetings to discuss lifting the ban — and begins by saying, “Gas drilling has increased the need for saltwater disposal wells.” Fort Worth League of Neighborhoods, the League of Women Voters of Tarrant County, the drilling industry, and Hillwood Development Co. have been asked to provide representatives to participate in panel discussions over the next month, at which the public can submit questions. If you think disposal wells (which may cause earthquakes — see our cover story, page 9) are a dandy addition to the landscape, you can probably relax. Otherwise, consider turning up at one of these sessions, all of which start at 7 p.m.: