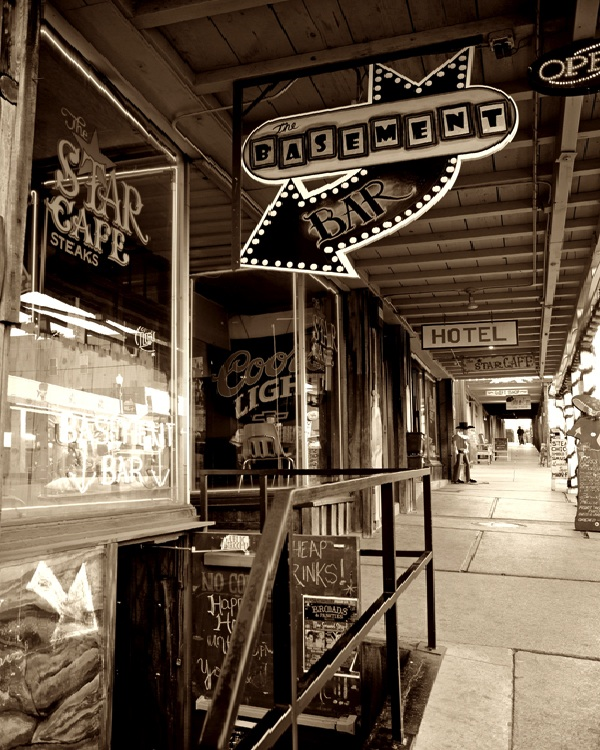 Have you read the big (long-winded?) cover story yet (pg. 9)? Well, speaking of live music venues, have you been to The Basement Bar? Because it’s a pretty legit place for a show. I feel like it flies under Clubland’s radar because its Stockyards location is outside the range of a lot of local music fans — I know it’s a lot easier to park your car on West 6th Street and amble between shows at Lola’s Saloon, Magnolia Motor Lounge, and The Grotto. But if you can get a DD, a cab, or, I dunno, stay sober, making the trek to the shit-kicking hinterlands around Main and Exchange is worth your while.

When you descend the stairs from West Exchange into The Basement Bar’s dimly lit environs, you’ll probably get the idea that it’s basically a mini-Lola’s, which would make sense, because it used to be the second location of the West 7th corridor venue. Lola’s impresario Brian Forella got the joint in 2009 and got out in 2010, but its current skipper, Todd Osborne, hasn’t changed anything but the signage. In other words, it’s the same dark, smoky underground bar it was a few years ago, with good sound and a decent amount of floor space. For, you know, kicking shit.

It’s true. I’ve seen a fair amount of two-stepping in The Basement Bar, but the joint is more than a smoky cellar packed with line-dancers in bedazzled jeans and cowboy boots. Over the past year or so, the bills there have been a lot more rock-centric; if you’re in a band that can bring, like, 30 or 40 people, the place will look full — a band that can draw nearly 100 will make it look like the hottest spot in town. And in all honesty, the place deserves the sort of rep that more centrally located clubs have, because the staff treats bands like professionals, even if the musicians suck.

As Fort Worth’s live original music scene continues to expand, you might as well give each new venue a try — I never thought I’d enjoy a show at another off-the-beaten-path place, The Cellar by TCU, but the Madras gig I caught there was one of the best shows I saw last year. And since we’re talking about it, check the paper and see who’s playing at The Basement Bar this weekend. Maybe we can split a cab. –– Steve Steward

I’ve always been fascinated by brand loyalty, especially when it comes to beer, or, more specifically, macrobrews. I thought about this on Saturday while tending bar at The Where House. We had PBR on draft and Tecate in a can on account of Cinco de Drinko. And most people were fine with this, because it was cheap and it was all that was available. But there was this one guy …

This dude was about 9 feet tall, mustachioed, and missing his two front teeth — picture Richard Kiel as an angry NASCAR fan, and you’ll get the idea. I don’t remember the band’s name, but the 9 p.m. spot was filled with this Nickelback-ish outfit that had brought a lot of the Boozefighters MC in, and I gathered that this guy was there to see the band. I’m pretty sure he was drunk when he got there, and I wasn’t super excited to serve him, because cutting him off was probably going to be an ordeal. Solution: I moved to the other side of the bar like a total chickenshit, leaving my sweet friend Nicole to handle him.

Nicole told him we had PBR and Tecate; I looked over as his face knotted into a furious scowl.

In 15 years of getting drunk, I’ve never been picky about the flavor on tap. Oh, sure. I might start out that way, but after three or four Buds, Yellowbellies, or Silver Bullets, I don’t really care — if you lined ’em all up and made me take the Pepsi challenge, I’d probably just ask you to put them all in the same pitcher and give me a single glass. But this guy seemed pretty steamed. His buddy bought him a shot of Crown and he angrily stomped away.

He was back two minutes later, and I manned up and faced his grimace. “You want another shot of Crown?” I asked.

“Gimme a Tecate,” he demanded.