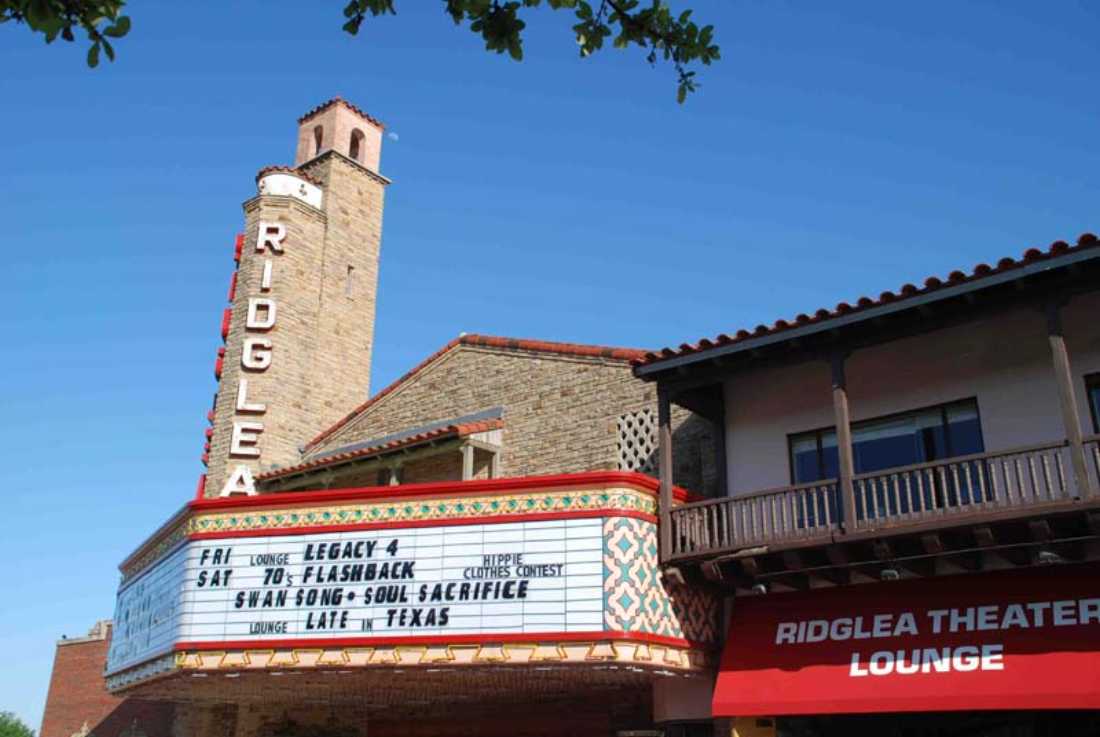 Of all the peculiarities and hassles surrounding the Ridglea Theater’s renovation, the oddest one in my mind was how the Ridglea Bar, now rechristened as the Ridglea Lounge, opened for all of 11 days last March. It didn’t have its liquor license, but it soldiered on anyway with a “free week” of live music and a BYOB policy. When I got a tour of the Ridglea Theater complex from longtime Ridglea manager Richard Van Zandt, he talked about how they hauled out 10 hefty bags of empty beer bottles while the register had recorded a whopping $2 in sales. “That business plan sucked,” he said. I said I felt sorry for the bartenders.

Now the Ridglea Lounge has its permits, and indeed, the bar, a gorgeous fort of blond oak, has some bottles on its shelves. And it’s open, at least on weekends. Though the theater’s website claims the lounge is open from 5 p.m. to midnight Tuesdays through Thursdays, I went there last Tuesday around 6 and was greeted by a locked door. “We might be open on Wednesdays and Thursdays starting next week,” Van Zandt said, “but we’ll see.”

In my experience, “we’ll see” is your (and my) dad’s way of soft pedaling –– i.e., “It’s not gonna happen” –– but if you’re in the neighborhood next Wednesday, say, to purchase something from The Gas Pipe next door, go see if the Lounge is open. However, if you’re in the neighborhood to eat at Which Wich or go to the cleaners, be sure to repark your car on the Ridglea Theater side — parking and zoning have been at the heart of the whole “What’s up with the Ridglea?/Why isn’t The Moon opening?” mess. Even though Ridglea owner Jerry Shults now owns both sides of the complex as well as the parking lot behind the theater, I wouldn’t mess with the security hawks who keep an eye on who goes where they park their cars. The parking lot Nazis in this town are as persistent as they are petty, and it goes without saying that they are very, very petty.

Anyway, the Ridglea Lounge looks nice, especially if you like murals of pirates, and it has a good-sized stage and huge sound system. During last year’s curious soft opening, the decibels were so loud The Gas Pipe’s merchandise apparently fell off the walls. Van Zandt blamed that on an overzealous engineer, but I’m not so sure. When I was there last week, some workers were testing a newly installed internet jukebox, and the gi-normous mains hanging from the ceiling were thunderous. I guess The Gas Pipe should move its glassware to the side of the store that doesn’t adjoin the Lounge. That, or sue.

While the Lounge is allegedly open for business and the theater has already hosted a few events (a 4/20 party with Zeppelin and Santana tributes, a sold-out autism benefit featuring Temple Grandin, an ongoing weekly church service), what interests me the most is the construction in the west side of the complex, where the new Moon was supposed to go. Van Zandt said it’s shaping up to be a 300-or-so capacity room with a full kitchen and the freedom to commit bong-shattering volume levels. “This,” he said, “is the room where [Ridglea manager] Wesley [Hathaway] can book the music she really likes,” which, if you know anything about sweet, gentle Wesley, probably means heavyyy metaaal!

Of course, if it’s a big enough heavy band, Wesley will put them in the Theater –– that room holds 1,300. When construction crews finish the as-yet-unnamed club, they’ll move on to finishing up the Theater’s green room, which will be bigger than any local green room outside of House of Blues’ or, I dunno, Gexa’s. For starters, it will have two separate areas: a meet ’n’ greet lobby and the main room, which is almost as big as the Ridglea Lounge. In other words, if your band comes with an entourage, you’ll have a fine place to leave them while you go melt faces. Better still, the green room opens onto the back of the building, right in front of the backstage door.

Whether the Ridglea Theater realizes lots of people’s “Granada West” fantasies remains to be seen, but it certainly has the facilities with which to make those dreams happen. –– Steve Steward