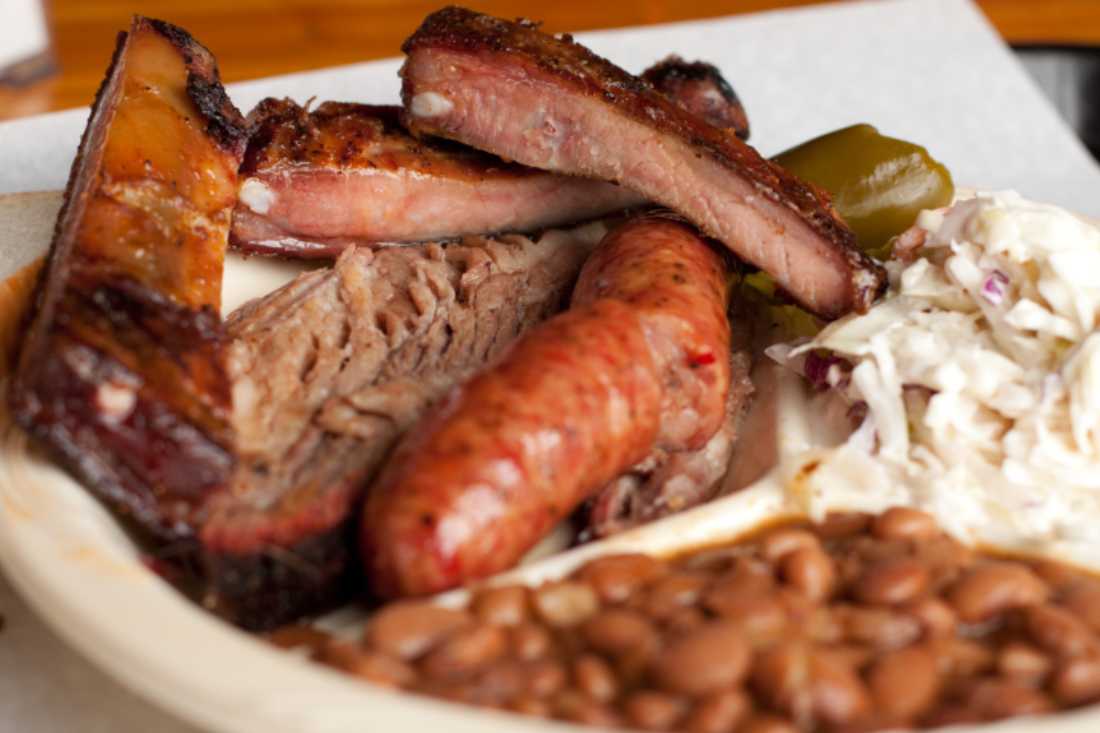 My Eastside friends always complain about how there are no restaurants in their neck of the woods. It’s true that neither Tim Love nor Jon Bonnell is likely scouting Eastside locales as a place to expand, but there’s got to be something better than fast food over there, right? I decided to take an exploratory car trip down East Lancaster Avenue to look for signs of foodie life.

Last year I visited La Rueda Mexican restaurant (2317 Oakland Blvd.) (“Eastward, Ho!” May 9, 2012) and called it “the jewel of the East Side.” I still think it reigns supreme, but Smokey’s Bar-B-Q (5300 E. Lancaster Ave.) is a pretty great first runner-up. The restaurant is set in what looks like a converted Dairy Queen, but the vintage fire truck stationed outside makes it pretty hard to miss. Inside, the dining room has long picnic tables, where customers eat elbow-to-elbow.

The menu is straightforward low and slow Texas ’cue. The portions are generous, and a self-serve buffet of sides promotes gluttony among those of us who lack willpower.

On a recent visit, the kitchen was out of chicken and turkey by the time my guest and I arrived, so we were left seeing red — as in red meat. I opted for the Eli plate ($11.69), a combination of two meats and two sides. The brisket had a nice crown of red and was superbly tender and moist. The ribs were a little on the bland side, and lacked crispiness on the outside. But the meat fell off the bones and had a nice, if mild, smoky flavor. The barbecue sauce was a tad sweet for my taste but had a subtle kick. Among the sides, the chuckwagon beans stole the show. They had just the right amount of salt and were swimming in juice with huge chunks of sausage.

As I drove by Texas Style Chicken and Seafood (3854 E. Lancaster Ave.), I could see people filing in and out of the place. When I stopped and went in, I found out that the lines were for a great bang-for-the-buck place. It’s not going to set the new world standard for fried chicken, but it’s still a step up from The Colonel.

The building is another fast-food-joint conversion. The walls are barren, and on my visit The People’s Court was blaring from a television on the wall — some guy actually let his 4-year-old son drive a scooter, and the judge really let him have it.

The three-piece chicken plate with two sides ($4.50) was remarkably cheap considering the portion sizes. It’s easy to overcook when you’re frying bird, but on both my dark and white meat pieces, the batter was crispy and the chicken was moist. The accompanying okra, mashed potatoes, and two rolls wouldn’t have gotten either praise or penalty from a foodie court of opinion. It tasted like the kind of stuff you’d get at a cafeteria. But, again, the sheer volume of the food packed onto my plate was a scientific marvel.

My friends are at least half right: There’s not a lot of great, inventive food in the wilds of East Fort Worth. Mc7th and the Near Southside have nothing to worry about in terms of restaurant competition. But for good — and occasionally great — basics, there’s no need to brave the crowds anywhere else. And considering the number of diners who apparently are roaming the ’hood whining about dining, why isn’t some adventurous chef looking to set up shop over there? It’s a crime, that’s what it is.